Jalen Hurts, DeVonta Smith and Landon Dickerson will all perform under the gaze of their former college coach 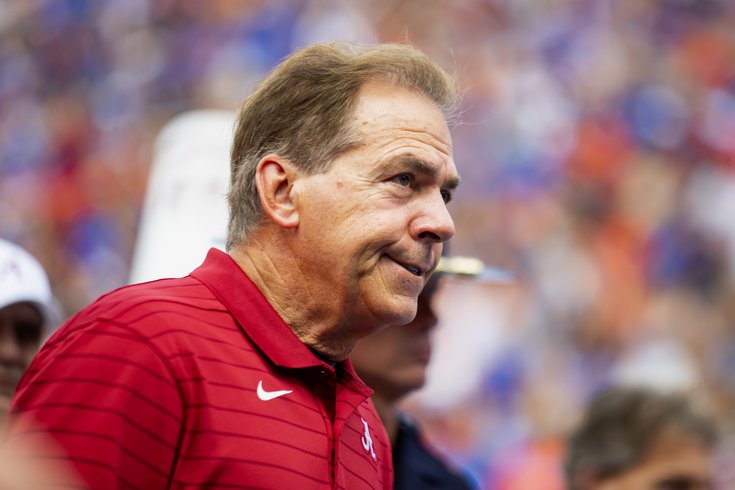 The Eagles and Cowboys will meet on "Monday Night Football" for an early season, NFC East matchup that figures to have major playoff implications over the course of the season.

The game represents a huge stage for a trio of Eagles players who came to the NFL from the University of Alabama.

Quarterback Jalen Hurts played three seasons with the Crimson Tide, rookie wide receiver DeVonta Smith starred there and won a national championship on the way to a Heisman Trophy, and lineman Landon Dickerson was a glue guy at Alabama who will be called into action Monday night to fill in for an injured Brandon Brooks.

No pressure, but Alabama head coach Nick Saban will be joining the alternate "Monday Night Football" broadcast with Peyton Manning and Eli Manning.

The legendary Alabama coach will be among four guests who join the Manning brothers during the course of the broadcast on ESPN2 and ESPN+. The others have not yet been announced.

"Monday Night Football with Peyton and Eli" has been a ratings hit through the first two weeks of the NFL season, offering an alternative to the main ESPN broadcast led by Steve Levy, Brian Griese and Louis Riddick. Though the lion's share of viewers tune in to the main broadcast, a growing number have flipped over to the looser presentation with the Mannings.

Last Monday night's game between the Packers and Lions drew 13.8 million total viewers, but the Manning broadcast pulled 1.9 million on its own, a 138% increase from the 800,000 who watched the Week 1 game.

"Peyton and Eli will bring a different approach, delving into conversation about broader, big-picture topics while also honing in on the game, much like fans do when watching with their family and friends," ESPN Chairman Jimmy Pitaro said.

Saban famously benched Jalen Hurts in the middle of the 2018 National Championship game against the Georgia Bulldogs, favoring Tua Tagovailoa to close out a thriller that delivered Alabama a title in a 26-23 overtime victory. Hurts subsequently transferred to the University of Oklahoma, where he played his final season before entering the NFL Draft.

Eagles fans watching the Manning broadcast may have to plug their ears through Eli's inevitable grumblings about Philadelphia fans, although he may have a funny story or two to share, and it may be more subdued since the game tonight is in Dallas.

This is the latest game in a brutal stretch for the Eagles, who are coming off a loss to San Francisco and face four difficult opponents in the Cowboys, Chiefs, undefeated Panthers and defending champion Buccaneers over the next several weeks. A win would go a long way.