Week 4 NFL odds: Point spread and total for every game, including Eagles vs. Chiefs 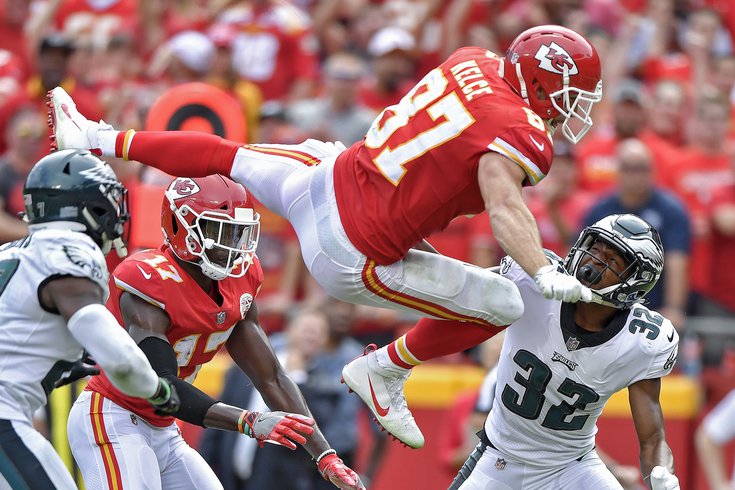 The Eagles haven't played the Kansas City Chiefs since 2017.

With three weeks of NFL football in the books, we're starting to get a better picture of the league's haves and have-nots — and there are more than a few surprises on both sides of that coin.

Sure, it's a small sample size and there's plenty of football left to play, but there were probably weren't many people who thought the Raiders, Broncos and Panthers would be among the league's undefeated teams through three weeks, while the reigning AFC champion Chiefs sit in the basement of their division.

What we'll learn over the next few weeks is whether these early success stories have the staying power over a 17-game season, and that begins this week with a full slate of games that features more than a few intriguing matchups. As we do every week, let's take a look at all the Week 4 NFL odds, most of which are certain to move at least a little before kickoff.

Unfortunately, this week starts off with a bit of a stinker, but that's often the case when it comes to these everybody-must-play-one Thursday Night Football matchups. That being said, at least there are some young players at the skill positions worth watching on both teams in this one — Trevor Lawrence, Joe Burrow and Ja'Marr Chase to name a few — so that could make for interesting viewing. The Bengals clearly seem like the safe play in this one, especially after watching the Jags last week against the Cardinals, when not even the longest play in NFL history was enough to spark Urban Meyer's team to victory.

The Chiefs haven't quite looked like the Chiefs so far this season, but that could change this week against a reeling Eagles squad. After losing each of their last two — despite averaging 29.5 points — KC will travel to Philly to face the Birds, who are fresh off an absolute shellacking at the hands of the Cowboys. Starting with this Eagles vs. Chiefs matchup, Nick Sirianni's team is heading into a brutal stretch — vs. KC, @ CAR, vs. TB, @ LV — and if they're not careful (or perhaps lucky?) they might wind up heading into a Halloween matchup against the Lions still looking for their second win of the season.

Both Washington and Atlanta are looking for Win No. 2 on the season, with each of their only previous wins this year coming against the Giants, who are quickly making their case as the worst team in football.

The Texans picked up a surprise win in Week 1, which is looking like less of a surprise the more we see from the Jaguars, but with Davis Mills again under center with Tyrod Taylor on IR and Deshaun Watson thankfully far away from the field, it's no surprise that the 2-1 Bills are big home favorites.

Both these teams are a mess right now — just look at that week-low 42-point total — and the oddsmakers aren't really telling you much here by making the Bears a three-point home favorite for this division matchup. Maybe that's because no one even knows who will be starting at QB for Chicago.

Oddsmakers don't appear to be sold on the 3-0 Panthers, making them five-point road dogs against the 2-1 Cowboys. Or, maybe that says more about how well Dallas has played the last two weeks, most recently on Monday Night Football, where they destroyed the Eagles. If they keep that up, it's hard to bet against them, even if they are giving up five points to an undefeated Carolina team.

This game is of particular intrigue to Eagles fans, with Philly already owning the Dolphins first-round pick in 2022 and potentially the Colts' as well if Carson Wentz hits a certain number of snaps. Birds fans might want to root for the upset in this one, even if it does seem counterintuitive (since they already have the Dolphins' pick and the Colts' pick still needs to convert). But the thinking here is that if Indy's season continues to go off the rails, they may bench Wentz in order to ensure that pick doesn't become a first-rounder. They need a win more than Miami.

The Vikings just picked up their first win of the season after losing to two teams who have looked decent so far (the 2-1 Bengals and the 3-0 Cardinals), so maybe they're a little bit better than they're getting credit for. That would explain why they're home dogs against the Browns, who, sure, hung with the Chiefs in a tough Week 1 loss, but otherwise haven't really faced much competition.

We already mentioned the Giants might be the worst team in the league — or at least should be in the running for that distinction when the end of the season draws near — and they'll be going up against one of the surprises this season: the Saints, mainly Jameis Winston, not because of what he's been doing, but more because of what he hasn't. Not being forced to air the ball out a ton, Winston looks capable leading the Saints, and that's bad news for the Giants.

I really don't have anything to add on this game other than Zach Wilson has looked pretty awful to start the year, but at least he won't have to try to tackle Derrick Henry on Sunday.

Now we get to the good stuff. This isn't the national game for some reason, but it might be the best game of the late slate as two 3-0 division rivals will matchup for the first time this season. The Rams look like a legit Super Bowl contender. The Cardinals could be too, and they'll prove a lot on Sunday afternoon if they can take down a clearly rejuvenated Matthew Stafford and the Rams at home.

These are the two bottom teams in the NFC West, and even they're good. Damn, that's a hell of a division. I'm just glad their games don't always overlap with the Eagles.

The 3-0 Broncos are one of the surprises of the NFL season, but can they keep it up against Lamar Jackson and the Ravens? The fact that they're only a one-point home favorite is somewhat telling, as is the fact that their three wins have come against Jaguars, Giants and Jets, three teams who are a combined 0-9 on the season. We'll find out on Sunday if Denver is legit or not.

After watching Aaron Rodgers come back (again) against the 49ers on Sunday Night Football this week, are you really going to bet against him, even if his team is a seven-point favorite?

Tom Brady's return to Foxboro should be interesting to say the least. He's cold as ice, and there's almost no doubt in this writer's mind he absolutely destroys his former team on Sunday night.

This Monday night division matchup promises to be better than the one we just watched between the Eagles and Cowboys, that's for sure. These two teams are a combined 5-1 on the season and have both looked capable of challenging the Chiefs' reign as AFC West champs. That being said, it's still early.