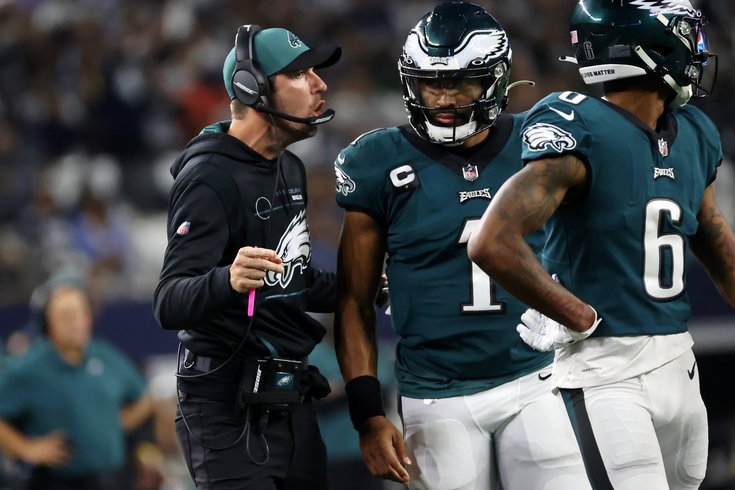 Jalen Hurts fell on the sword after Monday night's loss. Is he right to take the blame?

In fairness to Jalen Hurts, flushing it was the perfect metaphor for what was, to be kind, a poor performance during a 41-21 drubbing at the hands of the Dallas Cowboys on Monday night.

The raw numbers didn't read that bad in the final boxscore — 25 of 39 for 326 yards with two touchdowns, two interceptions, including a pick-six, and an 86.1 passer rating.

"Flush it," Hurts said of his performance. "You gotta flush it."

That wasn't the sentiment of a player who thought he performed well and was the victim of circumstance. The second-year quarterback was ready to shoulder the blame even though there was plenty of it to spread around.

The hollow Hurts numbers meant nothing outside the fantasy realm, accumulated when the game was long out of reach, the equivalent of an NFL team down 40 who had a flurry late when the dominant team is coasting and showing less if not quite little interest.

"Things didn’t go our way. It’s tough," Hurts explained. "All I can do is take complete ownership for how I played and how it affected the team in the end. I gotta do a better job, clearly."

Head coach Nick Sirianni didn't help Hurts with a game plan devised on either an Omni Frisco bar napkin or perhaps as an afterthought after finally getting over the emotional scarring of a bad setback to San Francisco in Week 2.

The Eagles' top runner, Miles Sanders, carried it two times, an affront to even the pass-happy Andy Reid or Doug Pederson and it took until less than seven minutes were left in the first half before getting Sanders got his first opportunity. By the final gun, the Eagles' arguably top playmaker outside of Hurts himself had carried it just two times for 27 yards.

Hurts bemoaned a lack of execution for everything going awry and the Eagles didn't convert a third down until deep in the third quarter. Three of the Eagles' first four possessions were three and outs.

"The first half, just with how that went, without getting a lot of plays, those numbers get skewed sometimes," Sirianni said of his perceived shift away from the running game. "Then you’re in a position in the second half where you’re down two scores the whole time, that’s where that comes into play … [Sanders] is a good playmaker and we want him to touch the ball more.

"That’s the way the game went and we weren’t able to do that."

Others weren't so keen on letting Hurts fall on his sword.

"Obviously we all know that’s not true," center Jason Kelce remarked. "Whenever you get beat like that, it’s everybody. Losses like that don’t happen just because of one guy, but that is the way you would expect Jalen Hurts to feel."

Universally regarded as a natural leader, it's Hurts' default setting to shield others.

Few will question Hurts' designation as a leader but plenty will raise an eyebrow at the "really, really good player" intimation, especially after watching Hurts' ball placement rekindle memories of Rick Vaughn coming out of the California Penal League.

Sirianni spent the spring and summer correctly assuming he would have an advantage early in the season. Turns out that edge lasted for 60 minutes of football by scheming up Hurts against another rookie head coach who came up small.

The adjustments were supposed to be slow. Instead, they've been left lane on the Autobahn speeding past Sirianni at a breakneck speed.

Now the Eagles' first-year mentor has to prove he's not a poor man's Chip Kelly and adjust to the adjustments people have already made to the coach's original plan.

Opposing NFL defensive coordinators want Hurts to beat them from the pocket and right now it doesn't look like the young QB is capable of doing that.

Accountability is great but accomplishment in a meritocracy is a whole lot better.