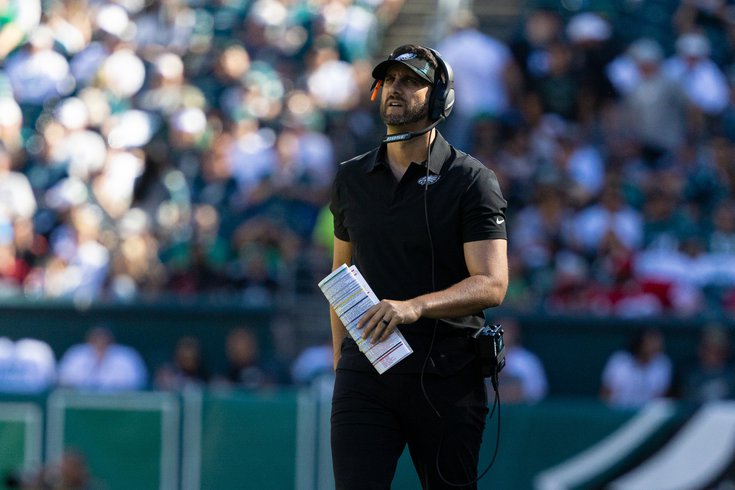 Nick Sirianni's game plans have been so odd that observers are beginning to look for answers why.

Question from Zach: How bad is Sirianni at game planning, that he had an offense that worked to keep everything on schedule week 1, and decided Week 2 to throw it deep like ten times and then Week 3 completely threw the run game out of the book? Seems like the Eagles had a formula for success — keep the distance on 2nd and 3rd down manageable for Jalen Hurts, only a week later to decide that the Eagles roster is now the 1999 Rams.

I didn't like the Week 2 play calling, especially around the goal line, but I thought the theme of the game plan was at least justifiable. The Eagles took some shots deep down the field against a team with a depleted cornerback group. They connected on a 91-yard play, and could/should have connected on a few other big ones. Being able to beat defenses over the top is a great complement to a strong rushing attack, so that at least made some sense.

Week 3 was especially bad. I agree that it was a game plan suited more toward Kurt Warner than Hurts, a couple of quarterbacks who really couldn't be more opposite. It failed to accentuate Hurts' strengths and required him to overcome many of his weaknesses. Hurts played poorly, but he was also not put in a position by his head coach to succeed.

Question from JimY: Is it possible that the offense looks unsuited for Hurts because it is and that is intentional? I feel like it's not crazy to evaluate Hurts in something more resembling what they want their long term offense to be as opposed to try and copy Baltimore for a year, move on from Hurts and have to start all over again. Given that they aren't likely to be good this year either way, I kind of don't mind that if that is what's going on.

From the first time he met with the media and several times thereafter, Nick Sirianni touted his ability to cater offensive schemes around the skill sets of three different quarterbacks — Andrew Luck, Jacoby Brissett, and Philip Rivers — in Indianapolis. It would be strange for him to go out of his way to highlight what he perceived to be checkmarks in his favor, only to run an offense that he wants to run long-term, whether it fits his current quarterback or not.

Additionally, the Eagles have a bunch of veteran players who may not have a lot of time left in the NFL, like Jason Kelce, Brandon Graham, Brandon Brooks, Rodney McLeod, Fletcher Cox, Zach Ertz, Lane Johnson, etc., who have been on the team for a long time and won a Super Bowl here. It would be unimaginable to me that the Eagles would set up a situation in which they were willing to completely piss away an entire season, further damaging those players' bodies in the process while running an offense designed to be a tryout for a guy they drafted in the second round. That's a plan that no coach and no player would ever be on board with.

We did learn in stories from Jeff McLane of The Philadelphia Inquirer as well as Bo Wulf, Zach Berman, and Sheil Kapadia of The Athletic that Jeffrey Lurie second-guessed Doug Pederson's approach after run-heavy wins against the Packers and Bills in 2019. We know that Lurie wants a pass-heavy offense, so perhaps his influence is having an effect on Sirianni's game plans. Sirianni has already faced questions about that relationship, and has said that Lurie has been nothing but supportive so far.

To be clear, I'm not trying to put down the question here. Sirianni's game plans in Week 2 and Week 3 (especially Week 3) were so strange that it's not crazy for these kinds of theories to arise, however, I emphatically disagree that setting up such an elaborate tryout would in any way be a good idea.

Question from Duce Double check: A young Hurts stood up there took full accountability for his play. Meanwhile, Sirianni was all... uuuuh... you can't run the ball when you're down two scores, and RPOs totally count as running, every time. I hope we soon see accountability from him.

Sirianni acknowledged his poor play calls around the goal line against San Francisco, which is something former Eagles coaches likely would not have done, so I think he has been accountable publicly, whether he believes he was wrong or not privately.

I did want to answer this question, however, because of the point about RPOs counting as run plays. Against Dallas, the opportunity was there to just blow them off the line of scrimmage. They had a 245-pound linebacker in Micah Parsons playing RDE, a situational pass rusher who has rarely been an early-down player in Randy Gregory at LDE, and a 280-pound DT in Osa Odighizuwa. How about just lining up and moving those guys against their will?

Question from Crackin' Crabs: Staring at the real possibility of a 1-6 start, do you think Howie will be aggressive to move veterans at the trade deadline?

It's only Week 4, and the "Should the Eagles be sellers" question is already here. But yes, if they're 1-6, in many cases they should seek to salvage value for many of their aging players.

If Hurts is absolutely horrid over a reasonably long, sustained stretch this season, then sure, bench him. But it would take a lot for me to shut him down. There are some who are already suggesting pulling him now, which doesn't make any sense. What are the short- and long-term benefits of that? I'm curious to see how he responds to a miserable outing, how he does over this difficult stretch coming up, and the improvement that he can show in the back half of the season.

Even if the Eagles select a quarterback high in the 2022 draft, Hurts could still be on the roster, and the more experience he gets, the better. They did draft him to be a backup after all, silly as that strategy was.

Question from Bleach for Nick's T-shirts: In a best-case, worst-case scenario, the Eagles maybe have three top-10 picks next year. Maybe even three top-5 if things are really nuts. If there are two top-tier QB picks on the board, is there a world where Howie goes full-on QB factory and selects two QBs to duke it out, knowing that the other will be great trade bait in a year? Or do they do the conventional trade up as needed, get your top QB, then use the rest of your riches on the trenches or secondary?

I do not think it would be a good idea at all to double-dip on first-round quarterbacks. If they like a guy in the 2022 Draft, take him, throw your support behind him, and build your offense around him.

Question from DB: If Miami pulls the trigger for Watson and Houston wants a full rebuild, would GM Jimmy make a play for Tua?

Tua stinks, in my opinion.

Question from ThatGuy: Quez Watkins has to start getting more chances right? Like where is the Eagles nerd typing furiously on his keyboard looking at the "analytics" to tell the coaching staff?

I don't think it's analytics as much as it's the fact that Jalen Reagor was a first-round pick and Quez Watkins was a sixth-round pick. But pretty clearly, in my opinion, Watkins is the better player right now, and should be rewarded with more playing time.

Question from jlinpv: Now that we are a few games in, do you have a feel for the "importance" of the LBs in the Eagles new scheme?

In Jim Schwartz's scheme, the linebackers often had Malcolm Jenkins up in the box to help with run support, which took a lot of stress off of them, and put more stress on the corners and the other safety. There were also almost always four down linemen attracting blocks. The linebackers' jobs were easier, so it was sort of understandable that the team didn't put heavy resources into the position.

In this Jonathan Gannon scheme, the linebackers aren't getting the same level of support from a box safety, and they're also tasked with having to fight through more contact as a result of Gannon's occasional three-man front packages.

It will be interesting to see how the front office adjusts their valuation of LB going forward.

Question from Pragmatic: When does Kerrigan come off the IR?

Question from Andy: Thanks Jimmy for all your work. Tommy Lawlor had a good piece about patience. We all need to chill out. I am much more concerned with the team's record the last six games of the season than the first six. Until then ignore the overreactions. When do you think we should really worry about wins and losses?

That's here, for those of you who want to check it out. Tommy makes an interesting comparison to Dolphins coach Brian Flores' start in Miami, as well as some past Eagles teams. He concluded:

Sirianni and Hurts need time to figure each other out and to show us what they can do. There are going to be some tough moments as we watch them learn on the fly. Hopefully there will be some good ones as well.

Being patient isn’t any fun. We all want answers now. My advice is to lower your expectations and to try to embrace the year of learning.

Or buy a lot of alcohol.

As usual, Tommy does a great job of giving big picture perspective.

Question from GoBirds: With the LeSean McCoy news, will they end up retiring his number? And where do you rank him in comparison to Westbrook when you consider the best of the 21st century backs?

Westbrook in his prime was better than McCoy in his prime, but McCoy was a good/great player over a longer stretch of time. I believe that retiring/withholding numbers should be reserved for the most obviously deserving players, like Reggie White or Donnie Jones. If there's any doubt, keep it in circulation. I do not think that guys like McCoy or Brent Celek qualify.

Question from ThatGuy: Does Dallas let you take food back to your hotel? Those would have made some nice morning leftovers.

Me on the way back to the hotel from the Dallas game: