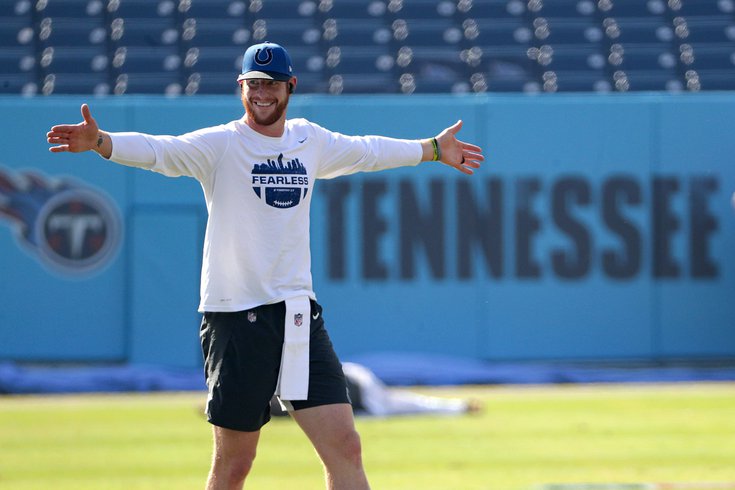 Carson Wentz extends his arms wide to demonstrate to teammates how much he distrusts the government, and their desire to turn humans into walking, talking magnets via the COVID vaccine.

In past seasons, Philadelphia Eagles fans generally rooted for their own team, and kept an eye on the rest of the NFC, with a focus on the NFC East. They'll still do that in 2021 (I guess), but there are even more peripheral rooting interests for Birds fans this season because they own 2022 draft picks from other teams.

And so, each week we'll lay out a rooting guide for non-Eagles games on the NFL schedule, and yes, I'm aware that most of the below is obvious. You can also check out the latest Week 4 odds and read all my picks, here. Ideal winners bolded.

Before we get started this week, let's take a way-too-early look at Tankathon.com. 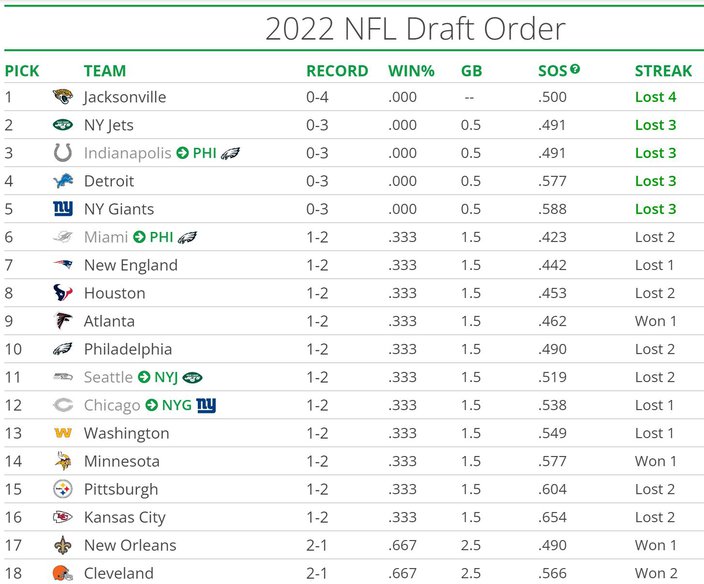 If the season ended today (it doesn't), the Eagles would have three top-10 picks!

Anyway, onto the ideal Week 4 outcomes.

• Colts at Dolphins: This is a matchup of the two teams that traded high draft picks to the Eagles. The Dolphins' pick is a first-rounder, with no conditions attached, while the Colts' pick, as you know, is a second round pick that can become a first-round pick if Carson Wentz plays 75 percent of the Colts' offensive snaps (or 70 percent, plus the Colts make the playoffs).

If the Colts are completely out of the playoff picture by Week 13 or so, they're simply going to bench Wentz to preserve that first-round pick. At some point, they're going to have to start winning a few games to remain competitive in the AFC South. There's no better time to put one in the win column than this Sunday against the Dolphins.

• Panthers at Cowboys: In a division where the Eagles, Giants, and Football Team are all bad, there's a decent chance that the Cowboys will run away with the NFC East by December. Honestly, if Dallas just cruises to a divisional title, maybe that will spur the Eagles to be sellers at the trade deadline, which is probably the best course for this team. Still, it's hard to give up hope on the season after only three weeks, so it's better for now if the Cowboys lose.

• Football Team at Falcons: If the Football Team is as bad the rest of this season as they have looked through the first three games, then it will be ideal if they win a few games so they're not in a good position to draft a blue chip quarterback. We're not there yet.

• Giants at Saints: If you look at the Giants' next seven games, their schedule is brutal:

• Titans at Jets: I think we're already at the point where it will be ideal for the Titans to lose some games just to keep the Colts in the hunt.

• Browns at Vikings: The Eagles feel like longshots to be wildcard contenders, but it's still better for the AFC teams to beat the NFC teams.

• Cardinals at Rams: Again, in the unlikely event the Eagles are wildcard contenders, the Cardinals feel like competitors for a playoff berth more so than the Rams, who appear to be favorites in the NFC West.

• Seahawks at 49ers: A Seahawks win would put both teams at 2-2. I think it's probably good practice to root for mediocrity from as many teams as possible for better draft positioning.

• Steelers at Packers: The Steelers need a quarterback, so the more games they win, the less of a threat they are to land a guy the Eagles might like in the 2022 draft.

• Ravens at Broncos: Like the Steelers above, the Broncos need a quarterback.

• Buccaneers at Patri*ts: Substitute "Patri*ts" with "Bills" in the Bills explanation above.