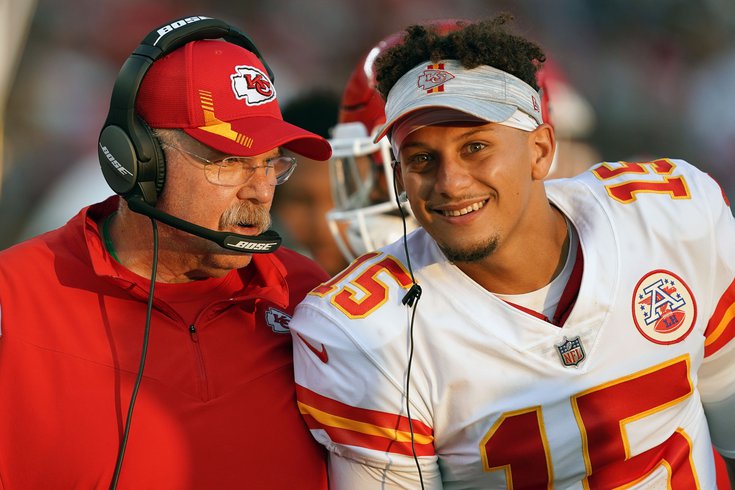 Nick Sirianni is going to bring back the run and shoot to counter Andy Reid and Patrick Mahomes.

For the gambling enthusiasts, here are my Week 4 NFL picks. To note, the team logos indicate who I think will win the game, not cover the spread. At the end of the picks, I'll note a few teams that I like based on the spread — with all lines coming via Sidelines.io.

Jaguars at Bengals (-7.5): The Jaguars are last in the NFL in turnover differential (-8), giveaways (9), and they have the third-worst point differential (-38) in the NFL. In Week 4, they're playing on a short week on the road against an up-and-coming Bengals team coming off a huge win over a Steelers team that has dominated them over the last three decades.

Urban Meyer told Broncos head coach Vic Fangio that it's like playing Alabama every week in the NFL.

In this case, with Joe Burrow and Ja'Marr Chase, it's a little bit more like playing LSU, but whatever, the result will be the same.

Chiefs (-7) at Eagles: If the Eagles' game plan Week 3 was essentially to try to win a shootout against a team that they thought was going to score a bunch of points, I can only imagine what they'll have cooked up against this Chiefs offense.

As we noted last week, I don't typically like to make my Eagles pick before I write my matchups post, but we'll make an exception here. It's not complicated — the Chiefs are one of the best teams in the NFL (if not the best, even at 1-2), while the Eagles, you know, are not.

MORE: Eagles LT Andre Dillard was pretty good against the Cowboys, with gifs and stuff | WTS: The Eagles have some problems. Big ones.

Football Team (-1.5) at Falcons: The Football Team got thumped in Buffalo last week, after what should have been a home loss to the trash Giants Week 2. Washington entered the season as a team thought to have a good roster, but with a glaring hole at quarterback. As expected, the quarterback play hasn't been good, but the rest of the roster has also been surprisingly bad. I feel like I'm calling with a pair of 3's here, but give me the garbage Falcons at home over this fraudulent Washington team.

Texans at Bills (-16): The Bills are rolling, so no need to save them for later in your survivor pool. Take the easy W and advance to Week 5.

Lions at Bears (-3): Matt Nagy said this week that Justin Fields, Andy Dalton, or Nick Foles could start against the Lions. It's always funny to me when awful teams play that game. The Bears can't protect any of them, so does it really even matter?

At least the Lions have played with some spirit under their insane new head coach.

Panthers at Cowboys (-4.5): Remember when the Eagles' defense looked pretty good until they played a team with some real offensive firepower, and they got a little exposed? Yeah, that's what's going to happen to the Panthers this week.

MORE: Eytan Shander: Win or lose, the Eagles need to at least look like they give a damn

Colts at Dolphins (-1.5): Eagles fans should be rooting hard for the Colts in this game, since the Eagles own the Dolphins' first round pick in 2020 without any conditions attached, and the Colts are going to have to eventually win some games to keep them from benching Carson Wentz.

Unfortunately, the Colts look like a complete disaster right now, while the Dolphins at least looked competent a week ago in a loss in Las Vegas behind a tough, gritty performance under Jacoby Brissett. I'll lay the 1.5 points.

Browns (-2) at Vikings: This was a tough call for me. Obviously, the Browns are a good team, but it's hard to pass up a slept-on Vikings team getting points at home.

Titans (-7) at Jets: I'm curious why this line is only 7. The Titans can score on anyone, and while their defense isn't exactly a scary group, they're playing a team in the Jets that is averaging 250 yards, 10 points, and 2.3 turnovers per game. The Jets haven't even been competitive in any games yet this season.

Cardinals at Rams (-4.5): The Rams feel like the most balanced team in the NFL right now, with a hot QB, a good OL, quality receivers, the best defensive player in the NFL, the best CB, and the No. 1 overall defense from a year ago. The Cardinals are dangerous, but I'm just going to keep picking the Rams this season until they give me a reason not to.

Ravens at Broncos (-1): The Broncos have had one of the easiest early season schedules imaginable, as they have played the Giants, Jaguars, and Jets, a trio of teams with a combined record of 0-9 and a point differential of -106. Still, credit Denver for taking care of business, as the Broncos won comfortably in all of them:

Meanwhile, the Ravens are only 2-1 because the NFL has basically decided that delay of game penalties are just sort of optional. They should be 1-2 right now with a loss to the Lions. Still, the Ravens are an experienced, veteran team, and they have been involved in three crazy finishes this season, which could help them in pressure situations going forward. Give me Baltimore in another close one.

Steelers at Packers (-6.5): The Steelers are now 1-2 after getting handled at home Week 3 against the Bengals, a game in which Ben Roethlisberger looked cooked. Their next four opponents are the Packers, Broncos, Seahawks, and Browns. The Steelers haven't had a losing season since 2003, or 17 seasons, the longest in the NFL by a wide margin after the Patri*ts had a losing season in 2020.

years since posting a losing record

That streak is in danger.

Buccaneers (-6) at Patri*ts: While Tom Brady is inarguably the best quarterback in NFL history at this point, we're watching as Bill Belichick's GOAT status is being tarnished. To begin, he's a recidivist cheater, but now it's also looking a whole lot like he needed Tom Brady more than Brady needed him.

Raiders at Chargers (-3): What a fun Monday night game. The Chargers probably have the better roster, but they've also made some boneheaded plays/decisions this season in key moments, such as an inexcusable illegal shift near the goal line against the Cowboys Week 2, and a major game management gaffe Week 3 when they scored with 32 seconds left against the Chiefs instead of bleeding the clock to near-zero and kicking a game-winning field goal. I just can't trust them yet to take action on them.