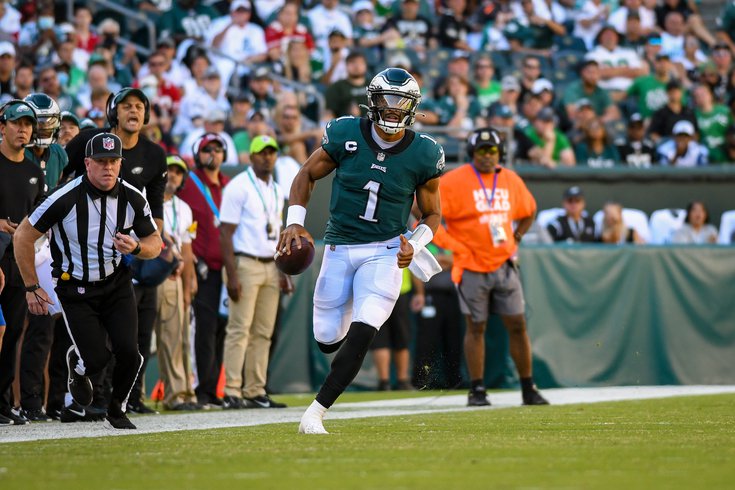 The Eagles' Week 4 matchup against Andy Reid and the Kansas City Chiefs is rapidly approaching. The Birds, who are seven-point home underdogs against their former coach's team (as he goes for win No. 100 since being fired in Philly), will be looking to get back to .500 after two straight losses, including Monday night's beating at the hands of the Cowboys.

The surprise here is that the Chiefs are also looking to pick up their second win of the season, as they currently sit in the basement of the AFC West after starting 1-2 as well. We've already looked at some matchups to watch, broken down all the injuries on both sides and provided our own predictions — as well as rounded up a slew of picks from both the local and national media — ahead of this one. Now, as we do every week, let's take a look at five numbers to watch in the form of our weekly Eagles' over/unders...

[A quick reminder for those new to our over/unders: Unless explicitly stated otherwise, these are my own numbers based on how I think the players/teams will perform on Sunday — and the advice that follows is where I would put my money if I had to. This week, only the last two are my own. The first three are all numbers you can actually bet on at FanDuel.]

When making my own prediction this week for Eagles vs. Chiefs, I came in on the under side of this one, with just a 48-point total. And while that's still a pretty big number for a team in the Eagles who haven't done a lot of scoring the last two weeks (despite their game hitting the over on Monday night), I actually think this game could easily hit the over. When you look at our staff predictions, just three have this game hitting the over — whereas all but one (me) have the total at 51 points or higher.

From an Eagles fan perspective, you really want this game hitting the under, since that's probably the only chance the Birds have to win. We saw on Monday night that they're not really equipped to win in a shootout, even against a Dallas defense that was missing a few key players. The Chiefs defense is worse — but their offense can score with the best of them, even when they're not playing at the highest level. If the Eagles want to win this one, the under will likely have to be hit, but it's seeming more and more like this one is going to be a shootout featuring one team that is just better than the other.

All of that being said, my prediction is on the under and I'm not changing it now. The one thing that may actually work in my favor here is that the Chiefs defense is the second worst against the run — and maybe Nick Sirianni learned something in that loss to the Cowboys. If you want to keep the ball out of Patrick Mahomes' hands, sometimes the best defense is a slow, methodical run-heavy offense. Combine that with the Chiefs inability to stop anyone on the ground and a week of Sirianni answering questions about those three lonely runs he called against Dallas, and there's a chance he does a full 180. If he does, the Eagles will have a better chance of keeping it close — not to mention it will be a positive sign that a young coach learned from his mistakes. I don't think the Eagles win this one, but at least seeing that would be a positive sign, and that's what this season is all about anyway.

The Eagles' second-year quarterback is averaging closer to 60 yards per game, and has been picking up a lot of that late in games with his team down, as defenses drop back to prevent the deep threat. There's nothing wrong with that — you have to take what the defense gives you some times — but it is something to consider against a Chiefs team we're expecting to be ahead for most of the game. Normally, a team playing from behind would suggest more passing attempts and yards, and that may certainly happen, but with Hurts it often seems like those late-game garbage yards more often come in the ground variety than through the air. We especially saw that in Week 2's loss to the 49ers.

Last week against the Cowboys, Hurts was the team's leading rusher both in terms of yards and attempts, but we're hesitant to suggest that will be the case again. Sure, Sirianni said they count those RPO plays that turn into passes as runs (still not sure how that makes sense), but against this Chiefs defense, he'd be silly not to give Miles Sanders and even Kenneth Gainwell a healthy does of carries. Even still, there should be plenty left for Hurts, who we see breaking off one 20-plus yard run in this one and cruising to the over against one of the worst rushing defenses in the NFL.

He's thrown three in each of his first three games and there's no reason to think he won't do that again against an Eagles defense that got lit up their last time out. Rodney McLeod may be back, but the Chiefs just have too many weapons. The only thing that might stop this one from hitting the over is if Kansas City goes up early on a rushing TD or two and then dials things back in the passing game. That being said, Andy Reid teams are never shy about airing it out.

The Birds got their first takeaway on Monday night against the Cowboys — and it was a fumble recovered by Fletcher Cox in the end zone for a touchdown. That was pretty much the only highlight in Week 3. From there, things went straight downhill.

The Birds also had their first two giveaways on Monday night as well, as Hurts threw a pair of interceptions in the loss to Dallas. Surprisingly, the Eagles aren't the only team on the negative side of the turnover battle. The Chiefs are as well, with six giveaways to just four takeaways. However, it's worth noting that four of those turnovers came last week against the Chargers — and you can bet Reid's team is going to put a premium on protecting the ball in this one.

We mentioned the Eagles slowing things down as their best chance to hang with the reigning AFC champs, but winning the turnover battle will certainly help as well — and that's something the Chiefs certainly don't want to allow to happen. If the Eagles commit to the run and don't ask Hurts to do too much, they may actually be able to pull that off, considering everything we've seen and heard about this K.C. defense. Call me a coward if you want, but I'm going to do something I almost never do here...

Much was made this week about Derek Barnett's dumb penalties, sometimes pre-snap and sometimes personal foul. He somehow always commits penalties at the worst times, so much so that you often wonder why the Eagles have him on the field in big spots. Now, with Brandon Graham out, he's playing a lot more snaps for Jonathan Gannon's defense and the Birds don't really have a choice but to keep him out there and let him play through it, even if it drives fans crazy.

I'm going to give him the benefit of the doubt this week. Don't let me down, Derek.