Eagles vs. Chiefs: Predictions, betting odds and more for Week 4 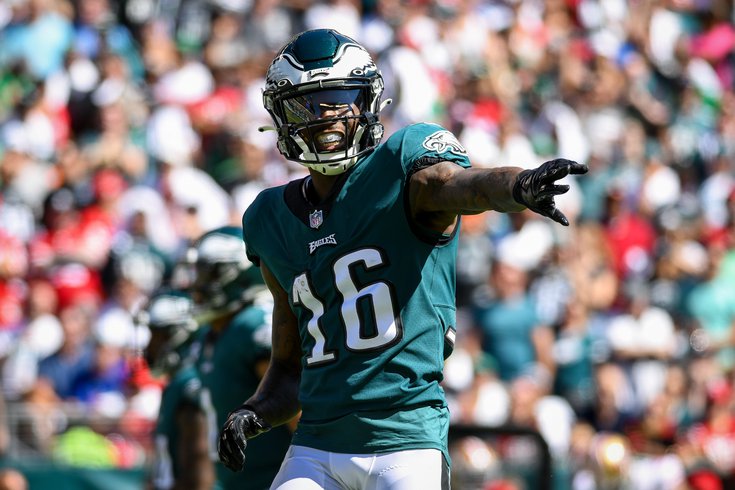 The Eagles' season — and the Nick Sirianni Era — got off to such a hopeful start with the team's Week 1 win over the Falcons. Since, things have been rapidly trending in the wrong direction. And it's not about to get any easier with a date against the Chiefs on Sunday, who are just 1-2 on the young season and are likely looking to vent some frustration against Andy Reid's former squad.

The two-time defending AFC champs currently sit in the basement of a division they've owned in recent years and will come into Philly as seven-point favorites against Jalen Hurts and Co., who are coming off a short week following Monday night's blowout loss in Dallas that featured an incredibly pass-heavy Eagles offense that would make Reid himself swoon.

The Birds would be wise to change their game plan this week against a Kansas City defense that can pin its ears back and get after opposing quarterbacks but one that is also among the worst in the NFL at stopping the run. On top of that, Sirianni has the pieces for a run-heavy attack — or at least a much more balanced one — and with a beat-up offensive line that could be without a trio of starters, maybe that's the better option to keep Hurts healthy.

Against the Cowboys, the Eagles appeared to try to keep pace with the Dallas offense rather than slow things down and extend the game. The results, as anyone watching clearly saw, were disastrous. This week, the task for Sirianni (and specifically defensive coordinator Jonathan Gannon) is even tougher as they go up against Patrick Mahomes, Tyreek Hill, Travis Kelce, Clyde Edwards-Helaire and the rest of the KC offense.

Will Big Red pick up his 100th win as the Chiefs coach against his old team? Or will the Eagles pull off an upset and send him back to Kansas City stuck at 99? Here's how our writers see this one playing out...

If the Eagles' game plan Week 3 was essentially to try to win a shootout against a team that they thought was going to score a bunch of points, I can only imagine what they'll have cooked up against this Chiefs offense.

As we noted last week, I don't typically like to make my Eagles pick before I write my matchups post, but we'll make an exception here. It's not complicated — the Chiefs are one of the best teams in the NFL (if not the best, even at 1-2), while the Eagles, you know, are not.

I am not going to let myself get fooled into thinking the Eagles can beat the Chiefs. I fell into the trap last week, when I was the only person who chose the Birds over the Cowboys and they got their asses beat pretty good.

The Chiefs have disappointed so far this year and they probably will take it out on the Eagles. Not only do I think Philly will fall to 1-3 after Sunday, but I think Travis Kelce will feast, as will Patrick Mahomes and every other fantasy-relevant person on Kansas City’s offense. Fire them up and watch them rake in the points on the Eagles beat up defense.

On the other side of the ball, Hurts will have less time than he’s had all year with the offensive line likely missing three starters. KC will cover the spread easily and you’ll be changing the channel before halftime.

This is not your typical matchup of 1-2 teams. After all, there's a reason why the Eagles are seven-point home dogs against the Chiefs — and honestly, it's hard to even envision them covering after watching Dallas do basically whatever it wanted on both sides of the ball on Monday night. Is there a path where the Eagles can actually win this game? Maybe, but right now it's hard to find.

This game is the first in a brutal stretch for the Birds, and as I wrote earlier in the week, it could be Halloween before they pick up their second win of the season. Maybe they'll pull off an upset in this stretch — perhaps on the road against the surprisingly 3-0 Panthers or Raiders — but we don't think it's going to happen this weekend. The Chiefs really need a win; they're not overlooking the Eagles. And that's bad news for Nick Sirianni's team.

Believe it or not, the Chiefs and Eagles are both coming into this Sunday’s game desperate for a win. Kansas City finds themselves at the bottom of a division with two undefeated teams with a loss to a divisional opponent already in the books, and the Eagles have only been saved bottom feeder status thanks to the horrific New York Giants.

I’m going to keep it simple here — the Chiefs are way more talented and are going to win as a result. No need to overthink it.

Let the beatings begin! The Eagles couldn't be getting the Chiefs at a worse time. Kansas City is 1-2 and in the throes of a two-game losing skid. Voila! Here come the Eagles, who will be there to remedy every thorny issue the Chiefs have had the first month of the season. Missing left tackle Jordan Mailata, losing left guard Isaac Seumalo for the season and dealing with rookie Landon "I can't pass block" Dickerson at right guard, the Chiefs' Chris Jones, Jarran Reed, Derrick Nnadi and Frank Clark should be frothing at the mouth.

How sweet will this be to see former Eagles coach Andy Reid win his 100th game as the Chiefs' head coach at Lincoln Financial Field. By the time the Eagles are in a position to win again, there's a good chance that they'll be 1-6, heading to Detroit on Halloween. Does anyone really see this rebuilding, dysfunctional team beating the Panthers, Bucs or Raiders in the coming weeks? The 76ers' season opener is just three weeks away. The Flyers open their season just over two weeks from now hosting Vancouver. By the end of October, the Eagles may be battling the Flyers for relevance. By then, the Flyers may have more wins.

There's simply too much to go against KC in this game. The Chiefs possibly losing three straight? Andy Reid not winning his 100th game as a Chief here in Philly? Not with how Pat Mahomes should be able to thread this defense. As bad as the Chiefs and our buddy Spags have looked on D, we know how difficult it can be for the Eagles to score. This is more of a "get right" game for KC, as the Chiefs look to get their season back on track. This also might be a good opportunity for the Eagles to score some points, but as we saw in Dallas, they aren't equipped for a shootout. Chiefs win, 34-24.

Not only has the big, bad bully set his sights on the Eagles this week, but he also stubbed his toe twice walking down the hallway en route to the projected beating. Philadelphia doesn't only face a better team on Sunday, it will be facing an angry team intent on cleaning things up quickly.

On paper, everything points to a blowout and if Nick Sirianni sticks to his Dallas sentiment and tries to keep up with the Chiefs' high-powered offense the Eagles are DOA. A perfect game plan executed brilliantly probably keeps you within a score until Patrick Mahomes, Tyreek Hill, Travis Kelce, and Co. wear you down late. Another amateurish one will give Andy Reid his 100th win with Kansas City by three touchdowns.