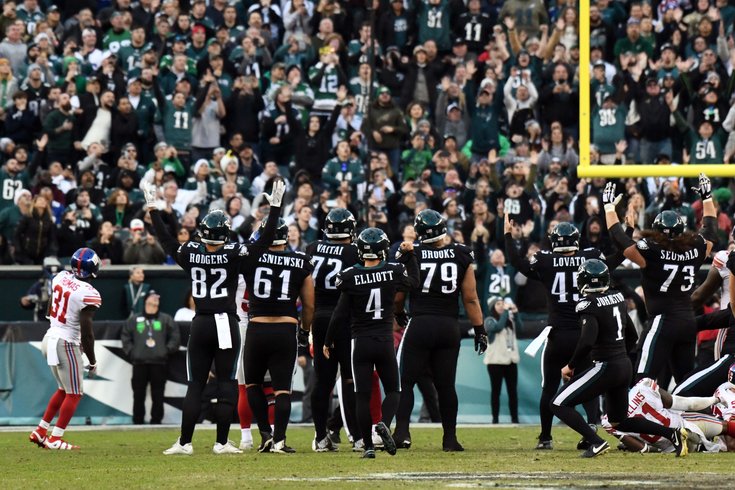 Elliott and Lovato both have fewer than three accrued seasons in the NFL, which made them ERFAs (exclusive rights free agents). We don't have the exact numbers on those signings, but ERFAs are extremely inexpensive. The guess here is that they'll be somewhere around $600K and $700K. Assuming Elliott and Lovato both earn accrued seasons in 2019, they will be RFAs (restricted free agents) in 2020.

Maragos was technically set to become a free agent this offseason when the Eagles were not expected to pick up an option for 2019. He was simply let go a little early to allow him to get a jump on the open market, if he even still has one.

A closer look at each player:

In his rookie season with the Eagles in 2017, Elliott made 26 of 31 field goals, including a 61-yarder to beat the Giants at the end of regulation in Week 3. It was something of an oddball season as a kicker, as he was money on the long kicks, but was shaky on the short ones. In 2018, Elliott was once again 26 of 31, but his misses were more normal, as they were generally of the long kick variety. A look at his first two seasons in the league:

In both of his seasons in the NFL (and therefore also for his career so far), Elliott is hitting field goals at an 83.9 percent clip. That was good for 21st in the NFL among kickers with at least 15 attempts in 2018 (it was good for 17th in 2017), in a league where kickers are far more precise than they used to be. In other words, he's close to the league average in that department.

Elliott is also roughly at the league average on missed PATs, of which he had two in 2018. There were 64 missed PATs in the NFL this season, which averages out to two per team.

Where Elliott has stood out in his Eagles' career so far, however, is that he has ice water in his veins in clutch situations. In 2017 alone, he did the following:

• He made the aforementioned game-winning 61-yard field goal against the Giants.

In 2018, Elliott made some big kicks at home against the Texans, Giants, and Cowboys, but none that will be remembered 10 years from now. He did have a first-quarter miss against the Panthers that faded to the right in heavy winds in a game where the Eagles could have used those points.

On kickoffs, Elliott can reliably it through the back of the end zone when asked, and is also good at hitting popups that land just shy of the goal line, if the Eagles are attempting to pin their opponent deep inside the 25.

Elliott just turned 24 last week. and it's reasonable to expect that he'll only get better.

Back in the day, I used to watch every long snap of the season. For real, I had serious problems. I don't do that anymore, and as such, I can't speak intelligently on the accuracy or speed of Lovato's snaps, so let's just go the lazy route here and just say that he didn't have any egregious mistakes that I can recall last season. Good? Good.

Maragos was a team captain, who was at one time one of the best special teams players in the NFL. He was also a well-respected player in the Eagles' locker room, and a favorite of the coaching staff. He suffered a serious injury against the Panthers in 2017, had surgery, and then required a second surgery near the end of the 2018 season.

Maragos' (little-known) greatest strength was his speed, as he was one of the fastest players on the team. With his speed unlikely to fully return after two knee surgeries, his career may be over.