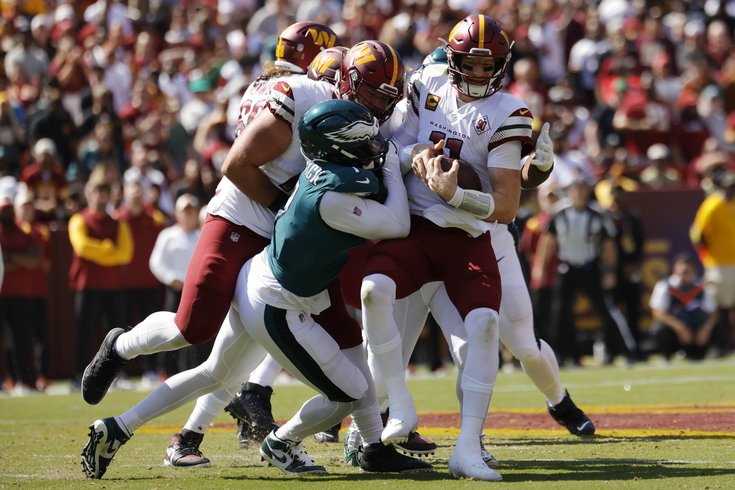 LANDOVER, MD. — The hugging started pre-game for Carson Wentz on Sunday and that probably seemed pretty cool for the ex-face of the franchise in Philadelphia.

It started with Jordan Mailata embracing the former Eagles quarterback near midfield and from there, everyone from the guy who dealt Wentz to Indianapolis, general manager Howie Roseman, to his good friends Fletcher Cox and Jason Kelce, as well as star tight end Dallas Goedert were very happy to see the veteran signal caller.

The problematic part for Wentz came after kickoff when Jonathan Gannon unleashed his defense which "hugged" Wentz nine more times during a 24-8 drubbing at FedExField.

The highlight for Washington offensive coordinator Scott Turner’s scheme probably came on the first offensive play of the game, a nifty end around to Curtis Samuel that had the Eagles out of sports and gained 15 yards.

After an incomplete pass to first-round pick Jahan Dotson and a five-yard hookup with Samuel, the Commanders faced their first third-down opportunity of the game when Fletcher Cox and Josh Sweat met at the QB.

That talking about football came through the action on the field for Cox and his fellow defensive linemen, who were responsible for eight of the nine sacks, most on four-man pressures with no blitz help.

“We just played our violent style of defense,” said Cox, who was credited with 1.5 sacks and was responsible for setting the tone by being involved in the first two takedowns.

"Loved it,” said edge rusher Haason Reddick, the $15 million man who was brought in to get after opposing quarterbacks and finally registered his first 1.5 sacks as an Eagle in Week 3. “Fletch, he’s one of the great leaders on this team, one of the great Eagles, and he’s still doing it at a high level.”

Cox isn’t the dominant player he once was but the 31-year-old is still impactful and seems to have some extra juice in his legs this season.

Fellow veteran Brandon Graham, 34, found the fountain of youth in the form of the explosion that produced 2.5 sacks and a strip sack that wasn’t quite what BG did in Minneapolis during Super Bowl LII, but it did give the Eagles’ offense a short field which resulted in a 23-yard TD to Goedert on a tight end screen in the second quarter.

“First half, we were hitting [Wentz] and that’s the No. 1 thing as a d-lineman,” Graham said. “You just want to hit [the QB] and we were getting sacks, too. Those hits add up.”

Add up they did.

The Eagles understand better than most what Wentz’s shortcomings are when it comes to playing the position and while hitting any QB early is going to be conducive to solid defensive play, that does get amped up even further with the Washington starter.

Wentz typically doesn’t speed up when he’s getting pressured, but does lose accuracy and has always had trouble with ball security.

All those little mistakes were revealed Sunday as Javon Hargrave and linebacker T.J. Edwards joined Cox, Sweat, Reddick and Graham in getting to Wentz. Philadelphia also recorded 17 hurries, led by Graham’s five with Patrick Johnson also contributing there.

The game was won in the first half with the final 30 minutes serving as extended garbage time where Wentz was able to put up some hollow numbers.

Things were secured, however, by a 24-0 first half when the defense produced six of the nine sacks with two forced fumbles while allowing just 50 total yards.

It was so dominant that Nick Sirianni, an offensive head coach, had to be asked about his defense first.

“We thought [the defensive line] could get after them a little bit, and they did,” said Sirianni. “That’s the strength of our team. That's what you want, a division game, and you want the strength of your team to play like they did right there.”