Carson Wentz: It was a 'surreal' feeling before going up against the Eagles 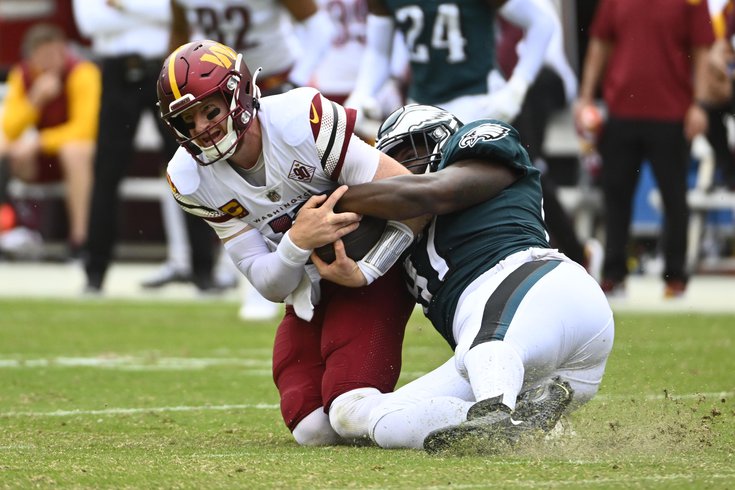 LANDOVER, MD. — It's a situation that would've been unfathomable for an Eagles fan just a couple of years ago: Carson Wentz gone and playing for a divisional rival. The disastrous 4-11-1 2020 season for the Eagles led to the organization trading away their franchise quarterback, a guy who was presumed to have the team in playoff contention for the next dozen years.

Wentz's 2020 collapse feels more like 10 years ago than two years ago with the way the Eagles have reshaped themselves in the post-Wentz era. Things have changed in a hot second with Wentz's former backup quarterback, once again, becoming the toast of Philadelphia while Wentz now suits up for his third team in as many seasons.

Wentz faced his old squad for the first time on Sunday. If Wentz was hoping for revenge, he certainly didn't find it, as the Eagles thoroughly outplayed Carson's Commanders 24-8 in a win that wasn't as close as that score would indicate. Eagles fans who gathered at FedEx Field for the Week 3 matchup had mixed emotions about seeing the Eagles play Wentz and those feelings carried over to the quarterback himself.

"It was kind of surreal pregame seeing all those guys," Wentz said after the game. "At the coin toss, seeing [Brandon Graham], Fletcher [Cox] and Jason Kelce. I was right next to [Kelce] for years there, so there are some surreal moments for sure, especially before the game, but once the kickoff starts, it was a football game."

Wentz got reacquainted with Graham and Cox in a hurry after that. The duo combined for four sacks on Wentz as part of a totally dominant defensive outing. Wentz was sacked a total of nine times while fumbling twice, a performance that felt more akin to Wentz's 2020 self than the 2017 one who was about to walk to an MVP award.

Regarding the sacks, Wentz said, "It's not the o-line. I've got to do better. I've got to get rid of the ball in a lot of those situations.

"Their d-line, their front, it's a good front, but I got to be better and help our guys out."

Wentz is human. There's a human factor in everything in the sports world. The Week 3 matchup was highly anticipated given both the high highs and low lows Wentz experienced in Philly. The quarterback, however, said that the team across the sideline and the Philadelphia fan presence wasn't a factor in his play.

"I don't think so," Wentz said about if the elephant (eagle?) in the room affected his game. "I think they got our number today. I don't think the performance was affected by that.

"I know Eagles fans travel well. They showed up and they had a lot to cheer for."

"I don't think so," Rivera said if the totality of it all affected Wentz's performance. "I think they did some things that we should've been able to counter and handle and we didn't."

Wentz owned up to his poor play. That's a level of accountability that may have been missing during his Philly days. The quarterback had big-time stats the first two weeks of the season, throwing for 650 yards and seven touchdowns, but these are the type of games Washington thought would be in the rearview mirror when they traded for him this offseason.

When asked if days like this make Rivera consider a switch at quarterback, the head coach flatly stated, "No."

Commanders QB2 Taylor Heinicke is no Jalen Hurts, but the calls for a new signal-caller will grow if Wentz racks up more games like this, just as it did for him in his last season in midnight green.