The Eagles' pass rush was ferocious against Carson Wentz 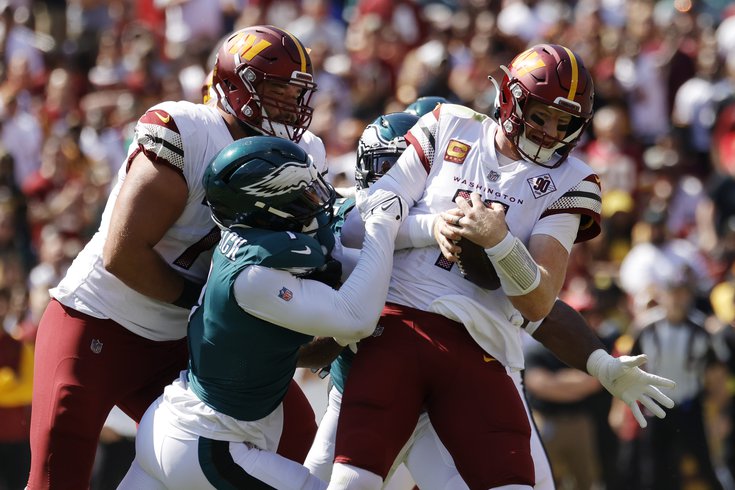 This won't happen on Monday night because Carson Wentz is hurt, though Haason Reddick and the Eagles' defense will probably be more than happy to go tackle Taylor Heinicke instead.

It was an underwhelming 2021 season for an Eagles defensive line that featured big names and big contracts. They had the second-fewest sacks in the NFL with just 29. The heat was on defensive coordinator Jonathan Gannon heading into 2022, especially with the addition of Haason Reddick in free agency and Jordan Davis in this year's NFL Draft.

The early returns were subpar.

A pass rush that should feast looked famished in Week 1 against the Lions in Detroit. While the Lions may be friskier than the rest of the league imagined, more pressure was on Gannon in Philadelphia than pressure his defense was generating.

In a Week 2 Monday Night Football outing, the switch flipped, as the Eagles had Kirk Cousins off his game all night in their win over the Vikings. In a Week 3 road win over the Commanders, the d-line's play was everything an Eagles fan could've wanted.

In the first quarter alone, Carson Wentz, the former Eagles franchise quarterback, was sacked four times. Washington's offensive line played as if it was a "shells and shorts" practice and Wentz's pocket presence would give him an awareness rating of roughly 23 in "Madden."

The game really broke loose in the Eagles' favor after their fifth sack of the afternoon, one in which Brandon Graham striped his old teammate, giving the Eagles ball in ideal position to score their first touchdown of the game:

The Eagles finished with nine on the game. Take a look at what the Eagles' huge advantage in the trenches produced:

If a team has Reddick, Davis, Graham Josh Sweat, Fletcher Cox, and Javon Hargrave getting after the quarterback, outings like this should be closer to the norm rather than an out-of-the-ordinary turn of events.

Yes, Wentz's prevalent issues from Philadelphia were apparent: he held onto the ball for too long and when he did let it go, it was usually fumbled onto the grass. His inability to fully grasp what happens when a defensive end gets bend on the edge must be infuriating for Commanders fans as it was for Eagles fans' during his downfall season in 2020 in Philly. It was a serious of "What is he doing?" blunders.

When Commanders had the faintest bit of offensive life in the fourth quarter, Wentz continued to crumble with sack after sack. Taking a sack on 4th and 22 when trailing 24-2? Not ideal!

Brandon Graham with 2.5 sacks for the first time in 3 season

That's all true, but credit where credit is due with this defense after a disappointing 2021 campaign and a concerning Week 1. The Eagles' high-powered offense with Jalen Hurts, A.J. Brown and DeVonta Smith is deservedly grabbing everyone's attention, but Gannon has quickly reshaped this defense into something just as potent.