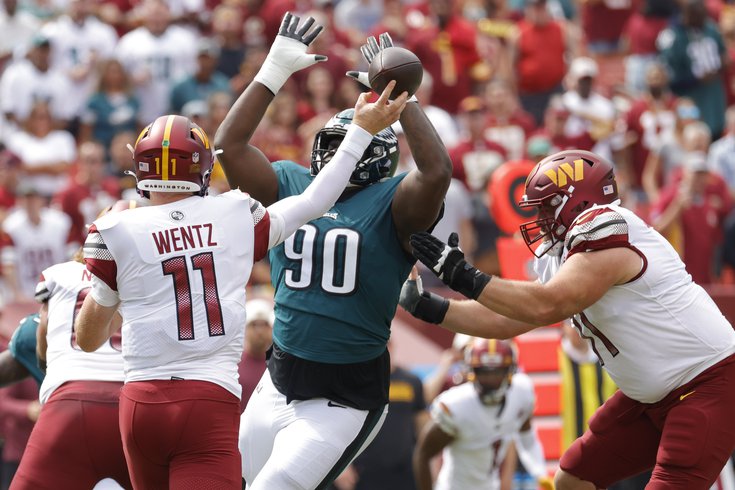 The Eagles slowed down considerably in the second half but still beat the Commanders comfortably, cruising to a 24-8 victory over former Philadelphia QB Carson Wentz.

• There were plenty of people out for blood when the defense surrendered a ton of points to the Lions in Week 1, this writer included, with Jonathan Gannon perhaps the most unpopular man in Philadelphia for exactly eight days. Maybe we should have focused less on their second half letdown against Detroit and more on how they looked in the first half of that game, because it's been more indicative of their play in the games since.

Pinpointing one group or one player in particular sort of misses what has made this group great over the last couple of weeks. Their prep work has clearly been top-notch, as the Eagles have been breaking on throws and batting down passes at what feels like an elite rate. TJ Edwards has been tremendous in his role at the linebacker spot, around the ball at seemingly all times and making the Eagles a surer group of tacklers by simply being on the field. And Sunday's game against Washington was a coming out party for the defensive line, who beat up Carson Wentz early and completely took him out of the game until it was essentially out of reach in the second half.

The hit parade just did not stop in this one. With the Eagles far out in front to open the fourth quarter and clearly taking their foot off of the gas a little bit, the Commanders looked to be close to putting their first touchdown of the day on the board. It was the perfect time, as it turns out, for Brandon Graham to grab hold of Carson Wentz's ankles and earn Philadelphia's seventh sack of the game, 2.5 of those personally credited to Graham.

Before you could stop celebrating that play, Josh Sweat managed to get around the edge for sack No. 8 just two plays later, ending another Commanders drive and leaving them stuck on a hilarious two-point total.

The Eagles' defenses in recent years have always felt somewhat imbalanced, maybe because the peak of the Andy Reid/Jim Johnson era featured playmakers nearly everywhere on the field. It's very early to compare this group to any great Eagles defenses of the past, and it will take a while for us to figure out exactly how good this group is because of the soft schedule ahead. But the foundation is strong enough to hope they might be able to reach special territory this year. Their top corners have been as good as it gets, and the big-name guys on the line are finally rolling after a hellacious effort against Washington. They're minimizing big plays, keeping scoring down, and providing fuel for dreams of playoff glory.

• This game shows some of why Carson Wentz ended up on the outs with the Philadelphia fanbase and why Jalen Hurts has been afforded some patience as he matures behind center. One guy looks exactly as he did when he left town a couple of years ago, while the other continues to progress and show signs of growth for a 3-0 football team.

One of the best things we can say about the Eagles' offense through three weeks and three wins is that it has been an equal opportunity attack, Hurts spreading the ball around depending on what the moment calls for. It has allowed them to attack soft coverage, favorable matchups, and make sure everybody stays connected as these games wear on. But you do ultimately have to find ways to get the football to your top playmakers, and Hurts has not been shy about feeding DeVonta Smith and AJ Brown through the first three weeks of the season.

Smith started the season as slow as a wideout could, skunked in Week 1 as Brown rolled to one of the best debuts in franchise history. All Smith has done since is take the lead at the receiver position, giving the Eagles something they have not had at any point in recent memory: two No. 1 talents at wideout.

We've grown accustomed to Smith dominating on underneath patterns and killing opposing defensive backs with precision, footwork, and route running, but this was a reminder of the highlight reel he put up en route to winning a Heisman Trophy at Alabama. There was a seemingly endless series of deep shots from Hurts to Smith in this one, the quarterback ultimately trusting his guy to win every one-on-one battle (and the occasional two-on-one battle) with the Commanders. Hurts' confidence was frequently rewarded, Smith turning in spectacular play after spectacular play when called into action.

It's worth mentioning, mind you, that Smith's big day against the Commanders did not necessitate Brown having a down day opposite the second-year stud. Far from it — Brown muscled through a Commanders defender for a touchdown in the first half, and ultimately came up with a number of big plays throughout the day, extending drives with some clutch catches over the middle. When one of those two isn't rolling, well, you still have a burner like Quez Watkins or an athletic tight end like Dallas Goedert or a multi-purpose back like Miles Sanders...well, you get the point. This team is pretty loaded, and they're making good use of what they've got.

What should scare other teams is that Philadelphia still left at least a couple of big plays on the table. Hurts had misses — near-misses but misses all the same — on deep shots to Brown and Smith in the second half, each of which could have potentially gone for touchdowns if the placement was a bit better. Truthfully, though, Brown still had a chance to make a play on the ball with slightly better tracking, and ultimately you just feel heartened that so many of these plays are there to be had.

Meanwhile, Wentz still has the deer in the headlights look in the pocket that drove people crazy during his time here, as unsure of what's around him as he was when he left Philadelphia. There will be (and arguably should be) plenty of excuses made as a result of poor pass protection in front of him, but Wentz consistently compounds problems and waltzes into sacks that should be avoided by a veteran QB. It's a blessing to not have to watch that anymore, and though there's a lot of time left before we know what Hurts' ultimate fate in the NFL looks like, he and the Eagles offense appear to be marching toward a pretty special season.

• No real notes otherwise. The Eagles are 3-0 and have looked pretty damn good in the process of getting there. I do want to see what they look like against a high-level QB, but Kyler Murray is probably the most talented QB they'll face until around Thanksgiving, when they'll host Aaron Rodgers and the Packers. That's pretty staggering, and they need to continue piling up wins to set themselves up for a deep playoff run.

• Giving Boston Scott the ball backed up against your own goalline is certainly a choice. Not that Dallas Goedert's horrible blocking did him any favors.

• Second-half swoons have been common for the Eagles this year, and while it can be difficult juggling clock killing and good, legitimate offense when you're up by a lot, they ultimately need to find the balance.

• Dumb penalty from Jordan Davis on Washington's field goal that turned into a first down in the third quarter. I'm sure the rookie will get an earful about that in the film room this week.

• I don't think the Eagles have their punter or punt returner if they really want to go on a run this year. Special teams can be a marginal concern for a lot of the season, but they are difference makers in games with thin margins in January. Something to keep an eye on.

• Just going to dunk on this stupid tweet real quick:

I remember when everyone in Philly was on Wentz’s top when he was healthy, in the Mvp race, and winning games.
Some of y’all timelines don’t reflect that same energy lol

"I remember when sports fans were happy when a guy played well, and now they're mocking him while he's playing bad for a division rival." Brilliant observation from the guy who didn't understand the concept of a livestream.