Three pivotal plays in the Eagles' win over the Commanders 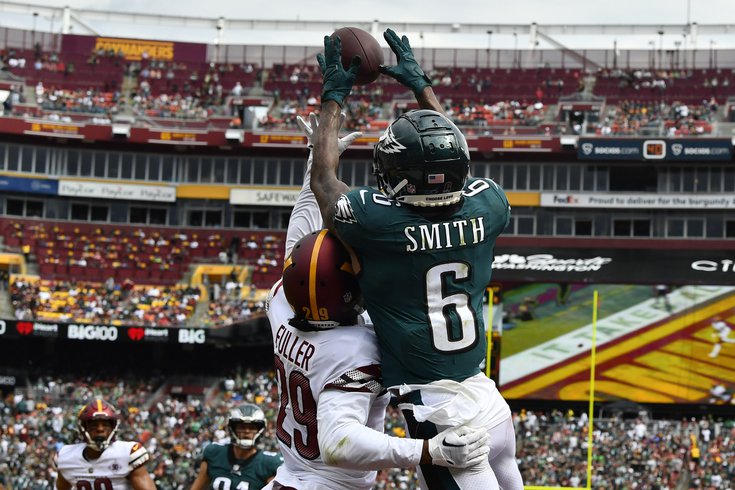 LANDOVER, MD. — It was a Philly takeover in the Eagles' road win over the Commanders. Not only did tens of thousands of Birds fans make the trip down I-95 for the game, but the Eagles themselves dominated on both sides of the ball in their commanding (pun intended!) 24-8 Week 3 win. It wasn't as close as that score even seems.

Hype continues to build for a deep playoff (Super Bowl?) run and with performances like this, it's pretty easy to see why. As I do after every Eagles game, here are the three pivotal plays of the afternoon that turned the tide in the Eagles' favor:

To say Carson Wentz's first game against hid old team was rough would be a colossal understatement. Washington's offensive line gave him absolutely no help, but the issues that led to Wentz's downfall in Philadelphia were omnipresent at FedEx Field. His feel for the pass rush was non-existent. He held onto the ball for far too long and acted as if throwing the ball away would result in a 45-yard penalty.

The Eagles' pass rush was ferocious, sacking Wentz nine times down in Landover. The biggest was a strip sack from his former teammate Brandon Graham that eventually set up the Eagles' first touchdown of the game:

Wentz assuredly had revenge on his mind on Sunday, but everything that could've gone wrong for the Birds' former franchise QB did. The large contingent of Eagles fans at the game had a mix of positive and negative feelings on No. 11, but Wentz's whole day was nothing short of a disaster for a guy who's trying to resurrect his career.

The Birds had a double-digit lead at this point in were in complete control of the game, but they were truly leaving points on the board. Facing a third down and the prospects of only being up two scores, Hurts made a huge play on third down, as he's done continuously during this young season. Hurts dropped back, A.J. Brown ran a perfect route and made the strongest move possible on the ball to bully his way into the end zone:

This is the type of guy you trade a first round pick for and hand a contract worth up to $100 million to. Hurts has unquestionably made a leap this year as a pure passer, but the acquisition of Brown is a huge part of it. The Eagles have given Hurts the perfect nucleus to excel and he's holding up his end of the bargain.

One of the Eagles many "Batmen" is getting it done:

The Eagles had been moving the ball down the field consistently in the first half, but struggled to punch the ball in for touchdowns in the red zone as much as they should've. Again, points were left on the board. It nearly looked like another missed chance after Hurts unsuccessfully tried to run the ball in on third down when the Eagles had no timeouts remaining. In a frenzy, the Eagles' players scrambled to the line of scrimmage and were able to get off one final snap of the half.

Hurts dropped back, looked to the back corner of the end zone and threw up a jump ball to DeVonta Smith. In a day full of jaw-dropping Smith catches, this was the most important of them all:

The worries about Smith not being involved in the offense enough after a zero-catch outing in Week 1 sure went with the swiftness, didn't they? This is exactly why the Eagles moved up in the 2021 NFL Draft for Smith, poetically using one of the picks they acquired from the Colts in that offseason's Wentz trade to do so.

On the docket next week? Another old friend: Jaguars head coach Doug Pederson.