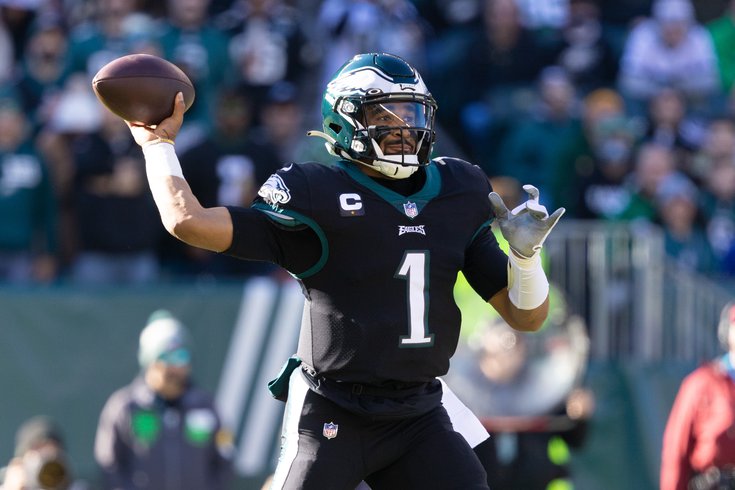 ESPN has created an NFL power ranking evaluating teams over the next three seasons. This isn't a ranking for 2022 alone, but projecting which teams are in the best position for consistent success in the years to come. The Eagles came in ranked 15th among all NFL teams. Taking into consideration input from analysts Field Yates, Jeremy Fowler, Louis Riddick and Seth Walder, ESPN graded teams on the following criteria:

The Birds' overall grade was 80.5. Here's how the Eagles were graded out in each category:

Their rationale is as follows...

Why they're here: I'm not sure another player impacts how far his team can go this season more than quarterback Jalen Hurts. If Hurts cements his spot as the long-term answer at quarterback, this ranking will look way too low. This roster is really good, head coach Nick Sirianni assimilated into his role right away last year, and GM Howie Roseman is an exceptionally resourceful roster-builder. -- Yates

Biggest worry: Assuming management has the person it wants running the show in Sirianni, the big question/concern is whether the Eagles have the QB who can take advantage of what seems to be a well-constructed offense and a defense that should be much better on all three levels. Following veteran additions and savvy drafting, it now falls on Hurts to shine. Because if he doesn't, Philadelphia has the draft capital to go get someone else in 2023. -- Riddick

What could change for the better: As Field and Louis pointed out, the Eagles have to decide whether Hurts and Sirianni can thrive long term. For all the positives with Hurts -- intangibles, toughness and consistent improvement -- one question looms: Can he drive the ball downfield consistently enough for Sirianni to run the offense he wants? In flashes, the answer is yes. But in the playoff game vs. Tampa Bay, the answer was a resounding no. Figuring that out over the next 17 games will help Philly chart its QB path. On defense, the Eagles could use safety help, too. Is there perhaps another move coming from Roseman? -- Fowler

Stat to know: The Eagles ranked in the top five in pass block win rate (67%), run block win rate (74%) and pass rush win rate (49%) last season. And they added edge rusher Haason Reddick in free agency, too. Philadelphia is a force in the trenches. -- Walder  [ESPN+]

It's a pretty fair ranking for the Birds.

The question mark at quarterback with Jalen Hurts halts what's otherwise one of the best rosters in the NFL with way more young talent budding than what could've been imagined just a few years back. This certainly isn't to say that Hurts can't have success this year. I believe he will, but a quarterback is the most integral part of any longterm evaluation. Hurts could do well enough in 2022 to have the Eagles win the division, but that doesn't necessarily absolve all the worries about his game when projecting through 2025. You know Joe Burrow is going to be good then. You know Justin Herbert is going to be elite. You know Josh Allen is going to keep on his torrid pace. If Hurts looks great this fall, I'd imagine it's an easy jump into the top eight or so for the Birds come next summer.

I did think it was a tad odd that the Eagles were highlighted on the front page of ESPN for this feature as if they were some clear-cut top-10 organization only to come out around league average:

"The Eagles are on the rise."

"We also have them league average in our future power rankings."

The Eagles did come in 30th in last year's version of these rankings, so a sizable jump for sure back to respectability, but it seemed weird. I guess ESPN know Birds fans love to get angry over the national media's opinion of the team. 🤷