What they're saying: The Eagles should trade for safety Jessie Bates 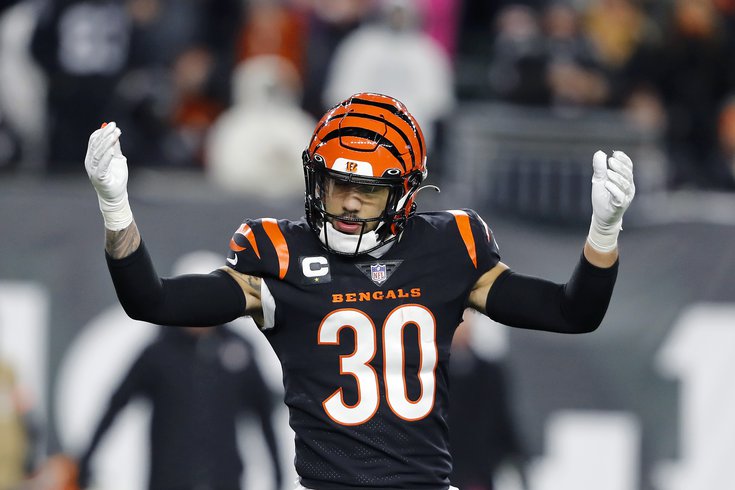 Bengals safety Jessie Bates feels like the new white whale for Eagles fans. The 25-year-old former Second-Team All-Pro choice's name has continuously popped in trade rumors this offseason. Cincinnati placed the franchise tag on Bates and the deadline has passed for franchised players to sign a longterm extension this year. Bates doesn't appear to have any intentions of playing on the tag in 2022, leaving other fan bases to run wild with trade ideas (can we get a trade machine going for the NFL?).

The Eagles have been linked to Bates given the team's glaring hole at safety and Howie Roseman's propensity for swinging big trades and handing out pricy contracts. Look no further than the Birds' trade for A.J. Brown back in April for a blueprint for this type of trade in Philly.

Would the Eagles actually make a move for Bates? I wouldn't put it past Roseman. The national media tends to agree. Here's what they're saying about the Birds and Bates as training camp inches closer:

The Draft Network lists the Eagles as one of the three teams who should try to trade for Bates. Their reasoning:

Philadelphia Eagles General Manager Howie Roseman has been one of the most aggressive decision-makers across the league this offseason. Roseman completed a stunning draft-day trade with the Tennessee Titans for superstar wide receiver A.J. Brown. Roseman has also invested considerable resources into this defense, particularly in the secondary.

Roseman immediately pounced on the new-found availability of cornerback James Bradberry, who was released from his contract by the Eagles’ division rivals, the New York Giants. Bradberry ultimately signed a one-year contract with the Eagles worth roughly $7.2 million. Roseman continued to retool Philadelphia’s secondary by signing veteran safety Jaquiski Tartt.

Tartt’s contract is barely worth $1 million, however, and his presence would likely do little to deter Roseman from exploring a trade for Bates should his services become available. The Eagles are clearly in win-now mode. Bates’ arrival would increase their chances of postseason success. [TDN]

Similar to the above story, CBS Sports has the Eagles as one of eight teams who could be in on Bates, having them No. 1 on the list. Their reasoning:

If there's one team that's made a big move at pretty much every position of need this offseason, it's the Eagles, who addressed holes at receiver (A.J. Brown), defensive tackle (Jordan Davis), pass rusher (Haason Reddick), linebacker (Kyzir White) and cornerback (James Bradberry). The last one left is safety, where Jaquiski Tartt has come aboard as camp competition but Anthony Harris and Marcus Epps are serving as placeholder starters. Trade-happy GM Howie Roseman has admittedly struggled to identify long-term answers at safety via the draft, and he practices and preaches the importance of patient roster-building. So Bates, who played on a Bengals team that employed current Eagles assistant head coach Jemal Singleton, represents the ideal solution for a quiet NFC East contender. [CBS]

Not So Fast, My Friend ❌

Former Eagles beat writer Mike Kaye throws a bit of water on the fanfare surrounding Bates speculation. Kaye writes that there's difficulty for pulling off such a trade and teams may not want to part with picks and players for a dude who's locked into just a one-year deal in 2022:

Bates is a top-tier safety and is worth top-tier compensation. But, with a one-year deal stuck in stone, his trade outlook isn’t really easy to figure out.

Typically, teams want to sign a player to an extension when they trade a premium asset for them. Due to the passed deadline, that function isn’t attainable with Bates. So, a team is essentially trading an asset for a player who could be one and done. Sure, the acquiring team could use the franchise tag as protection next year, but that’s not an ideal situation — from a cap or relationship perspective. [PFN]

How do I feel about Bates? Given Roseman's drive to get deals done, it's hard to imagine the Eagles letting Bates walk next offseason if they were to part with significant draft capital for him. While I believe the Eagles have a ceiling of a 12-or-so-win team, it's not as if they're a single piece away from being put over the top and being top-tier Super Bowl contenders. The organization seems to be hoarding future draft picks in case they want to go after a quarterback next offseason too, whether that's for a veteran or a player in the draft.

I saw a mock trade on Twitter earlier in the week that was Landon Dickerson and a second-round pick for Bates. Yeah, a big ol' no from me on that one. Don't trade key guys and leave holes elsewhere just to get this dude! Yes, teams need to give up good players to get other good ones, sure, but it's near-impossible to have zero holes anywhere on your roster. It's the nature of team-building in the salary cap era. I'd lean towards assuming that Bates won't be wearing midnight green this fall, but, hey, you can never fully count out Howie.