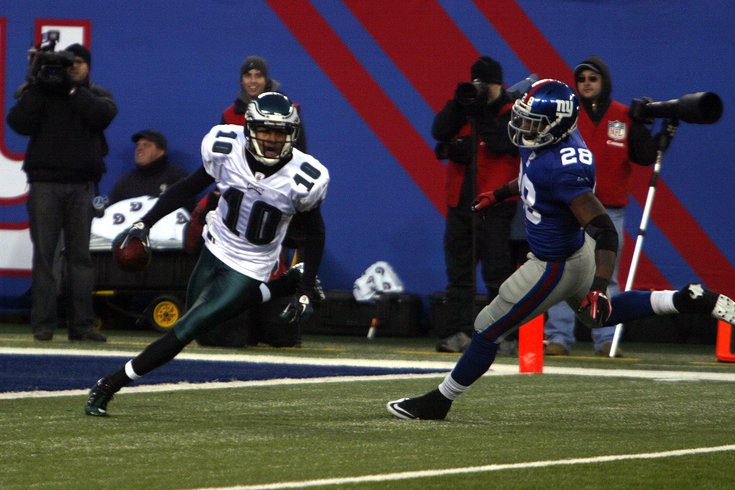 A return for the ages...

With time ticking until the Eagles begin training camp, midweek next week, our sports staff had one last chance to randomly rank a position of players.

After knocking off the QBs, the RBs, the WRs, the DBs and the pass rushers, we thought it might be fun to rank something off the beaten path. If your team had one kickoff or punt to return at the end of a game, which Eagles return man would you want lining up in the defensive backfield?

We combed through the stats and history of the franchise and came up with 38 players — spanning every position from fullback to wideout to cornerback — who have had at least 50 official returns as a member of the Eagles. We then ranked them and averaged out the rankings amongst our staff to create the order of the rankings below.

Shamus Clancy: DeSean Jackson is the man behind the greatest regular season play in Eagles history (NFL history?). Jackson is the most electric player to ever suit up for the Birds and his skill in the open field was such a breath of fresh air for an Eagles team starved for big-play ability at the end of the Donovan McNabb era. "I don't care if he jumps, dives, he's running around and he's in the end zone and there's no time and the Eagles win. THE EAGLES WIN!"

Nick Tricome: Mitchell got to the Eagles late in his career, but still had plenty left in the tank. His 1,369 yards on punt returns are still the most in team history and his 3,311 on kickoff returns are second only to Timmy Brown (further down the list). He brought his return specialty to the Eagles just as they were  getting good, giving the other teams one more thing to worry about, especially the Atlanta Falcons.

Evan Macy: I saw Nick had Sproles listed first on his list (I had him fourth on mine) and the more I thought about it and researched him for this post, the more I realized he might be deserving. Though he didn't have the Miracle at the Meadowlands on his resume, it was quite nice for the Eagles to have an automatic, no brainer effective return man for all those years they did. The current team certainly misses having that continuity.

Shamus: Timmy Brown might have the best pure stats of an Eagles returner ever. He certainly didn't play in an era where his TDs were cut up and ready for YouTube highlights, but taking 105-yard kick return back to the house is something special.

Evan: Westbrook was kind of an under the radar effective return man — mostly punts — for the Eagles and was used in high leverage spots sort of like DeSean Jackson was years later. He brought two to the house and his 12.8 yards per punt return is the third best all time (of qualifying returners).

Nick: Witherspoon was only around for a short bit, but he found a role as a return specialist. And if he saw a hole, it was off to the races.

Shamus: I couldn't find a video of Wally Henry's 1978 punt return touchdown for a 9-7 Eagles team that made the postseason for the first time in 18 years. That's a shame. "Wally" is an elite 1970s football name.

Shamus: Allen Rossum went on to greater heights with the Falcons, where he was a Pro Bowl returner in 2004, but he started his career in Philly. He was a bolt of lighting during his lone return touchdown with the Eagles. The Birds' special teams coordinator back then? John Harbaugh!

• Evan: Jerry Norton was an Eagle in the 50s and played running back, cornerback, punter and return man. In 1958 he wanted more money and the owners wouldn't pay him so he was traded to the Cardinals. Two years later the Eagles won the NFL championship. Why am I musing about him? Because old-timey-two way players are awesome.

• Shamus: Reno Mahe, coincidentally, is related to Sikahema. Though he didn't match Vai as a returner, he was still relatively productive. During his time in midnight green, Mahe had a part-time job at Chickie's and Pete's at one point, much like everyone from South Philly.

• Evan: Johnson's TD was great, on national TV against the Cowboys. He plays Canadian football now.

• Shamus: I was all in on Kenjon Barner during Chip Kelly's Oregon fetish era.

• Evan: Bibbles is another old timer who deserves a fun look. He was the MVP of the Refrigerator Bowl in 1949 and a rugby player who made the team after a try-out and left for a few years to serve in Korea. He would later go play rugby in Canada where he was tripped by a spectator en route to the title in 1957. Awesome.

• Shamus: Just the names "Dexter Wynn" and "Roderick Hood" give me flashbacks to my dad yelling at the TV that the Eagles wasted roster spots not having good returners at that point in the Andy Reid era.