John McMullen: No motion, no problem for the Eagles? That's their mentality 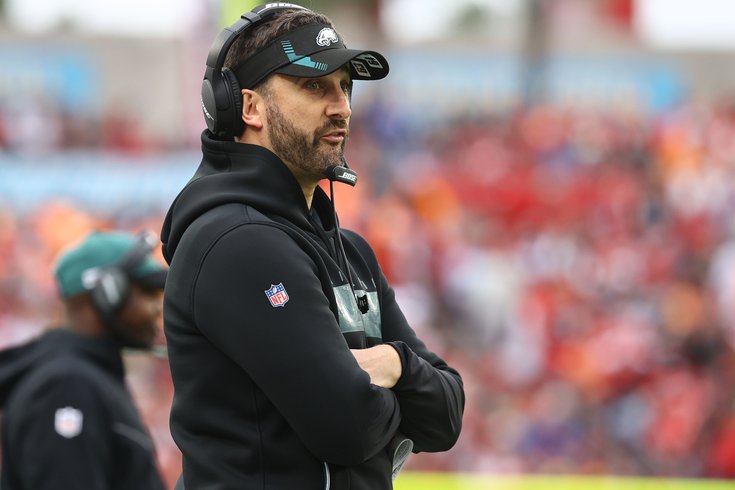 As the Eagles prepare to enter the 2022 season with play-caller Shane Steichen, it’s worth rewinding to the aftermath of Doug Pederson’s three-year fall from Super Bowl hero to stale offensive mind in the eyes of many Philadelphia fans.

Creativity is a common buzzword you’ll hear from critics of NFL play-callers with no real explanation behind the nebulous thought.

To the casual fan, being creative usually means a lot of "eyewash," as former Eagles defensive coordinator Jim Schwartz liked to call the motion certain teams used to try to put stress on the opposition with bells and whistles.

The best example of that is Sean McVay, who likes to refer to his offense as the “illusion of complexity,” easy for the Super Bowl champion Los Angeles Rams to understand and execute with sleight of hand tricks built in to confuse the defense.

McVay is considered by most observers to be one of the most “creative” minds in football despite basically admitting his offense isn’t all the complex inside his own walls. Schwartz himself called McVay the OG of eyewash despite the fact that McVay is still only 36 as he enters his seventh season as the head coach of the Rams.

Back in September of 2020, the Rams blitzed the Eagles 37-19, and veteran safety Rodney McLeod explained the difficulties of dealing with McVay’s David Blaine act.

"It was identical to what we practiced," McLeod said of the L.A. offense. "This was one of those games where you had to play fundamentally sound disciplined ball [and] trust in one another, whether that’s the d-line holding up there standing to us in the backend understanding how they are going to attack us in what areas and where we need to be."

"I feel like we started to chase plays rather than be in the moment and trust in one another consistently," McLeod said.

Fast forward to the current Eagles offense which finished No. 32 in the NFL last season when it came to using motion despite the perception that the young, innovative offensive minds were here to clear up the mess of the old-school guy who woke up one day in a post-Super Bowl fog without his “creativity."

However, in the ugly September 41-21 loss at Dallas early last season the Eagles did not use one offensive play with motion.

“I’m not just not going to motion just to motion because then you’re spending a little more time on the motion and a little less time on everything else,” Nick Sirianni explained. “I just like to get up, get ready, get set and motion when we need it.”

That brings ups to the experts.

The perception is that NFL teams that use a lot of motion – think McVay and former Eagles coach Andy Reid with Kansas City – to gather information pre-snap for their quarterbacks.

That's not at all the case as McVay intimates with his “illusion of complexity” narrative.

“[Information gathering] is not what motion is used for in the NFL,” a former personnel executive said. “Think about it. The veteran quarterbacks get coverage indicators from certain positions and the lesser experienced ones may not be capable of doing it consistently anyway.

“Motion is about creating stress on the defense by testing their discipline and some coaches like to do it consistently with the idea cracks will eventually develop.”

If you remember early last season the Eagles were the most penalized team in football, so many had the thought Sirianni pulled back to simplify things for his young receivers which has some merit, but not in relation to the movement on offense.

Sirianni, once a receiver himself, is a stickler for detail when it comes to route-running, and too often his young wideouts – even DeVonta Smith – were not hitting their landmarks.

Don’t expect much to change in 2022 when it comes to pre-snap motion and the Eagles.

Motion has never been a big part of the offensive philosophy for the key parts of this offensive staff when it comes to the gameplan (Sirianni, Steichen, passing game coordinator Kevin Patullo and run game coordinator Jeff Stoutland).

“I wouldn’t expect anything major [in regard to changes],” a former Eagles personnel executive said. “It could do for some more in the right places though.”

Smith specifically was especially effective out of motion looks in college at Alabama.

The thought around the league is that you don’t need motion to produce offensively, but you’re behind the curve in utilizing many of the modern skill players if you don’t embrace it at times.

“[Critics] are really evaluating play results, not play-calling and that’s usually about execution and the players performing,” a former NFL coach said.

Performance is the thin line between Sirianni and Steichen turning from young and innovative to inexperienced and overmatched.