Mailbag: Is this the best Philly sports have been in your lifetime? 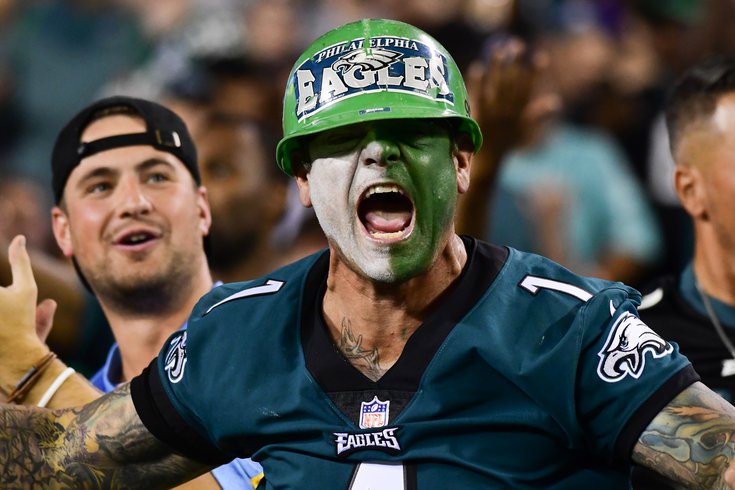 Mail time! The Eagles are soaring at 4-0 as the lone undefeated team in the NFL. Philadelphia is eating it up. I love talking football with Birds fans when the team is playing like they are now. What more could a writer ask for? Given that, I'm going to answer a handful of reader questions. Let's get to 'em...

@showtimesalvato: with the Phils in the playoffs, eagles looking great, sixers (hopefully) primed for success. Is this the best philly sports as a whole has been in your lifetime? (Rank the best years, you know you want to)

These two questions are intertwined, so I'll tackle them together.

• 2001: Sixers reach the NBA Finals, Flyers are third in the Eastern Conference in points (lose in first round) and Eagles reach the NFC Championship Game for the first time in 21 years.

2017-2018 was great for the upstart post-Process Sixers and, of course, the Eagles winning the Super Bowl, but the Flyers and Phillies were lacking then. Right now feels awesome in this city, but a quick Phillies exit this weekend would damper things and just leave Philly with an undefeated Eagles team and a Sixers squad that hasn't gone beyond the second round in 22 years.

I'm going with 2010. With the addition of Roy Halladay and a mid-season trade for Roy Oswalt, Phillies phever was at its peak in Philly. Ryan Howard was still hitting moonshots. Jayson Werth led the league in doubles. Chase Utley was the best second baseman in baseball. With a revitalized Michael Vick, people were truly thinking Super Bowl for the 2010 Eagles. That Flyers Stanley Cup run was such a blast too despite the bitter taste Patrick Kane's series-clinching Game 6 overtime goal still leaves in fans' mouths.

2010 is the last time both the Phils and Birds were good together. What a world.

Looking at the history of Philly teams, 1980 is the clear answer though. All of the Eagles, Flyers, Sixers and Phillies made their respective sport's championship with the Phils winning it all.

@ClassIsBoring: Paint a picture of what the city of Philadelphia would look like if the Eagles had a ten year postseason drought following the Super Bowl win

You know those "utopia" memes? They illustrate how perfect the world or a specific place would be if one little thing went a different way. Here's one I use a lot:

If the Eagles didn't make the playoffs for 10 years, it would be the complete opposite of that. It would look like "Fallout 3" out there. Old SEPTA tokens would've become the default currency in this post-apocalyptic world formerly known as Philadelphia.

Could Eagles fandom in this city ever truly wan? I've been fortunate enough to watch and cover the most successful two-decade run in franchise history. It's an Eagles city, but that's been engrained in an entire generation of Philadelphians because the Eagles have always been in the mix with high expectations even in the years where they failed to reach them.

People loved the Phillies from 2006, Howard's MVP season, to 2011, the end of the Phillies' Golden Age. Loved. I was a kid in grade school and high school, so I can't speak for an older crowd, but Citizens Bank Park felt like the place to be on a summer night. Watching 10 o'clock West Coast games wasn't a chore, it was a badge of honor to wear for being a gigantic fan.

I was at Halladay's playoff no-hitter in 2010 as a junior in high school. Walking out of CBP that night, I would've never believed that the Phillies would be an irrelevant afterthought by the time I was out of college. But they were.

Could the same fate ever befall the Eagles? I say no. The top reason is that parity in NFL is way more prevalent than it is in Major League baseball. It's almost impossible to miss the playoffs for a decade in football. The way the salary cap is structured, the way scheduling works and the way that bad teams can add impact talent in the draft mitigates those long-running lows that populated baseball.

For the sake of a fun hypothetical, if the Eagles did miss the playoffs for a decade, I still think people would be going wild over the Eagles every summer. Do you see how Browns fans act in a given offseason? The hype train would still be there in August and early September.

I like to say that when the Eagles are good, beer tastes colder and food tastes better. The disposition of people walking down the street in Old City or on East Passyunk or wherever you're from is markedly improved. Philly radiates when the Birds are flying high.

But if they were bad? Come those rainy, cold fall days, everything would be worse. The spirit of the Philadelphia would be in the gutter.

For the sake of the city and my coverage of an interesting football team, I hope that never becomes the case.

@_actionjackson5: Do you have any strong opinion on the eagles special teams ?

Jake Elliott? He's a very good kicker who's made a few of the biggest kicks in Eagles history and is coming off his best overall year as a pro.

Arryn Siposs? He's bad. He might not be an NFL-caliber punter. Other teams use their punters as mini-weapons and can play the field position game if their offense is struggling. Not the Eagles. Why no upgrade? Siposs is the holder on the field goal team and the Eagles must like that continuity, but they need more from their punter.

Rick Lovato? You never hear his name, which is exactly what you want out of your long snapper.

Britain Covey as a returner? He's an upgrade over Jalen Reagor on punts, but hasn't displayed any really juice yet and muffed a punt against the Commanders in Week 3. He saw his first kick return action on Sunday, returning three kicks for 69 total yards. I'm not going to make any definitive takes on Covey as a returner just yet. I'd think there's some semblance of upside there.

@LargePetroleum: what position(s) do you think the Eagles could look to add to at the trade deadline and who are some semi-realistic targets?

I want to preface this by saying none of the following ideas are based on inside talk, rumors, etc. It's me throwing stuff at the wall.

My "you wanna get nuts?!" trade idea: The Eagles' own 2023 first-round pick (not the Saints pick) to the Panthers for edge rusher Brian Burns.

Burns is in his age-24 season and has three sacks in Carolina's first four games. He's had nine sacks in each of the last two seasons and is coming off his first Pro Bowl nod. He would be an A.J. Brown-like acquisition: bringing Burns to Philly is both a win now and win later move. His prime is just getting started. Brandon Graham looks spry at 34, but the Eagles need future help at defensive end beyond just 25-year-old Josh Sweat.

A Burns trade would feel analogous to the Von Miller-Rams trade last year. Burns just happens to be nine years younger than Miller.

Josh Allen is electric, but the Eagles rushing Burns and Haason Reddick against him in in an imaginary Super Bowl matchup makes a strength even stronger. Iron sharpens iron, right?

If Howie Roseman really believes in this squad as a Super Bowl contender and wants to get "nuts" even more so than Michael Keaton's Batman, could there be a package deal with Carolina for Burns and a certain All-Pro running back? I would never count anything out when it comes to Roseman.