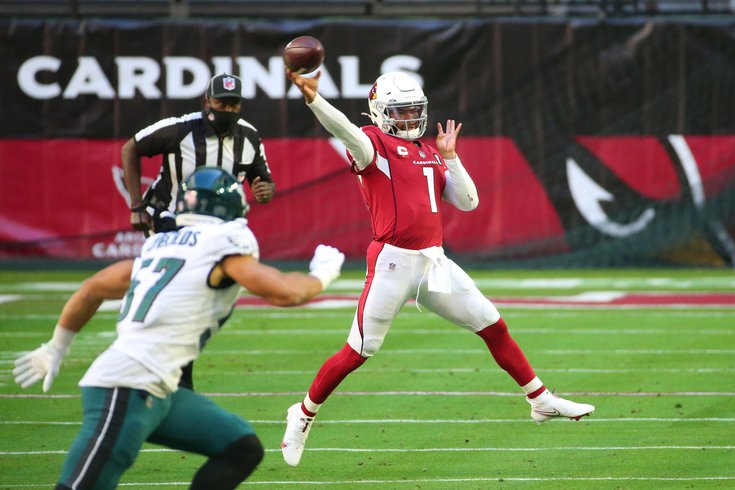 The Eagles' secondary must plaster again Kyler Murray and the Cardinals.

This time last year, the Arizona Cardinals were 4-0 with a point differential of +55. They actually started 7-0, before losing 6 of their final 10 regular season games, capped off by a feeble one-and-done showing in the wildcard round of the playoffs. In 2022, the Cardinals are out to a 2-2 start, which sounds respectable enough, but it has not been a pretty display of football. Here are our five matchups to watch.

Murray is at his best when the play has broken down, and he resorts to sandlot ball. While that is not typically a recipe for success long-term in the NFL, Murray is still a dangerous quarterback to face because of his unpredictability. After the Cardinals' loss to the Rams Week 3, Murray publicly complained about his receivers not staying "awake" on plays that he extends with his feet.

Kyler Murray on the dropped passes today: “I told guys you have to be awake when you play with me. No matter what the play is. I have free reign to do whatever, so when you sleep and you don’t think you’re getting the ball- you can’t play like that."

While you might question Murray's leadership in criticizing teammates publicly, there's also truth in his words.

Kyler Murray after loss to LA: “I told guys you have to be awake when playing with me”

On this play as Kyler tries to create time, receivers downfield look very much asleep. pic.twitter.com/DprVcBgMuX

"All the coaching details that go into that with off-schedule plays, we've got to be on it and understand that those are going to come up in the game and what he likes to do when he tries to make off-schedule plays, and he can make them," Jonathan Gannon said on Tuesday. "He has a very unique skillset. He's very dangerous. He's got arm talent. He runs around. He's not like a stick-and-cut guy, he's one of these guys. He's not afraid to give ground and lose 20 yards from the line of scrimmage and runs around and finds open people. It's hard to cover for a long time that long.

It's probably also worth mentioning here that quarterbacks with Murray's style of play can be very tiring for defensive linemen. You can chase him all over the field one play, and be completely winded on the next. The Eagles are theoretically at an advantage (or perhaps better stated, at less of a disadvantage) on that front because their defensive line is so deep.

On a side note, Murray has not often pushed the ball down the field. Look at all these dots within 15 yards of the line of scrimmage:

Murray is averaging a paltry 8.8 yards per completion and 5.7 yards per pass attempt.

Speaking of the defensive line, here's a snapshot of who they'll be facing this week. It's an old group.

Average age: 30.6. Combined career starts: 533! By comparison, the Eagles have a (mostly) veteran offensive line, and their starting five has a combined 371 career starts. So, you know, this Cardinals O-line has played a lot of football.

This team is screwed in the future, as there isn't much in the OL pipeline to replace these guys as their play declines, or they retire. But for now, it's a competent, though not a star-studded veteran group.

3) The Eagles' banged-up offensive line vs. the Cardinals' pass rush

As the week progresses, we'll learn more about the health statuses of Jordan Mailata and Isaac Seumalo, who both went down against the Jaguars Week 4. If there's a week in which the Eagles can feel OK about being down a pair of OL starters, it's this one against a very weak Cardinals pass rush.

Over 84 games in Arizona, Chandler Jones collected 71.5 sacks. He's now gone, and the Cardinals haven't adequately replaced his production. On the season, Arizona has a league-low four sacks (2 by J.J. Watt, 1 by Dennis Gardeck, and 1 by Zach Allen). By comparison, the Eagles had five sacks during a 13-play stretch against the Commanders Week 3.

4) The Eagles' receivers vs. the Cardinals' shrimpy secondary

The Cardinals' top three corners and both starting safeties are all sub 6-footers:

5) The Eagles' special teams units vs. themselves

The Eagles are ranked 30th in special teams DVOA through the first four games, and they're lucky that big mistakes such as the blocked field goal against the Vikings and the muffed punt against the Commanders didn't turn out to be disastrous errors.

Arryn Siposs hasn't been good either in blast away or "pin them deep" situations, and the Eagles might be without Jake Elliott this Sunday. The Cardinals don't have anything special to point to on their special teams units, like, say, the Jaguars did a week ago with Jamal Agnew, but special teams have to be a concern heading into this matchup. Otherwise, the Eagles are the far more talented team.