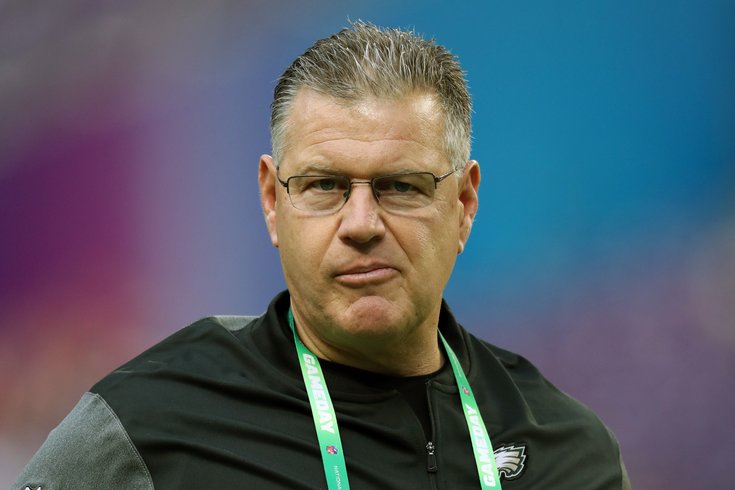 During spring practices, the Philadelphia media had a chance to speak with the Eagles' positional coaches. As I usually do, I camped out for the entirety of Jeff Stoutland's session, because he usually has a lot of interesting things to say about his offensive linemen.

As you might imagine, because the Eagles drafted an offensive lineman, Andre Dillard, in the first round of the 2019 NFL Draft, a large portion of the interview session was about him. We'll just show you Stoutland's words, re-ordered a bit to make it flow a little more cleanly.

• On when Dillard first popped up on his radar: "You try to make sure you know everything about every player. But to be honest with you, I always felt -- I think everybody felt -- that he was kind of out of our reach, to be honest with you. You can't go everywhere. You can't go out and visit all the players and work them all out. It's impossible. There's not enough time. The scouting department identified the players that we should probably get out and work out and interview, and get them in the classroom.

But it's funny, because the Saturday morning (the week) before the draft I just went through my list and I just felt like, anybody that I felt like I needed to know more about or I needed to know better, personally, he popped up on my radar, and I called him. I said 'Nah nah nah, we're going to... do you have time?' It was early in the morning. It was a different time zone. He said 'Give me a half hour,' and we called back and we Skyped. We did the Facetime thing, and I had a chance to speak with him in the morning. You never know in a draft what can happen. I said, 'I'm just making sure,' and we had a nice conversation, and when we spoke on the phone when we picked him, I said, 'What did I tell you?' So anyway, that was neat."

• On why he needed to have the Skype/Facetime/whatever session with Dillard: "Just the football intelligence part, and then like, how important is the game (to him)? I just wanted to double back on it all, and I felt very, very comfortable with it all, and very good about that conversation. I never thought anything would come of it, to be quite honest with you."

• On the need to make that call to Dillard: "When Mr. Lurie or Howie asks me a question about a particular player, I better have the answer. That's my job. I just didn't (with Dillard). I'll be honest with you. That Saturday morning, my wife goes, 'Where you going?' I go, 'Look, I'm going in the other room. Everyone just leave me alone for a little bit. I need to make one phone call and I'm good for the rest of the day.'

I needed more information. On players that you feel aren't going to be there when you're drafting, sometimes you don't spend as much time with those players. I mean, I watched every film. We analyzed every little thing he did, but personally, I just didn't have enough (information). I like when you go out to the school, you get a chance to spend the night before, you go sit down with them, you get in the classroom. The next morning you wake up, you do the workout, and if there's anything else you need to do, you hang around a little longer. I didn't have the chance to do that with him."

• On what sold him on on Dillard from a personal standpoint during that conversation: "I just liked the love of football, the importance of it to him. Being prepared. I like the fact that he's looking for someone who is going to challenge him.

I also thought it was important for him to get to know who I am, if this thing worked out. The compatibility between the player and the coach (is important), and I also just felt he was the perfect fit."

• On what first jumped out about Dillard's ability: "His foot and body quickness. He economized all his motion. There's no wasted stepping, no false stepping. You watch his body in protection, he's not a lunger. Players lunge and get beaten on the edge. Those kinds of things, to me, are glaring on the film. They may not be to some other person, but to me they are. And he's that way on the field out there (at Eagles practices)."

• On the possibility the Eagles might get Dillard as the draft was unfolding: "When you're sitting there, watching the draft, they're selecting all the defensive linemen, a lot of quality is getting pushed back, and you're saying, 'Holy cow, we might have a shot at this.' And it all worked out."

• On whether Dillard can get on the field as a rookie, if Jason Peters, etc., stays healthy: "The players that come out of college -- none of them, in my opinion -- are ready to play. There's work to do, and that's the process we're in right now, is to make sure he understands the offensive system, to make sure that he's utilizing the proper techniques that we're teaching, and right now that's what we're focusing on."

• Why aren't offensive linemen ready right away at the pro level?  "The expectations are, 'We drafted you (high), so you go and play.' But you look around the league, even in our conference, and look at some of the guys that were drafted in the first round, and look at where they are. I don't know. I just think that there's so much to teach these guys. There's so much at this level that you have to teach them, and for them to understand.

The speed of the game at this level... you know, when you see a stunt in college compared to a stunt in the NFL, it is so much quicker and so much faster. When a young player like this comes in, and says, 'OK, I have really good players around me, players in front of me that I'm able to watch on the film.' I use a lot of the stuff that Jason Peters or Lane Johnson have done in the past. There's nothing better than to show a player exactly how you want it to be done on the film."

• On Dillard having the size and frame necessary to play in the NFL, but adding strength: "He's already going there, trust me. He has already developed since he has been here, in terms of physicality, in terms of weight. To me he's already on that track. He is a lot like Lane, when he came out. There are a lot of similarities, in terms of his athleticism, he was a little more linear, but this individual is extremely quick, fast, and he has a lot of the good qualities that you look for."

• On what he has seen from Dillard in spring practices: "Consistent improvement. He improves every day. He's exactly what he was when we evaluated him. He's just smooth, a great athlete. A lot of people have asked me, or said, 'His weakness is run blocking.' I've heard that a million times. I kind of needle him with that a little bit.

But I don't necessarily believe that. Because a player was not asked to do that in college doesn't mean that he's deficient in that area. We do a lot of things here where we combination block. If we're going to combination block, one of the important factors is for the trail player to get hip-to-hip, shoulder-to-shoulder. Well, to be able to do that, you have to be able to close the distance, and man can he close the distance.

And that was on the video that we analyzed before the draft. You saw how fast he got into the guard, how quickly he surfaced that double-team block. That's part of run-blocking -- a huge part of it."