Eagles players getting no respect in fantasy football drafts 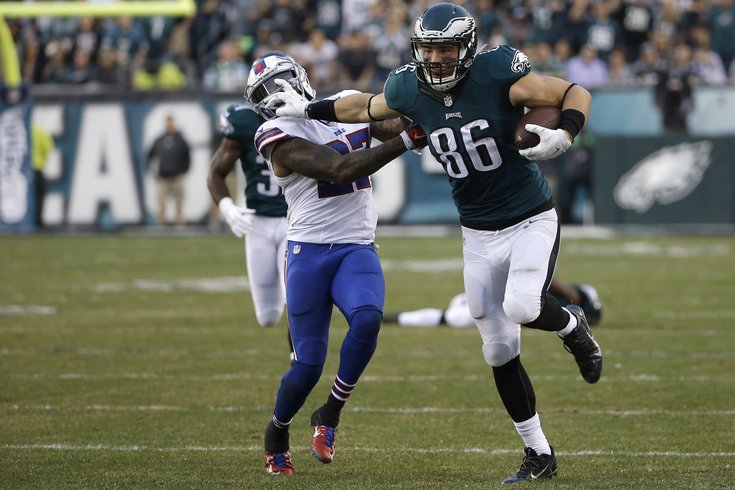 Zach Ertz is being underrated by fantasy football nerds.

If you're strolling around CVS or Walgreens this time of year, you'll start to see fantasy football magazines lining the shelves. (Do people still read things on paper?)

The people at fantasypros.com aggregated the average draft position at many of the more popular fantasy football sites and came up with average overall and positional rankings. Here is where various Eagles players ranked:

I agree with some of the rankings above and vehemently disagree with others.

Below is a list of every tight end in NFL history who had at least 2000 receiving yards after their first three seasons in the league:

Ertz is ranked behind guys like one-year-wonder Gary Barnidge and hasn't-done-jack Coby Fleener.

The area where Ertz hasn't produced is in the end zone, but there's really no discernible reason why he shouldn't. A season ago, Ertz was dealing with a sports hernia injury which slowed him down early on. Over the last four games (fantasy playoff season), Ertz caught 35 passes for 450 yards.

The Eagles are the 25th defense? Are people serious? Over the last two seasons, the Eagles defense and special teams has 18 touchdowns! Who gives a flying rats ass if they give up yards?

I mean, people are apparently drafting Johnny Manziel before Sammy Sleeves. Seriously, Johnny Football is ranked 30th overall among quarterbacks, and Bradford is ranked 31st. I assume that low ranking is due to fear that Carson Wentz is going to start. That's not going to happen, early on anyway, barring some kind of unusual circumstances.

Bradford will be the starter, and in my view is a low end #2 quarterback in 12-team formats.

I should preface this by saying that you should only take Sproles in PPR leagues, as Doug Pederson has said that he plans on moving Sproles around the formation and trying to generate mismatches against opposing linebackers. During the Chip Kelly era, Sproles wasn't used in the passing game creatively at all.

This is maybe more of a personal preference thing, but I hate having players on my roster who constantly appear on the injury report. When you look at Mathews' playing career, he has actually played in at least 12 games in five out of six years. However, during that time frame, he has appeared on the injury report a staggering 53 times. The Eagles do have more 1 p.m. games than they usually do this season, which at least helps in making early decisions on him for game day, but in my view, he's still just not worth the headache to get him in the fourth or fifth round.

Agholor is facing serious sexual assault accusations. Whether or not any actual charges stem from that, Agholor has a major distraction on his hands. Couple that with a fairly unimpressive showing in OTAs and minicamp, and I'd just stay away completely.

The Eagles like Smallwood and he could eventually become a useful weapon out of the Eagles backfield as a receiver, but he has to prove he can be a quality pass protector before he can get on the field. I assume Smallwood getting drafted at all is due to the presence of injury-prone Ryan Mathews entrenched as the starter, which I get, but he's not so valuable yet that I'd draft him as a handcuff.

Maybe one day Wentz will be among the top 5 quarterbacks drafted in your league, but for now, he's not likely to even dress on game day early in the season.