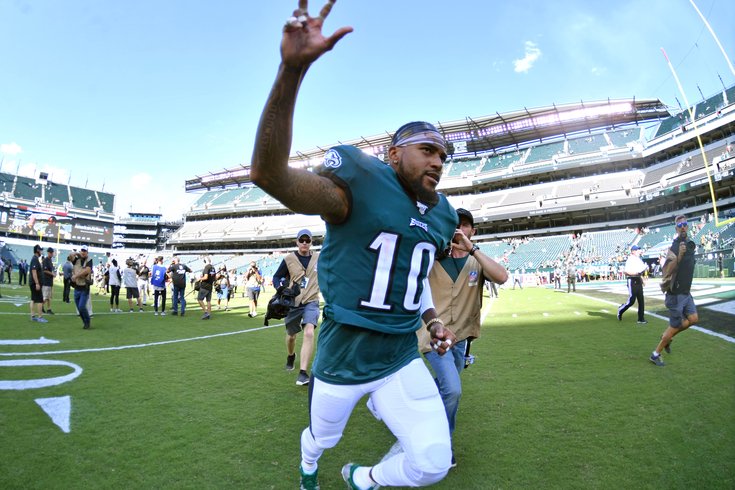 Here's where people around the country have the Birds ranked after the first week of the 2019 regular season:

How the newcomer starred: His stat line (11 carries, 25 yards) doesn't tell the whole story. Sanders saw a touchdown run called back because of a holding penalty and broke off a 19-yarder that showed off the burst and wiggle that coaches and teammates have been talking up all summer. He's sharing a backfield with Jordan Howard, Darren Sproles and Corey Clement, and snap distribution will change from week to week, but look for Sanders to be featured more and more as the season goes along.

#JimmySays: ESPN has a theme each week in their write-ups. This week is was rookie debuts, and I agree that Sanders looked better than his stats would indicate.

I imagine there was a wave of sweet nostalgia washing over Philly fans as they watched DeSean Jackson blow the top off an opposing defense in an Eagles uniform again. Now 32, DJax is a decade removed from his NFL debut with the Eagles under Andy Reid, but he looked like pretty much exactly the same guy against the Redskins on Sunday. Carson Wentz greatly benefits from Jackson's playmaking presence, and the wideout adds a dimension to the offense that already has proven playmakers in Zach Ertz and Alshon Jeffery. Speaking of sweet Iggles nostalgia, Wentz looked a lot like the guy who tore the NFL apart in 2017 once Philly's offense shook off the rust in the second half. Wentz is a legit MVP candidate and the Eagles are primed for a fierce battle with the Cowboys for the NFC East crown.

#JimmySays: Jackson going off for two long scores Week 1 is one of the best things that could have happened for the Eagles' offense. It shows opposing defenses that they can hit on those deep throws, and should loosen up the underneath areas of the field.

For one game, at least, it’s like DeSean Jackson never left — eight catches for 154 years and two long TDs. Carson Wentz has a deep threat.

#JimmySays: And now I'm beginning to realize everyone is going to mention DeSean Jackson.

I’m willing to excuse the slow start to not playing anyone in the preseason. It was scary, but by the end Carson Wentz had 313 yards and three touchdowns and the Eagles got a win. They’re fine.

#JimmySays: This is generally my overall take as well.

The early struggles against the Redskins were a bit baffling, but the Eagles managed to turn things around. The big plays to wide receiver DeSean Jackson were exactly what was envisioned when the Eagles decided to bring him back.

#JimmySays: The shaky corner play was not surprising to me early on. The lack of a pass rush was.

Took a half to knock rust off, but then QB Carson Wentz showed form everyone expects. Foot injury to DT Malik Jackson a tough setback.

#JimmySays: The Titans are 8th.

Carson Wentz looked just fine in his first action since last December, completing 28 of 39 passes for 313 yards and three touchdowns in a 32-27 win over the Redskins. DeSean Jackson certainly helped, as the former Washington receiver put up a spectacular Revenge Game performance with eight catches for 154 yards and two of those scores. Jackson will be 33 years old this December, but he can still vaporize most cornerbacks with his deep speed and route awareness. What the Eagles have to worry about is a defense that allowed Case Keenum to put up even better numbers than Wentz did — the journeyman went 30 of 44 for 380 yards with three touchdowns and no picks.

#JimmySays: Yep, for sure, the Eagles weren't perfect on Sunday, and they need to quickly clean up their pass defense.

The Eagles didn't fly out of the gate until they decided to let DeSean Jackson take over on the deep ball from Carson Wentz. Their running game and defense need work to get to championship level again, but Wentz is back in MVP candidate form with Jackson, Alshon Jeffery and Zach Ertz.

#JimmySays: The Packers are 6th here. Huh? Were they impressive Thursday night, and I missed it?