Here's where people around the country have the Eagles ranked heading into Week 6 of the 2021 regular season. Oh, and here's our version of these sellout rankings, too.

How they've improved: Hargrave has been the Eagles' best player through five games. He already has six sacks on the season, which is tops among defensive tackles and third overall in the NFL. It's also a half-sack less than his career high. Hargrave, 28, had four quality seasons with the Steelers before joining the Eagles in 2020. He was limited due to injury last season, but has turned into a dominant force in his second year in green.

#JimmySays: Yep, Hargrave has clearly been the best player on the team this season, and whoever is No. 2 is not even close. Hargrave has a real shot at being a First-Team All-Pro this year.

The Eagles were in desperate need of a big play late in Sunday's matchup against the Panthers. They got one in each phase of the game during the final five minutes of a 21-18 win. T.J. Edwards' blocked punt, Jalen Hurts' 6-yard touchdown run and a Steven Nelson interception of Sam Darnold turned a five-point deficit into a three-point victory that snapped a three-game losing streak. Next up for the Eagles is a huge measuring-stick game against the reigning champion Bucs on Thursday night. It will take more than a strong finish to beat Tampa Bay. 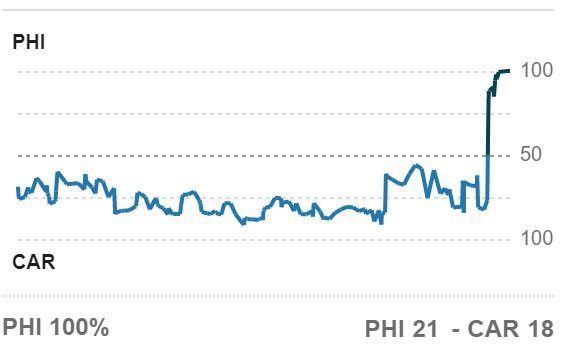 The Eagles are right where most of us figured they would be—young and retooled at a lot of spots, with some strength on the lines, and a young quarterback they have to find out about over the next three months.

#JimmySays: This was written by Albert Breer this week. In case you missed it, Breer tweeted a picture of a mutilated turtle after his alma mater Ohio State beat Maryland on Saturday, which is just psychopathic behavior.

No analysis of the Eagles given, but they remain in "The Muddled Middle" along with the Raiders, Titans, Seahawks, Steelers, 49ers, Vikings, Patriots, Falcons, and Football Team.

#JimmySays: Speaking of the Raiders, it will be interesting to see how their team responds in the wake of Jon Gruden resigning in disgrace. Maybe that Eagles-Raiders game Week 8 is more winnable?

DT Javon Hargrave has six sacks in five games, best among the league's interior linemen. He averaged 3.8 sacks over his first five seasons and has never had more than 6½ in any of them.

#JimmySays: Hargrave is beginning to get some love nationally.

For most of Sunday afternoon's tilt with the Panthers, it looked like the Philadelphia Eagles were headed toward a fourth consecutive defeat. The offense just couldn't get anything going against Carolina's stout defense.

However, the Eagles defense kept the team in the game, quarterback Jalen Hurts found the end zone twice on the ground, and at the end of the day, Philly squeaked out a three-point win to halt its losing streak.

Eagles head coach Nick Sirianni lauded his team's resilience while speaking to reporters after the game.

It was an admittedly gutsy victory that puts the Eagles within a game of .500. But getting their record evened out isn't going to be easy. Philly's next game comes on a short week against the defending Super Bowl champions.

#JimmySays: While I could do without the never-ending references to "Dawg Mentality" from Sirianni, the team never stopped playing hard on Sunday, and there's something to be said for that.

Darius Slay deserves the game ball for the Eagles. His two interceptions were a huge difference in a 21-18 win. The Eagles did not play well and probably didn't deserve to win, but they stole one thanks to their top cornerback.

#JimmySays: Beyond the two picks, Slay also followed D.J. Moore all day, and Moore was held to five catches for 42 yards. That was easily Slay's best game as an Eagle.

That was a tough, impressive road victory at Carolina. They made some big plays late to win it. Jalen Hurts rallied after a slow start.