Eagles aren't getting much production from Chip Kelly's draft picks 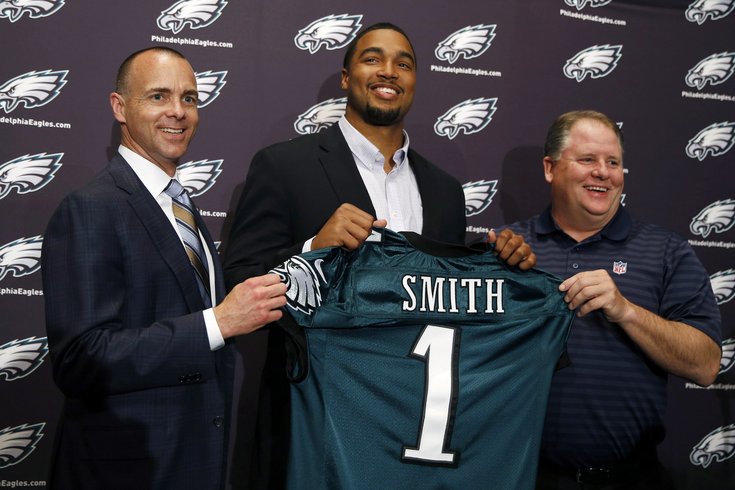 Since Chip Kelly became the Eagles' head coach, the Eagles have made 21 draft picks. Only 10 were active Week 2 against the Cowboys, and only five were starters. The Eagles are simply not getting enough production from their young players while many other teams around the league are. Let's take a look at all 21 of the Eagles' picks the last three years, and where they stand with the team:

• Lane Johnson: Johnson is the only Eagles offensive lineman who is playing reasonably well at the moment, and he is outperforming the two OTs who were drafted ahead of him, Eric Fisher and Luke Joeckel.

• Zach Ertz: Ertz has high expectations this season but has not yet developed into a complete tight end. Through two games, he has six catches for 63 yards, and no TDs, although he returned earlier than expected from a groin injury.

• Bennie Logan: Logan has been a force along the interior of the Eagles defensive line so far this season. He appears to be a player who is making a big jump in his third year.

• Matt Barkley: Traded for a bag of peanuts.

• Earl Wolff: Released by the Eagles, currently out of the league.

• Joe Kruger: Released by the Eagles, currently out of the league.

• Jordan Poyer: Released by the Eagles, now playing for Cleveland.

• David King: Released by the Eagles, now playing for Seattle.

• Marcus Smith: Healthy scratch last week against the Cowboys. Did not register a single tackle his rookie season.

• Jordan Matthews: Matthews had a very good rookie season, and his numbers in 2014 so far are good, however, he has struggled with drops his first two games this year.

• Taylor Hart: Active for the first time on game day last week in Atlanta. Had two tackles in Atlanta, one against the Cowboys. He could have a bigger role with Cedric Thornton expected to miss a couple games.

• Ed Reynolds: Released by the Eagles each of the last two years, now on the Eagles' practice squad.

• Nelson Agholor: Played the second-most snaps among Eagles wide receivers and Sam Bradford has missed him a few times when he has been open, but Agholor has not gotten off to a fast start. 4 catches, 36 yards.

• Eric Rowe: Has been active in each of the first two games, but has not been able to get on the field in the regular defense.

• Jordan Hicks: Entered the game against Dallas in relief of an injured Kiko Alonso, and played well.

• Randall Evans: Released by the Eagles, now on the Eagles' practice squad.

• Brian Mihalik: Released by the Eagles, not currently on an NFL roster.

That said, so far, it doesn't feel like the Eagles have had many big hits from their draft classes under Kelly's watch.