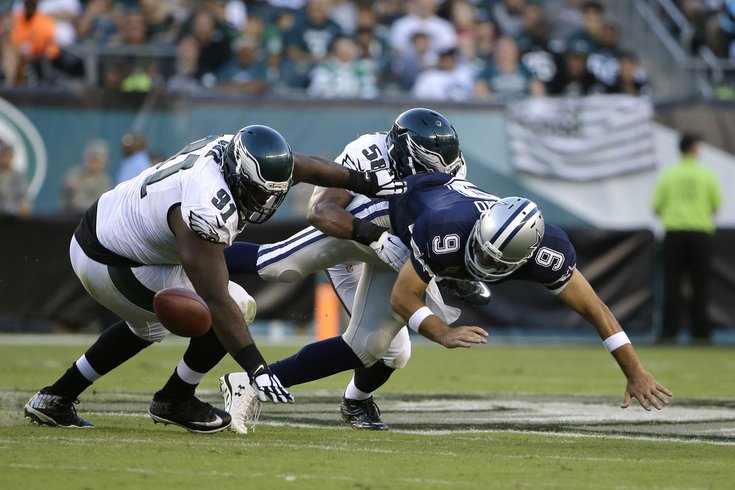 With news that Kiko Alonso will be out for some time with a partially torn ACL and Mychal Kendricks potentially on the shelf this week with a hamstring strain, rookie third-round pick Jordan Hicks will need to contribute at ILB for the Eagles. Against the Cowboys last Sunday, Hicks played well in relief of Alonso and Kendricks, racking up seven tackles and a sack/fumble of Tony Romo that led to an Eagles turnover. Let's take a closer look at Hicks' play last week against Dallas.

We'll show the bad first. In the third quarter, Hicks was left on an island against Cowboys RB (and receiving specialist) Lance Dunbar, who had 8 catches for 70 yards against the Giants Week 1. Dunbar has WR skills, and the Cowboys like to try to create one-on-one opportunities with him against opposing linebackers. Here they got Dunbar lined up out wide against Hicks at the bottom of the screen. The result:

That was on 3rd and 13. It's a good throw by Romo, and a really tough assignment for Hicks. The Eagles were out-schemed by Dallas here, but certainly you'd prefer better coverage from Hicks. My bigger gripe on this play is that Hicks didn't finish. Dunbar didn't catch this ball cleanly (I'm not sure it was even a catch at all), and if Hicks had stuck with this play and tried to knock the ball out, he might have prevented the completion anyway after being beaten.

If we're being apologetic for Hicks, we should note that he is not a cornerback, and that's essentially what he was asked to be on this play.

But his coverage wasn't all bad. Actually, the rest of the day, he looked pretty good in coverage. The Cowboys had several other occasions in which they were able to get one-on-one matchups with Hicks on Dunbar, but Hicks was up to the challenge. For example, here's a play when Dunbar is lined up in the slot (left side) one-on-one against Hicks. Brandon Weeden wants this all the way, but Hicks basically runs Dunbar's route for him, and there is nothing there for Weeden. Unfortunately, the Eagles get no pressure, and Weeden easily runs for a first down. But this is excellent coverage:

Here's the same alignment with Hicks on Dunbar in the left slot again. Dunbar runs an out route, and Hicks closes on him nicely. The ball goes elsewhere:

Here's another chance for Hicks on Dunbar one-on-one, this time with Dunbar coming out of the backfield. Hicks allows the short throw on 3rd and long, and does enough to keep Dunbar in front of him as backup arrives.

Again, there's some good and bad above, but Hicks is already much better in coverage than DeMeco Ryans, in my opinion.

Hicks against the run

My favorite play of Hicks against the run was on a four-yard gain by Joseph Randle. Hicks begins this play on the opposite side of the formation, but he is able to make the LG whiff (who proceeds to fall on his face), then race all the way to the sideline and deliver a nice shot on Randle. Hicks shows good speed here, and this is very well done.

Here's another example of Hicks using his quickness to avoid a blocker and then make a tackle. Center Travis Frederick tries to get to the second level to block Hicks, but Hicks makes him whiff, then cleans up on Darren McFadden:

Here's an example of Hicks playing his assignment. On this play, it looks like the Eagles have Connor Barwin crashing down inside, and it is Hicks' responsibility to quickly get outside of the RT and set the edge, which he does. The run is forced inside and goes nowhere.

It wasn't all good in regard to playing his assignments. Here Hicks picks the wrong hole. He thinks McFadden is going to bounce this outside, so he jumps outside to cut off that gap, where the Eagles already have Barwin. After Hicks commits to the outside, McFadden cuts it up and gets nine.

Hicks as a blitzer

We only got one real chance to see Hicks as a blitzer on Sunday, and here's what he did.

When Alonso and Kendricks went down on Sunday, Hicks got his first real chance as a pro to see extensive action in the regular defense, and the game did not seem to be too big for him in any way. He wasn't perfect by any stretch, nor should he have expected to be, but what he showed against Dallas was clearly encouraging.