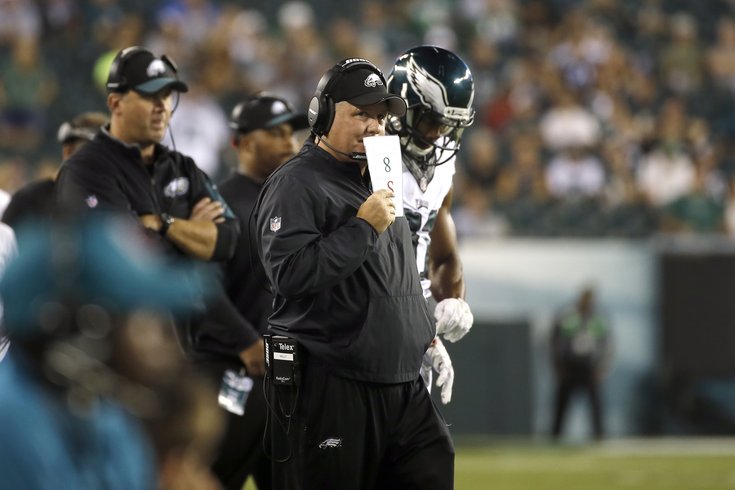 Chip Kelly looks on from the sideline during the Eagles' 20-10 loss to the Cowboys.

Less than 24 hours after falling to 0-2 thanks to a 20-10 loss to the Cowboys, Chip Kelly met with the media and admitted that he was embarrassed by his team's performance in their home opener.

“I don’t know how the players felt, but I was embarrassed," the Eagles coach said Monday. "That’s not the way we’re supposed to play football and that’s not what we’re all about, but we didn’t play well yesterday and I was embarrassed in how we played yesterday.”

The Eagles were especially bad on offense. They rushed for just seven total yards, their lowest in a game in over 50 years. Through the team's first two games, their retooled backfield is off to a historically bad start.

And it all starts up front on the offensive line, especially in the middle.

Gone are guards Todd Herremans and Evan Mathis, two veterans that had started a combined 181 games for the Eagles. In their places are Allen Barbre and Andrew Gardner, who had a total of 16 combined starts in the NFL prior to this season.

Kelly didn't single out the play of his guards for the inability to run the ball, but rather placed the blame on the whole of the offensive line.

"It wasn't all on [Barbre, Gardner and center Jason Kelce]," Kelly said. "There were some times when it was the defensive end that was up the field. But no one on the offense graded out well."

But the Eagles coach doesn't foresee any personnel changes on the line.

“The guys we have are the guys we’re playing with for the remainder of the season," he said. "So it’s not about [changing personnel]. It’s about putting in a game plan that will be effective against the Jets and that’s really what our focus is on.”

There hasn't been much proof so far that the Eagles can improve at running the ball without trying different personnel, but Kelly was quick to point to a few examples of when his team had bounced back from bad performances in the past. Specifically, he pointed to last year's loss to the Niners and last night he mentioned the 2013 loss to the Giants.

"I feel like it can be fixed," Kelly said. "We've had a couple games since we've been here that we haven't run the ball well, but we've rectified that. We didn't run well against San Francisco a year ago. I thought that was kind of a game that stood out that we didn't do a good job running the football in that game. But we straightened things out as we went along."

In Week 4 against San Francisco, on the heels of a 54-yard rushing performance vs. Washington, the Eagles gained just 22 yards on the ground. Then, over the course of their next four games, the team rushed for a total of 648 yards (or 162 yards/game). The year prior, the Eagles rushed for 48 yards in a loss to the Giants, which dropped them to 3-5 on the season. The Birds finished that season 7-1 over their last eight games, averaging slightly over 170 rushing yards/game.

That, coupled with two solid offensive quarters against the Falcons, has Kelly believing his team will again turn it around. However, the Eagles line was decimated with injuries against the Niners last season, and they had players return from injury -- Mathis, Kelce and Lane Johnson -- that provided a boost to the rushing game.

Unfortunately, those reinforcements won't be coming this year.

And when it comes to putting together an effective game plan, that responsibility lies with the coach-slash-GM; Kelly was willing to admit as much on Monday. But Kelly's now directly in the crosshairs following "The Summer of Chip," in which he completely overhauled the roster to better fit his scheme.

“We’re not putting together a plan that’s good enough for us to execute offensively, and we’re not executing it," Kelly added. "So that kind of falls on the coaching staff on the offensive side of the ball and that’s what we have to spend our time on this afternoon.”

As for the fans, Kelly had the following message:

"We’re upset too, and we’ve got to get it straightened out this week when we go play against the Jets.”

Just how they plan to fix it, well, that remains to be seen.