Through two games, Eagles rushing attack has been historically bad

But the blame belongs on the offensive line ... and Chip Kelly 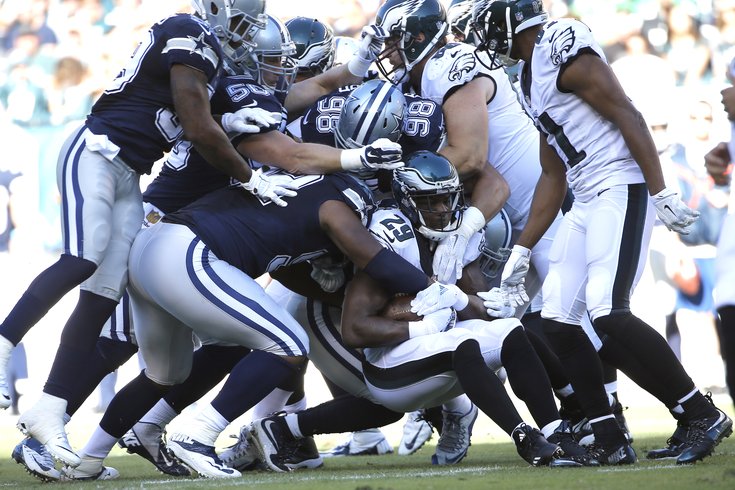 DeMarco Murray is stuffed by the Cowboys ... again.

Where do we even begin?

There were 60 minutes of something resembling football played at Lincoln Financial on Sunday, and for the now 0-2 Eagles there only a handful that would make one think this team is anything better than their record suggests. Following their Week 1 loss to the Falcons — especially after showing a marked improvement in the second half of that game — it wasn’t hard to imagine Chip Kelly’s team bouncing back against the Cowboys.

Instead, they took a step back … or maybe a few dozen.

"I think everybody is [surprised how the team's started]," Kelly said after the game.

It was a complete disaster, from start to finish; to categorize it as anything less would be letting this team off the hook.

For the second week in a row, the Eagles struggled to get anything going on the ground. Against the Falcons, they finished with 63 rushing yards on just 16 carries, leading some to question if their unbalanced play calling — they passed the ball 52 times in Week 1 — lead to their ineffective rushing attack.

On Sunday, it was even worse. The offense finished with just seven (SEVEN!) yards on 17 carries. That’s their lowest team total since 1961 when they rushed for negative-12 yards against Washington.

And any time Sam Bradford is your leading rusher, you’re in trouble.

Today's 7 rushing yards is fewest for any Eagles or Oregon team that had Chip Kelly on the sidelines ...

It's certainly not the start to the season Kelly and his two new running backs, DeMarco Murray and Ryan Mathews, had hoped for. Here's a look at the team's rushing stats through the first two games:

Since 1960 — or as long far back as Pro-Football-Reference goes — there's never been a running back with anywhere close to as poor of a start as Murray. Through the first two games, no player at that position has ever had 20 or more carries and so few rushing yards. In fact, only seven players have ever had 20+ carries and 50 yards or less through the first two games of the season.

Here they are, sorted by yards per attempt:

The closest to Murray in terms of total yards was Montee Ball in 2013 with the Broncos, but even he out-rushed the Eagles back by nearly 30 yards. Ball was also the backup in Denver that year to Knowshon Moreno, not to mention the fact that the entire running game played second fiddle to Peyton Manning, who won his fifth MVP that season.

Furthermore, there have only been five other teams in NFL history — the Eagles also did it in 1962 — that have had at least 30 rushes and 70 yards or less through their first two games.

Of the previous five teams listed above, only the 1997 Lions won more than 5 games. They finished 9-7 and made the playoffs, but lost in the Wild Card round.

In Kelly's first year at the helm, the Eagles led the NFL in rushing. Last season, they finished ninth. So far this season, they're dead last.

"Right now, it doesn't matter who the running back is, we are not doing anything up front to give him an opportunity."

For the record, Murray signed a five-year, $40 million contract, while Mathews inked for three years and $11 million.

Not all the blame — or even most of it — can be placed on Murray, however. It's not like Mathews or Sproles are faring much better. The first place to cast blame is on the offensive line and, through the transitive property, the head coach.

He's the one who let both of his Pro Bowl guards walk this offseason, only to replace them with significantly lesser talents. But ask center Jason Kelce — his early snap led to a crucial fumble in the fourth quarter — and he says it's on the entire line.

"Right now, it doesn't matter who the running back is, we are not doing anything up front to give him an opportunity," Kelce said in the locker room following the loss. "We have to get this fixed up front. We have to get it better."

And as for the two new guards on either side of him?

"It doesn't matter who is next to me if I'm not getting my job done," Kelce added. "I don't think [having two new guards] has much to do with why we're struggling. We're just not getting the job done."

Kelly agreed with his center's assessment, saying that it was his offensive line's inability to move the Cowboys defensive front than anything the running backs were doing.

"Very disappointing," Kelly said when asked about the Eagles' inability to run the ball. "We couldn't get anything started. We weren't even giving our running backs enough time to assess if there was a hole or not. Just too much penetration up front, too many guys in the backfield."

"We just couldn't block them," he added.

But isn't that the point?

The decisions to let Todd Herremans walk and cut Evan Mathis — much more so than replacing LeSean McCoy with Murray — have crippled this team so far this season.

Andrew Gardner, who was named the starting right guard this offseason, hadn't started an NFL game until last year with the Eagles, his fifth in the league. On the other side, Allen Barbre is starting for the first time in his career at guard. His eight other starts — one last season and seven in 2003 with the Packers — were all at right tackle.

So when you have Kelly saying those lineman, the ones that he wanted to be his starters, didn't give the running backs "a chance to get anything started," it's hard to really fault the players.

And when the Eagles coach points to that unit's inability to move the Dallas defensive line as the reason he called two passing plays from the three yard line, the second resulting in a costly interception, it excuses one mistake -- his unbalanced and ultimately questionable play-calling this season -- while exposing another, one that's hurting the offense even more.

Kelly, in his first season with control over the 53-man roster, doesn't have faith in the players he hand-picked. It's why the Eagles have only run the ball 33 times in two games this season after averaging close to 30 attempts per game in 2014 and over 31 per game in 2013. It's why they have their lowest rushing total through the first two games since 1970. And it's why the Eagles are 0-2.

That lack of run production has a trickle-down effect into the passing game as well. Bradford finished 23-for-37 for 224 yards, a pair of interceptions, a fumble, and a garbage-time TD. After ranking in the top five in the NFL in yards from scrimmage and points scored each of the last two seasons, the Eagles currently rank 25th and 28th, respectively.

"If we knew [why the run game was struggling], we wouldn't be having these problems," a dejected Bradford said after the game. "It's one of those things, obviously, I think we are all really frustrated right now. But we are not going to give up; we are not going to quit."

Let's hope not. Because somehow, the NFC East is still wide open.