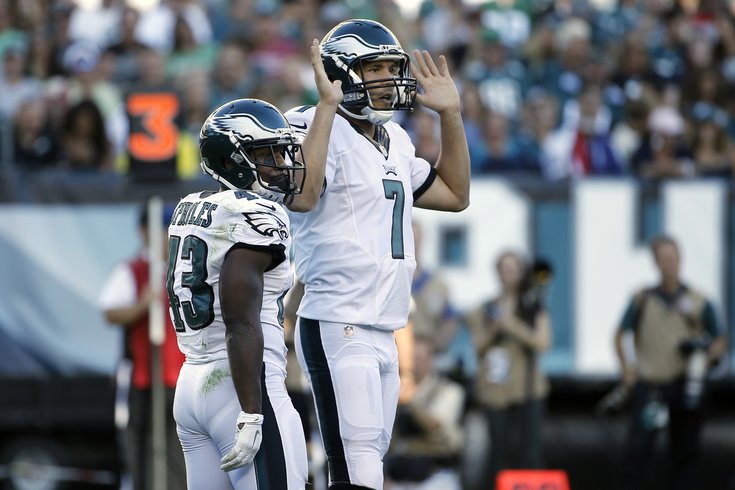 Sam Bradford explains to the Cowboys defense that he doesn't want any trouble and they can have his lunch money.

In what was one of the worst offensive performances I've ever seen, the Eagles lost to the Cowboys at home, despite the Cowboys missing four starters on defense. Win or lose, as always, our 10 post-game awards!

Chip Kelly was rather succinct after the game. "We just didn't block them," said Chip. No kidding. 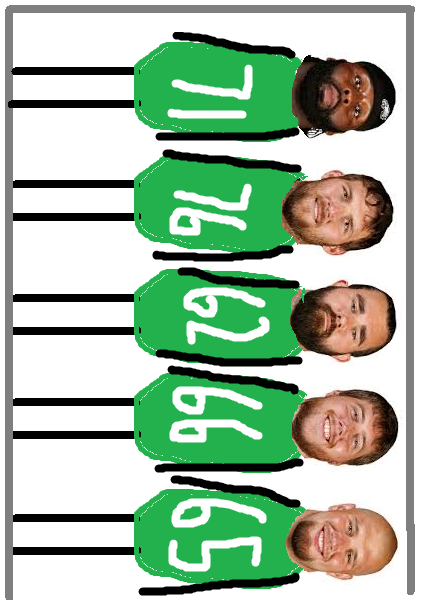 The 'Worse Than Zero' Award: The Eagles' rushing attack

For almost the entirety of the game the Eagles had negative rushing yards. At one point they had 9 carries for -14 yards. After some garbage time rushes, they finally finished with 7 rushing yards. 7 freaking rushing yards! I mean, Cowboys backup QB Brandon Weeden had 11! Weeden has as many rushing yards this season as DeMarco Murray.

This award was won last week by Malcolm Jenkins. This week, take your pick of Eagles receivers who dropped passes. Jordan Matthews had two drops a week after a his drop ended the game. Riley Cooper got open (shocker) past Morris Claiborne, and he couldn't help but continue to be useless. Drop. And a Zach Ertz drop led to a Cowboys pick that essentially sealed the game. Awful. I would draw the Eagles' receivers with cinderblock hands, but frankly, it's not even worth it.

After the Eagles defense forced a fumble and returned it to the Cowboys' 30 with a chance to narrow the deficit to a one-score game even if they only kicked a field goal, Jason Kelce fired a snap into an unsuspecting Sam Bradford's chest. Fumble. Cowboys ball. Cut. Print. Awful.

The 'Nobody Wins' Award - The Cowboys

The Cowboys got another game in the win column, but they lost their quarterback with a broken clavicle. It might only take 8 wins to take the NFC East. Not that the Eagles look like they can even win ONE right now. It's WIDE OPEN, Redskins and Giants!

The final score was 20-10, which is one of the most misleading scores I've ever seen. In no way whatsoever was this a 10-point game. It's almost unsatisfying to see a score that reasonable, because there was nothing reasonably professional about the way the Eagles' offense played.

The 'Not You Too!' Award: Eagles special teams

Even the Eagles special teams got outplayed by the Cowboys, as Dallas blocked a punt and returned it for a touchdown. In the past the Eagles dominated on special teams. Not so far this year.

The 'Hey, At Least the Defense is Good' Award: The Eagles defense, I guess

For one game they were good, anyway. Of course, now Kiko Alonso and Mychal Kendricks are injured and the Eagles have lost the time of possession battle by more than 10 minutes in each of their first two games. So, great, I guess. The defense played well. Unfortunately, they're going to be dead by the end of the season if the offense can't pick up an occasional first down.

The Silver Lining Award: The Eagles' fan base

It's only one loss? They lost horribly in back to back games against the Cowboys and Giants in 2013 and then bounced back? Anyone buy that? No? OK, I tried.