Sam Bradford was inaccurate against the Cowboys, in gif form 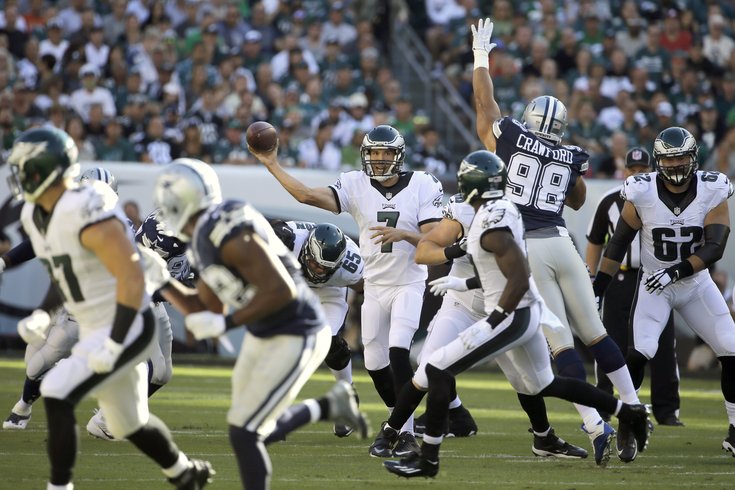 There's a better chance than not the result of this play wasn't positive.

The Eagles' loss to the Cowboys yesterday was so gross that Eagles fans are almost dumbfounded, looking for answers. Was it scheme? Is Chip Kelly way in over his head in the NFL? Is there some kind of grand answer to the Eagles' problems?

Personally, I just don't think the Eagles made any plays offensively, easy or hard. They simply stunk. The Eagles couldn't catch, they absolutely couldn't block, and Sam Bradford didn't throw the ball well, as we'll show below. While he took his share of the blame during other portions of his day-after press conference, Kelly echoed those blocking/catching/throwing sentiments this afternoon.

"It's a fundamental football game," said Kelly. "I think the blocking, throwing, and catching aspects of things are the ones that, you know, we didn't catch the ball very well last night, and at times we didn't throw it very well. So I think it's a combination of all those things, and unfortunately, one of them would rear it's ugly head on a particular play. So it wasn't one specific person, or one specific scheme, but a lot of that just comes down to fundamentals."

In case you missed it, earlier this morning we showed (in gif form) all the Eagles' drops the first two weeks of the season, as well as all the Eagles' negative run plays yesterday, which often showed a complete breakdown in blocking.

Here we'll take a look at a number of throws that Sam Bradford simply missed yesterday:

This is the corner throw that Bradford made with excellent precision twice against the Packers in the preseason. He used Jordan Matthews' height to his advantage, throwing the ball with zip high and toward the sideline. Against the Cowboys, this was a severe under-throw that Bradford was lucky was not intercepted.

It looks like Bradford had his eyes on Jordan Matthews in the middle of the field, and changed his mind mid-throw when he saw #59 jumping the route. The result is this ugliness. This isn't an "inaccurate throw" as much as it is just an ugly play that isn't going to inspire the team around him.

This is just an awful throw. For one, if you're throwing to the back of the end zone, typically you won't mind missing high, because the worst that can happen is an incomplete pass. Bradford explained after the game that he threw this ball because Cowboys LB Sean Lee had his back turned to him, and therefore couldn't see a pass coming his way. That's fine and good, but when you throw the ball with no velocity whatsoever, not to mention RIGHT AT THE DEFENDER, if he turns around, he's going to pick it off, which is what happened here.

Nelson Agholor is open, and Bradford sails it over his head.

This is in garbage time, so it didn't really matter, but this throw to Josh Huff is way short.

The offensive line couldn't block, and Bradford's receivers did not help him much as they dropped more than an acceptable number of passes, but Bradford needs to play far better or this season is going nowhere.