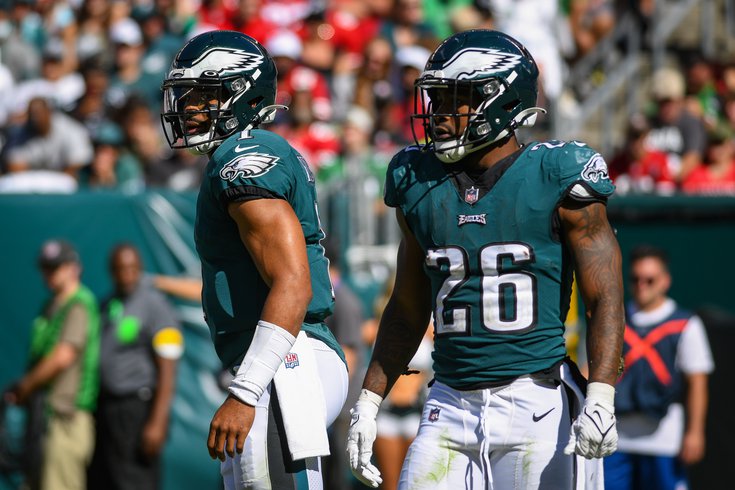 A common scene in Eagles games this year: Miles Sanders without the ball in his hands.

It seems like ages since the Eagles last played, but they'll finally take the field in Las Vegas against the Raiders Sunday in the late afternoon following a mini-bye week (after their Week 6 loss on Thursday to the Buccaneers).

And it's nice, after the layoff, to have a game to look forward to that the Eagles seem like they have a pretty good chance of winning. But that is only going to happen if they can buck some recent trends, some of which we'll discuss below in our latest slate of over/unders to consider heading into Week 7.

And so, before kickoff in Sin City, take a dive into some interesting analysis and predictions ahead of Eagles vs. Raiders:

This is the current total at most sports books, and as the oddsmakers often are, they seem to be right on the money here. The two teams in question combine to score exactly 47.3 points per game. Philly has scored 30 or more just twice so far this season — though they have had some pretty good defenses on the schedule so far like the Panthers and 49ers.

The Eagles' and Raiders' defenses combine to allow 49.3 points per game this season, with both clubs in the middle of the pack in that metric. The Eagles unit has played the Bucs, Chiefs and Cowboys, three of the best offenses in the sport, which helps to explain why they allow so many points. Philadelphia's defense should be able to handle the Raiders a little bit better. And with neither offensive unit lighting up the world on the regular — although Vegas does have the ability for explosive plays — we're going to make the boring and unpopular prediction that this will be a low scoring affair.

Good things happen when Sanders is allowed to run the football. The problem is, for whatever reason, head coach Nick Sirianni isn't letting his running back get any kind of momentum this season. The third-year pro is getting less than 10 rushing attempts per game, despite the fact that he's running for 4.7 yards per try. He's also yet to score a touchdown this season, leaving his fantasy owners desperate and looking for a buyer.

It's really hard to sustain an offense that barely even tries any designed runs. Jalen Hurts has five rushing touchdowns and 30 more rushing yards than Sanders this year. And while it's a huge plus to have a quarterback who can utilize his legs as frequently as Hurts does, failing to involve your running backs can make RPOs and play action passes a lot less effective. There are a ton of reasons why Sanders needs to be involved more, and eventually Sirianni has to see the writing on the wall, right?

Philly leads the NFL in penalties committed (and accepted by the other team) and it's not even close. Their nine penalties per game (and 54 total) are 1.2 per game more than the team second on the list. A veteran team shooting itself in the foot is not a winning strategy, and thankfully the Eagles have been clawing their way back. They had just four flags accepted by Tampa in their Thursday night loss.

Because they're trending in the right direction, we set the over under below their average of nine. The team should continue that, and will hopefully — eventually — play its way away from being the leader in this undesirable distinction.

It's pretty hard to win football games when your opponent has the ball for 10 minutes more than you per game. But that's where the Eagles are so far this season, possessing the football for just 25 minutes and 53 seconds on average, the second worst rate in the entire NFL. Last week, the Eagles barely eclipsed the 20-minute mark with the ball.

It's not only tough to ask your defense to play well for 40 minutes, it's also a direct reflection of the offense's strategy. The 2021 Eagles are not running a fast-paced, no-huddle, Chip Kelly-like scheme. They're just pass-happy, and not letting their running backs keep the ball away from their opponents. It's no coincidence that they have run the third fewest total plays of any team through six games played. The law of averages says the Eagles can't keep this up. They have to eventually run the ball a bit. Sunday afternoon they will at least get to 26 minutes.

The Eagles have a modest 11 sacks so far this season, which through six games is less than two per contest. In addition, their defensive line creates a quarterback hurry just 8.5% of the time (6th worst), has created just 50 total pressures (8th worst) with Jonathan Gannon's defense blitzing a putrid 13.8% of the time (the fewest of every team not named the Raiders).

Las Vegas likes to go down the field, so the front seven creating some pressure could go a long way toward helping the secondary keep big plays from marring this game. Their offensive line isn't spectacular, and has allowed 17 sacks of Derek Carr (the 8th most). The Eagles line is supposed to be a strength, and has been too quiet this season. They're too good to be held in check week after week. We're calling more than one sack.