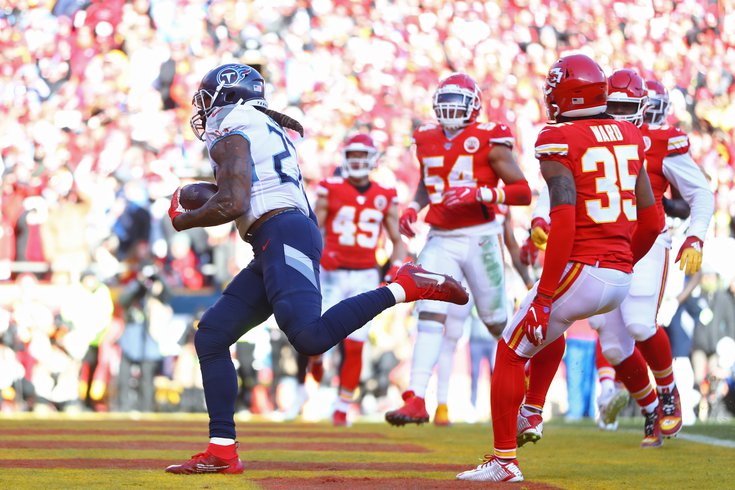 It's kind of hard to determine if the Titans are better off beating the Chiefs, or not.

In past seasons, Philadelphia Eagles fans generally rooted for their own team, and kept an eye on the rest of the NFC, with a focus on the NFC East. They'll still do that in 2021 (for now, I guess), but there are even more peripheral rooting interests for Birds fans this season because they own 2022 draft picks from other teams.

And so, each week we'll lay out a rooting guide for non-Eagles games on the NFL schedule, and yes, I'm aware that most of the below is obvious. You can also check out the latest Week 7 odds and read all my picks, here. 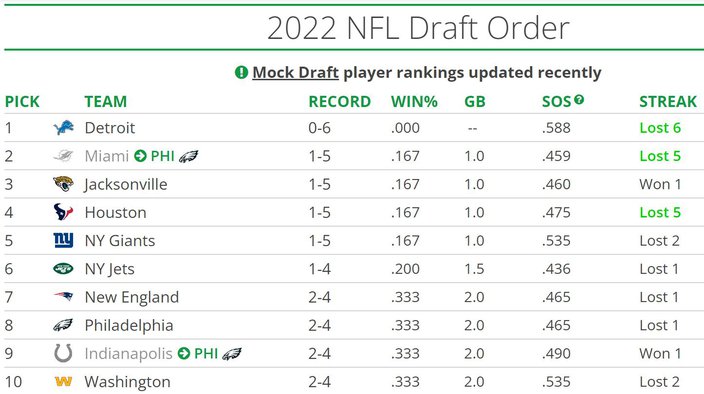 • Football Team at Packers: The Football Team has been really bad this year, and arguably one of the league's biggest disappointments. A loss to the Packers would pretty much slam the door shut on their 2021 season. At some point it'll be better to root for them to win games, but we're not there with them yet.

• Panthers at Giants: It's only Week 7, and the Giants' 2021 season has already been flushed down the toilet. From here on out, it's better if they win some games so (a) they wreck their draft positioning, and (b) they think about keeping Joe Judge around for another year. (At this point, I can't imagine there's any hope for Dave Gettleman sticking around.)

• Falcons at Dolphins: Last Sunday, the Dolphins lost to a Jaguars team that had previously lost 20 straight games. As you're no doubt aware, the Eagles own the Dolphins' first-round pick in 2021, unconditionally, which feels likely to end up in the top 5. A loss to another bad team like the Falcons would further cement that likelihood.

• Jets at Patri*ts: It's best if all the worst teams in the NFL (the Jets being included in that group) win games so the Miami pick can climb as high as possible.

• Chiefs at Titans: The Titans somewhat surprisingly beat the Bills last Monday night, keeping their lead in the AFC South at two games over the Colts. They'll face another AFC behemoth in the Chiefs Week 7, and then play the Colts on the road Week 8. The most ideal scenario over the next two weeks would be as follows:

The would give the Titans a two game lead in the AFC South, with a head-to-head advantage, which would be a nice comfortable cushion, but one that would keep the Colts competing hard.

The worst case scenario, a Carson Wentz injury aside:

That would create a tie in the AFC South, with the Colts having all the momentum going forward.

I think we just wait and see how this week plays out, and then based on the Week 7 results, you'll know which team to root for between the Titans and Colts Week 8.

• Bengals at Ravens: Down the line, the Bengals could be competing with the Colts for a wildcard spot, so the more games they win the better. The Ravens feel like a pretty good bet to win the AFC North.

• Lions at Rams: Again, like in the Jets explanation above, it's best if the worst teams in the league win games.

• Bears at Buccaneers: The Giants own the Bears' first-round pick in 2022.

• Saints at Seahawks: The Seahawks might end up losing a lot of games this season with Russell Wilson out. It's best if they win some games, as they're 2-4, and will likely be in competition with the Eagles' picks for draft positioning.