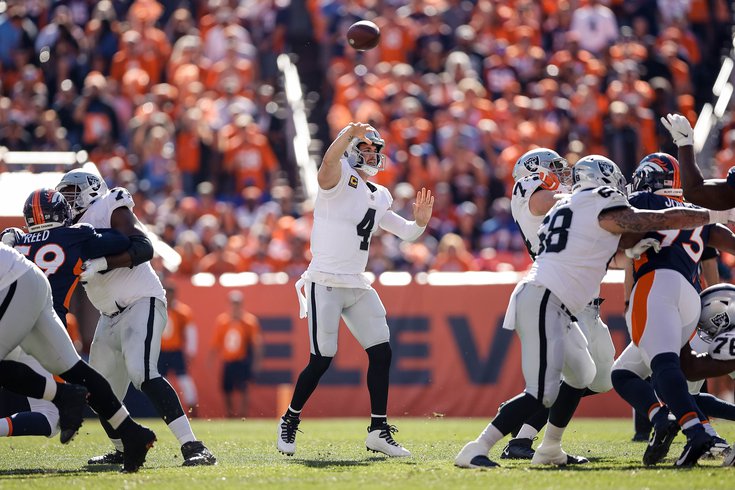 For the gambling enthusiasts, here are my Week 7 NFL picks. To note, the team logos indicate who I think will win the game, not cover the spread. At the end of the picks, I'll note a few teams that I like based on the spread — with all lines coming via Sidelines.io.

Broncos at Browns (-2): The Browns will be starting Case Keenum on Thursday Night Football in place of Baker Mayfield. That's not ideal, but it's also not devastating, as Mayfield hasn't exactly lit the world on fire so far this season. Keenum is also playing under Kevin Stefanski, his former quarterback coach during the Vikings' 2017 season in which they made it to the NFC Championship Game.

In case you want to relive that NFC Championship Game during a down Eagles season, here you go:

Anyway, back to the Browns. The bigger issue for Cleveland is that the Browns will be without running backs Nick Chubb and Kareem Hunt, meaning that Keenum is going to have to shoulder the burden of moving the football against a good Broncos pass rush. With Chubb and Hunt out, the Browns' play action-heavy passing game likely won't be as effective, no matter who the quarterback is. Keenum will also (reportedly) be without RT Jack Conklin.

Meanwhile, the Browns have a slew of other players listed as questionable, such as WR Odell Beckham, LT Jedrick Wills, C JC Tretter, DE Jadeveon Clowney, DT Malik Jackson, LB Malcolm Smith, and LB Mack Wilson, which isn't great on a short week. LB Jeremiah Owusu-Koramoah will also be out, and WR Jarvis Landry is on IR, but he could be activated Thursday, and play.

The Broncos aren't exactly a picture of health themselves, as Teddy Bridgewater will likely play on an injured foot, while the Broncos will also be without WRs Jerry Jeudy and KJ Hamler, as well as pass rusher Bradley Chubb. They also have an offensive line that got absolutely wrecked last Sunday against the Raiders, and will now have to face one the best pass rushes in the NFL in Cleveland.

Denver is healthier, but the Browns are still probably better. After winning three games against garbage competition in the Giants, Jaguars, and Jets, the Broncos have looked bad the last three weeks against a trio of better teams in the Ravens, Steelers, and Raiders.

I like Cleveland's chances of winning an ugly game in the trenches, and rallying behind Keenum offensively.

Why did I write so much about this game? 🤷‍♂️

Chiefs (-5.5) at Titans: The Titans began a tough four-game stretch against the Bills, Chiefs, Colts, and Rams with a big home win.

The Chiefs are obviously the better team overall with the more explosive offense, but Derrick Henry and the Titans' rushing attack against the Chiefs' terrible run defense is a matchup that makes me think the Titans will at least keep this game close. Give me Tennessee and the 5.5 points.

They're a broken team right now that is bad on both sides of the ball, while the Falcons have at least appeared capable of beating the NFL's worst teams.

Jets at Patri*ts (-7): Gillette Stadium is one of the worst venues in the NFL for speedy exits at the conclusion of games. When you go to Patri*ts games, prepare to sit in heavy traffic on your way out. The delay in getting home probably didn't feel so bad when the team was dominating for two decades, but I'm sure it sucks bigtime with the team being 0-4 at Gillette in 2021.

Patri*ts fans should get their first enjoyable ride home of the season this Sunday.

Panthers (-3) at Giants: The Panthers suck, but the Giants suck more.

Bengals at Ravens (-6.5): The Bengals are no longer a doormat team, but it's hard not to be impressed by what the Ravens did to the Chargers last Sunday.

Eagles at Raiders (-3): So far this season, the Eagles have played three opponents — the Cowboys, Chiefs, and Buccaneers — with explosive offenses. They'll face another one on Sunday in Las Vegas, as Derek Carr leads a passing attack featuring TE Darren Waller and an intriguing trio of young wide receivers in Henry Ruggs, Bryan Edwards, and Hunter Renfrow.

In those three games against the Cowboys, Chiefs, and Bucs, Nick Sirianni has aired the ball out in hopes of matching points against those high octane offenses. He ran the ball with his running backs in those games a combined 22(!) times, or 7.3 times per game. That proved to be a nonsensical approach, particularly against a pair of teams in the Cowboys and Chiefs, whose defenses are ill-equipped to stop strong rushing attacks.

The Raiders are in the same boat as the Cowboys and Chiefs, in that they have struggled stopping the run this season. In their two losses, their opponents — the Chargers and Bears — each had 30+ non-QB rushing attempts. Game flow certainly factored into that, but those teams were effective in keeping the Raiders' offense off the field.

Will Sirianni adapt, and try to control the ball, while taking some pressure off of struggling quarterback Jalen Hurts? I doubt it. Based on the three-game sample size against other explosive offenses, the Eagles will try to beat the Raiders playing the type of game the Raiders would prefer.

Lions at Rams (-15): Jared Goff got publicly criticized by head coach Dan Campbell after a bad loss to the Bengals last Sunday.

"I feel like he needs to step up more than he has."

I think that paper is folded enough already, Dan. Anyway, Goff is likely to get blown out by his old team this week.

Texans at Cardinals (-17.5): There are no shortage of good survivor pool picks this week, as there are three games with a spread of at least 12.5 points. I like this one the best.

Bears at Buccaneers (-12.5): Does this line seem high to anyone else? The Bears aren't so bad that they should be 12.5-point dogs, right? Eh, I'll just stay away.

Saints (-5) at Seahawks: The Seahawks always seem to play crazy, memorable, close games in primetime. Five points feels like an oddly high spread for a Saints team on the road that really isn't that good.