Week 7 NFL picks: Rounding up the experts' predictions for Eagles vs. Raiders 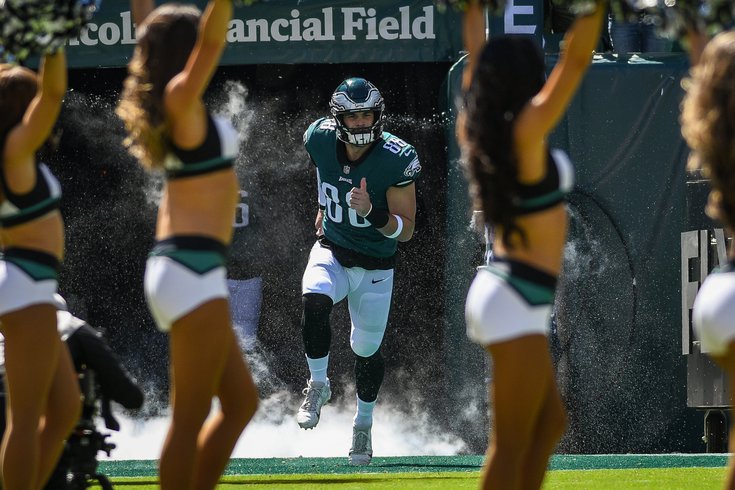 The Eagles will make one of their longest trips of the season this weekend when they head out to Las Vegas to take on the Raiders in the desert. And for the seventh straight week, Nick Sirianni's team will enter the game as an underdog, with the Birds currently getting three points in this one.

So far, the Eagles are 3-3 against the spread, including covers in each of their last two games. But, like Eagles fans, we're not just looking for a cover here. We're trying to pick the game outright — and unlike last week when the Eagles were going up against the defending champion Buccaneers, there's quite a bit more optimism that Philly can go out west and pick up the win.

As we do every week, we've rounded up a slew of predictions from both the local and national media to get a feeling for how the experts see Eagles vs. Raiders playing out — including a few against the spread. Let's dive right in...

• PhillyVoice: Six of our seven writers are picking the Raiders to hold off the Eagles in this one, and yours truly is the only outlier predicting an Eagles' win. Only one other writer even has the Birds covering (even though it's technically a push). That's Evan Macy, who has the Eagles losing by a field goal, 27-24.

I do believe that the Eagles are going to win some more games this season, and I don’t think the Raiders are that much better than Philly is — but going to face them in Vegas fresh off their emotional win last week, I think the Raiders’ momentum will carry them to a competitive victory on Sunday.

It feels like ages since the Eagles last played and they should be fresh coming off their mini-bye week following their Thursday night loss. Lane Johnson and Dallas Goedert are back and the offense should be better on paper to be sure. If they took the time off to reflect, and perhaps make some necessary changes to their scheme and plan of attack, maybe we’ll see a team that looks more like the dynamic offense that burst to a Week 1 win. But I think this team’s growing pains will continue into Week 7 as they’ll falter in a winnable contest. I do believe it will be a game they can build off of, in contrast to a game that makes fans want everyone to be fired and traded.

• Inquirer.com: None of their trio of Eagles beat writers believes Philly will pull off the upset — although they all see a close game. Here's the prediction from Jeff McLane, who sees a 27-23 win for Vegas.

The 2-4 Eagles aren’t as bad as their record suggests, or even as bad as they have looked at times. I truly believe that. The stat nerds do, as well. Football Outsiders have the Eagles ranked 18th, according to their defense-adjusted value over average (DVOA) system. Pro Football Focus has them 16th, according to what nebulous numbers system they use. I just use my eyes and look at their schedule through six games (13th-hardest, per FO) and their remaining schedule (30th easiest) and think it’s got to get better for the Birds. [...]

All that being said, the Eagles in Las Vegas are hard to gamble on (get it?). I think Sirianni and defensive coordinator Jonathan Gannon took their medicine during the mini-bye and will make minor changes to the offense (traditional run calls!) and the defense (aggression!). But they can’t do much in terms of personnel and they’re just going to have to bite the bullet at certain positions. I see a relatively close game, and possibly a road upset, but all bets are off if the Eagles get off to another sluggish start.

• NJ.com: It's an even split over at NJ.com, with three of their football writers taking the Eagles and three going with the Raiders. Interestingly enough, both of the Eagles beat writers picked the Birds in this one, including Mike Kaye, who sees a 26-23 win for Philly.

The Eagles need to take the load off Jalen Hurts’ plate as a passer. It’s time to focus more on designed runs for the quarterback and the running back duo of Miles Sanders and Kenny Gainwell.

The Raiders are the 25th-ranked run defense in the league heading into Week 7 and the Eagles should look to exploit their defense’s mediocrity in that regard. With the running game setting the tone early, the Eagles should be able to attack the Raiders’ secondary down the stretch.

This won’t be a high-scoring game, and the Eagles will need to adjust their play-calling a bit, but this feels like an upset win in the making.

• Bleeding Green Nation: A slight Raiders lean from the BGN staff, with four of their seven writers picking Vegas to beat the Eagles.

• The Athletic: Both Zach Berman and Bo Wulf think the Eagles will pull off the upset this week. Here's more from Berman, who sees a 26-24 win for the Birds...

Even at 2-4, the Eagles are better than the 1-5 I expected them to be through six games. The schedule softens during these next few weeks. The Raiders might be 4-2, but they’re below the Eagles in DVOA and will give the Eagles a better sense of where they are than games against the Cowboys, Chiefs and Buccaneers. The extra time to prepare should be a good reset for this coaching staff. My guess is a big story from this game will be the Eagles fans visiting Las Vegas for the weekend. If the defensive line can pressure Carr, Jonathan Gannon’s group will keep the points down. It’s incumbent upon the offense to improve. I’m more skeptical there. They won’t solve their problems Sunday, but they’ll be more efficient and have fewer three and outs. The Eagles won’t need to win this game in the 30s. I’ll keep going back to the prediction of a big game from DeVonta Smith. A healthy Goedert should make a difference on third downs. Philadelphia will do just enough to win this game, and there will be Eagles chants keeping fans awake on the red-eyes home from Vegas.

The Eagles should match up well with the Raiders. Unlike the Broncos a week ago, Philadelphia's pass rush can take advantage of Las Vegas' Achilles' heel up front. And the return of Lane Johnson improves both tackle spots with Jordan Mailata sliding back to the left side, giving the Eagles a chance to mitigate the for real for real Raiders pass rush. The quarterbacks are not remotely even in this game, but the Eagles aren't as bad as their 2-4 record indicates and the Raiders probably aren't quite as good as their 4-2. Call it a hunch, but in a coin flip game, I'll take a more rested Philly team against a Vegas squad coming off the high of its best game of the season.

• ESPN: Just one of their 10 experts is taking the Eagles. And for the third straight week, it's the same person.

The Eagles are rested after playing on a Thursday, while the Raiders are coming off a victory in their first game without Jon Gruden. They played well on both sides of the ball in that game. But I think the Eagles will be able to hang around in this one. It's close, and both teams will score a bunch.

• CBS Sports: Just two of their eight experts see an Eagles' win on Sunday, and just three think the Eagles will even cover the spread.

• ProFootballTalk: Both Mike Florio and Michael David Smith think the Eagles lose on Sunday. Here's more from Florio, who sees a final of Raiders 24, Eagles 20.

Chris Simms has said that, when playing for Jon Gruden, games were easier than practices because Simms didn’t have to constantly listen to Gruden. Maybe that theory applies to Derek Carr, too, when it comes to no longer having to listen to Gruden during practices or games.

• USA TODAY Sports: Just one of their seven writers are picking the Eagles.

We're here to announce the the most likely result of Sunday's battle between the Philadelphia Eagles and Las Vegas Raiders is a three-point Las Vegas victory at home.

Fittingly, the gang is deadlocked with the Raiders laying a field goal. You're welcome to scroll to the next game, but let's at least share arguments from both sides of the aisle.

Kenyon on the Raiders: "The Jalen Hurts experiment is going downhill fast. It doesn't show any signs of slowing down coming off a game in which Hurts completed only 46 percent of his passes and the Eagles offense mustered a mere 213 yards at home against the Buccaneers. This week, they travel across three time zones to face the 4-2 Raiders. Derek Carr looks back to being the quarterback who started to get some MVP buzz prior to suffering a broken fibula in 2016. Raiders cover at home."

Gagnon on the Eagles: "I don't believe in either team, but I do feel the Raiders' coaching mess will eventually catch up to them even though it didn't in Week 6. Even with Jon Gruden, the Raiders laid a complete egg against the Bears in their last home game, and the Eagles will have stalwart right tackle Lane Johnson back for this one. Plus, it isn't as though the Eagles were humiliated by a dominant Bucs team last week, and they're on extra rest for this one. It's a toss-up, so I'll take the three points."

• Sheil Kapadia, The Athletic: Sheil picks games against the spread every week, and this week he thinks Vegas not only beats the Eagles but covers the three-point spread as well.

This game will likely come down to two things:

It’s possible that the Eagles’ offensive coaches found some solutions to help Jalen Hurts during their mini bye. But I need to see it to believe it. This one just comes down to trusting the Raiders’ offense more.

The Raiders beat Denver in Week 6, and they continue to be an up-and-down in the AFC West. Same goes for Philadelphia, who has played tough against some of the NFL's best teams. Jalen Hurts seals this upset with the game-winning drive.

The Eagles came through as our Week 5 upset special. The Raiders did the same in Week 6. So it's only natural to involve both of the teams here in this space this week. You can bet Philly fans will storm Las Vegas and make it feel like a home game for Jalen Hurts. The Raiders will continue to play liberated, inspiring ball without Jon Gruden, but the Eagles' defensive looks won't help Derek Carr, who will face plenty of interior pressure. The Raiders will struggle with Hurts' mobility and his diverse weapons in the ideal pass-happy attack against them.