Report: Eagles are talking to Texans about a Deshaun Watson trade again 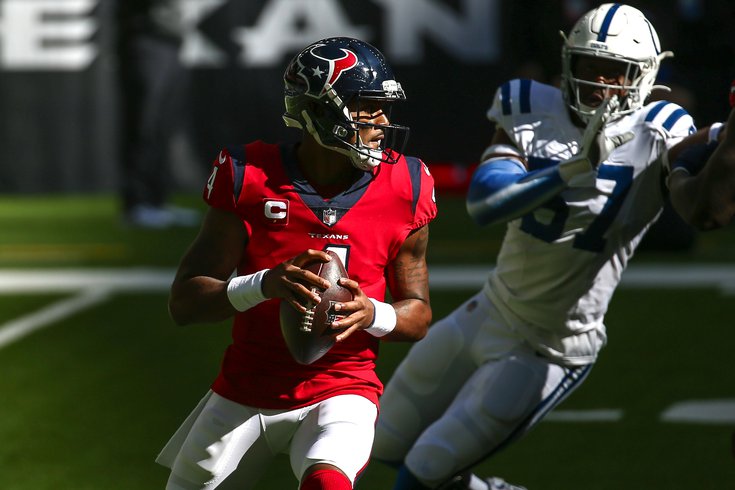 It's only been three weeks since the Eagles last popped up in reports linking them to troubled Houston Texans quarterback Deshaun Watson, who has not played this season while he faces nearly two dozen accusations of sexual assault, most of which are currently playing out in civil court although a criminal case could still be brought.

Throughout the entire process — while the NFL waits to see how the cases play out before waiting to make a decision on Watson's future in the league — the Eagles have been among the team's linked to the 26-year-old passer. And while there are plenty of reasons — 22 of them, in fact — for the Eagles to stay as far away from Watson as possible, there are also reasons why their name continues to pop up in trade rumors and reports.

For starters, they have the trade chips to get it done. They are also uncertain at the QB position while they give Jalen Hurts a one-year audition with three potential first-round picks burning a hole in their pocket. And they have an owner in Jeffrey Lurie who has shown a willingness to give players, even at the game's most important position, a second chance even if it comes as a distraction to the team.

For those reasons alone, the Eagles make sense.

And then there's general manager Howie Roseman, who somehow manages to have his team's name appear in nearly every trade rumor. It's part of the way he operates, making calls on everyone whether there's a significant level of interest or not. In part because, what can it hurt? But also because if you're in on everyone, you're also in on no one. And that makes it difficult for rival GMs to get a true read on which players Roseman is really after. It may be infuriating to fans — or thrilling, depending on how you view never-ending trade rumors — but it's a solid approach to the job. He may have deficiencies in talent evaluation, but this is one area in which Roseman excels.

And that brings us back to Deshaun Watson nearly a month after it was (again) reported that the Eagles were out of the running for the Texans QB. Why? Not because of the sexual assualt allegations. No. In fact, it had nothing to do with the Eagles' motives. It was instead because Watson wouldn't be willing to waive his no-trade clause to come to Philly as he reportedly has no interest in joining the Eagles. Despite that, the Birds are once again popping up as a team in contact with the Texans regarding Watson, who could be traded as early as this week with the Nov. 2 trade deadline rapidly approaching.

First, more on when a trade could get done from John McClain of The Houston Chronicle, who doesn't mention the Eagles and seems to believe it's Miami who will ultimately acquire Watson.

The Texans could finally be getting closer to trading quarterback Deshaun Watson to the Miami Dolphins — a team they play Nov. 7. Even though the NFL trading deadline isn’t until Nov. 2, a deal could go down this week, according to people familiar with the negotiations.If the Texans and Dolphins are unable to consummate the trade this week, they want to get it done by the league’s deadline. The Dolphins have been talking to the Texans about Watson off and on for months, and those talks have intensified into serious negotiations. After losing to Jacksonville in London — their fifth consecutive loss — the Dolphins seem more determined to finally execute the Watson trade.  [houstonchronicle.com]

That tracks with what's been reported in recent weeks, that the Dolphins, with struggling second-year passer Tua Tagovailoa, are the most likely landing spot for Watson — and it would have a ripple effect for the Eagles beyond them not being the team to land Watson, given that the Eagles possess Miami's first-round pick in 2022.

But there's more on the Eagles when it comes to the Watson sweepstakes, as The Athletic doesn't seem as certain as The Houston Chronicle that a Watson-to-Miami deal is imminent.

The Houston Chronicle first reported on Wednesday that a trade for Watson could be coming this week. The Texans have been asking teams for three first-round draft picks and two or three more assets, including a collection of picks or players, according to a source.

In addition to the Dolphins, the Texans have had recent discussions with the Carolina Panthers and Philadelphia Eagles, according to sources. However, the seriousness of those discussions — ranging from a casual conversation to actual trade negotiations — hasn’t been disclosed.  [theathletic.com]

That's interesting since it's twice been reported that Watson is not coming to the Eagles. First, there was the report that Watson wouldn't waive his no-trade clause to come to Philly. Then, following a report late last month that the Eagles were still in the mix despite that — which still made it seem like the interest was on Philly's end — FOX's Jay Glazer reported that the Birds were "not in the in the mix this time."

Could something have changed in the last three weeks? Do the Eagles feel even less confident in Hurts after seeing a few more starts? Is this just Roseman sniffing around to see what he can get? Or could this just be the Texans trying to use the Eagles — a team we've already established as "always involved" — as leverage to get more out of Miami?

The answer to any of those questions could be yes.

While plenty of Eagles fans would be happy for an upgrade at quarterback, just as many probably want nothing to do with one who has over 20 sexual assault allegations against him, no matter how talented he is on the field. And given that Watson reportedly has no interest in the Eagles — while the Eagles seem to have at least some in him — it appears like the QB's no-trade clause might actually save Roseman from himself in this case and keep Watson out of Philly.

Still, this latest report suggests the window is at least a little cracked...