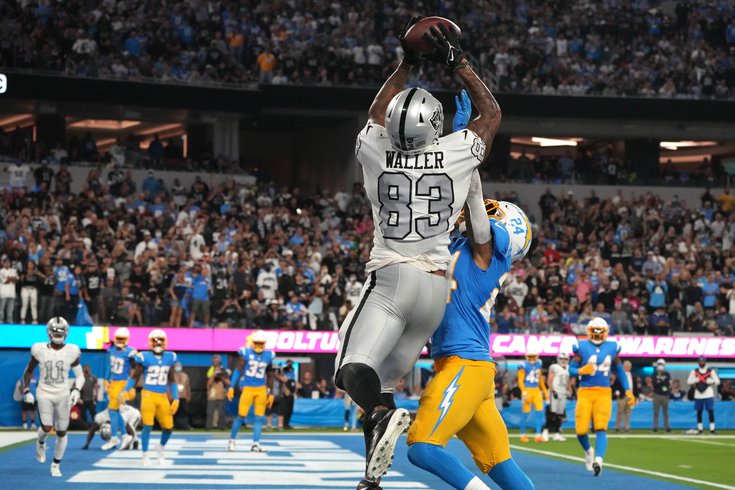 The Philadelphia Eagles will face something of an unfamiliar opponent on Sunday in the Las Vegas Raiders, a talented team, but one dealing with major off field distractions. Here are our five matchups to watch.

The Raiders have an underrated group of skill position players in the passing game, all with varying skill sets.

• Bryan Edwards is the Raiders' other second-year WR. Like Ruggs, he's a downfield target, but bigger and not as fast. Edwards has 15 catches for 303 yards (20.2 YPC).

• Hunter Renfrow is their high efficiency, chain-moving slot receiver who runs outstanding routes. He has 31 catches for 331 yards and 2 TDs.

That group is led by Derek Carr, who is averaging 8.4 yards per pass attempt, and who is second in the NFL behind only Tom Brady with 1,946 passing yards.

The Raiders as a team lead the NFL with 32 pass plays of over 20+ yards. They are explosive. The Eagles, meanwhile, have allowed the second-fewest pass plays of 20+ yards in the NFL, with only 11. Something has to give.

Against the Cowboys, Chiefs, and Buccaneers, quarterbacks like Dak Prescott, Patrick Mahomes, and Tom Brady simply took what the Eagles were giving them in the short-to-intermediate areas of the field. It will be interesting to see if the Raiders can alter their big play approach and settle for what the Eagles seem willing to concede underneath.

2) The Raiders' underwhelming rushing attack vs. the Eagles' run defense

The Raiders' top three rushers are all averaging under 4 yards per carry in 2021:

The Eagles should be happy anytime the Raiders run the ball.

3) Where could the Eagles' defensive line go feastin'?

If you're a regular reader, you already know that we point out the holes on the opposing team's offensive line each week. After facing a Buccaneers line with no significant weaknesses, the Eagles will face a Raiders offensive line with plenty of troublesome spots.

In Week 6, the Raiders' starting offensive line looked like so:

The Raiders made wholesale changes along their offensive line this offseason, trading C Rodney Hudson to the Cardinals, RG Gabe Jackson to the Seahawks, and RT Trent Brown to the Patriots. Their starting LG, Richie Incognito, played one game after recovering from a a surgically repaired Achilles tear suffered last season, before injuring his calf and landing right back on IR. The only starter carrying over from last year is LT Kolton Miller.

I don't normally like to use ProFootballFocus' grades, but since I still have a lot of stuff to write this week and don't have the time to watch six games of Raiders O-line play, we'll go the lazy route and let them do the heavy lifting here:

The Raiders' poor offensive line play probably explains their running backs rushing for just 3.4 yards per carry so far this season, and their bottom quarter of the league 17 sacks allowed.

So to answer the question of which Eagles defensive linemen will go feastin' on Sunday, it should be all of them, as the Raiders' offensive line is the clear and obvious biggest weakness on their roster.

4) Maxx Crosby and Yannick Ngakoue vs. the Eagles' OTs

For the third week in a row, the Eagles will face a quality pair of edge rushers. This week it's Crosby and Ngakoue.

Crosby is tied for 11th in the NFL with 5 sacks, 3 of which came last Sunday against the Broncos. You can see his disruption from that game here:

No. 98's best plays from Denver. (via @NFL) pic.twitter.com/G9Qa0lTtwO

Meanwhile, Ngakoue is pretty good, too, and a name that was linked to the Eagles once upon a time. He's on his fourth team in four years, and his production has suffered as a result of that instability, but he is still a very talented edge rusher.

Along the Eagles' offensive line, Lane Johnson returned to the team this week, but his status for Sunday remains uncertain. He was a limited participant in practice on Wednesday. If Johnson isn't ready to return to the lineup, then it'll be Andre Dillard at LT and Jordan Mailata at RT once again, which is combination that should still be concerning.

If Johnson returns, which I believe is likely, then Mailata would move back to LT, and Dillard will head back to the bench. But Johnson will have his hands full in his return with the disruptive Crosby.

5) Nick Sirianni vs. his hatred of running the ball

The Raiders are allowing 4.6 yards per carry (25th in the NFL). Only one team has allowed more runs of 20+ yards, and only four teams have allowed more rushing touchdowns.

Nobody is asking Sirianni to pound Miles Sanders and Kenny Gainwell into the line all day like they're Derrick Henry, but maybe for one week he can remember that they do exist, and that running it occasionally might help his struggling quarterback.

The Raiders have one of the lightest defensive fronts in the NFL:

That would be an average weight of 268 pounds. Assuming Johnson returns to the lineup, the average weight of Eagles' offensive line is 326 pounds, and they are all athletic enough individually to execute any type of run block.

If we hear that "RPO's are runs too" foofy nonsense after this game, it will have been a failure in game planning, in my opinion. Sometimes football doesn't have to be complicated. Just line up and move this light Raiders defensive front off the line scrimmage against their will with your much bigger and stronger linemen. It's not sexy, but a lot of teams around the league have success when they're physical at the line of scrimmage.

Again, nobody is saying that Sanders and Gainwell need to get 30 carries between them. But maybe like, 15 real runs against a defense ill-equipped to stop the run? Is that asking too much?