Week 7 NFL odds: Point spread and total for every game, including Eagles at Raiders 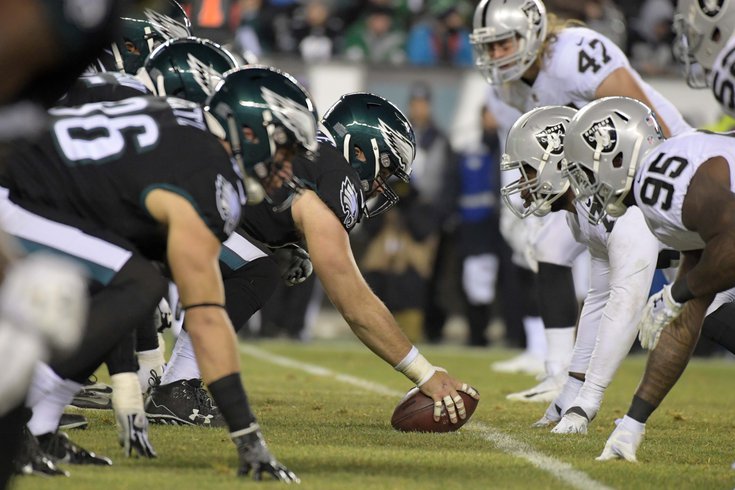 The last time the Eagles played the Raiders was Christmas night back in 2017, when Philly was still searching for its first Super Bowl and the Raiders played in Oakland.

We've got another weekend of NFL games under our belts, and the league landscape is beginning to come into focus with certain teams beginning to separate themselves from the pack and show they're true contenders while other continue to fade further and further into the distance.

Week 6 brought our first round of byes — and while they'll continue in Week 7 with six teams getting the week off, we'll now get our first week of teams coming off byes, something that's always a factor worth considering when betting on a game. Beyond that, there are a lot of big spreads this week, far more than there have been in recent weeks, which is against a factor of the NFL's haves and have-nots beginning to move further to their respective ends of the spectrum. As we do every week, let's take a look at those early Week 7 odds from around the NFL, including Sunday's Eagles vs. Raiders matchup in Las Vegas...

A pair of .500 teams will face off on a short week, as the Browns will host the Broncos likely without their top two running backs. Nick Chubb could return for Cleveland in this one, but they will definitely be without his backup, Kareem Hunt, who went down with a calf injury that will likely land him on IR. And to top it all off, Baker Mayfield will continue to play through a dislocated shoulder. After starting the season off 3-1, the Browns lost two straight (albeit to good teams in the Chargers and Cardinals) and will look to get back to their winning ways against a Broncos team that has lost three straight after a 3-0 start. One of these losing streaks is ending on Thursday night.

This one's an AFC North battle featuring the two teams at the top of the division. With an upset win, Joe Burrow and the Bengals will find themselves in first place in a tough division in which many thought they would finish last. All four teams are currently .500 or better — one of just two divisions in football that can claim that. But in order for Cincy to take over that top spot, they'll need to knock off a Ravens team that is nearly a touchdown favorite and has rattled off five straight wins of their own.

There are more touchdown-plus spreads this week than we've seen in recent weeks — wait until we get to the late afternoon games — but this one certainly feels deserved. Taylor Heinicke has been a good story for Washington, making the most of his audition in Ryan Fitzpatrick's absence, but we saw on Sunday what happens when his team runs up against a decent opponent. Both the Bills and more recently the Chiefs lit up Washington, and Aaron Rodgers and the Packers could be next on the list as they look to win their fifth game in a row as well, just like Ravens (and Cowboys, who get this weekend off). Only the 6-0 Cardinals have a longer current winning streak.

The last-place team in the AFC South meets the last-place team in the AFC East, and it's easy to see why Atlanta is the favorite on Sunday despite going on the road — at least that's the case if you watched any of Tua Tagovailoa's return to action in Week 6 against the lowly Jaguars, who picked up their first win in the last fourteen years on Sunday.

How bad are the Jets? Well, they're a touchdown underdog on Sunday against a team only has a pair of wins, both coming over two of the worst teams in football, the Texans and... the New York Jets. Perhaps that's more the reason the 1-4 Jets are considerable underdogs as they come off their bye week — they played the Patriots at home already this season, and the results were disastrous, a 25-6 loss back in Week 2. There aren't many reasons to think this time around is going to be much different. Then again, this Pats team did lose at home to the Dolphins.

This is one of the closest spreads of the week, but neither this game nor the other 2.5-point spread (Falcons-Dolphins) feel very watchable. Also, how are the Panthers not bigger favorites here? The Giants are decimated by injury and look done.

The Chiefs are in last place in their own division, something no one really expected after the first six weeks of the season. The Titans meanwhile, are still in first place in the AFC South following their thrilling win over the Bills on Monday night, but still find themselves 4.5-point dogs against a last-place team. That tends to happen when that last-place team is the two-time defending AFC champs.

The Raiders surprised a lot of people when they weathered the storm that engulfed their franchise and led to the firing of their coach last week by going out and beating the Broncos on Sunday. Not only did they beat them, they beat them handedly. That actually happens more often than you'd expect when a team goes through something like this, where they rally around one another and go win in spite of whatever their particular distraction is. You know what typically happens the next week? I'm not about to predict an Eagles win just yet — you'll have to wait for my prediction later on in the week — but don't be surprised if the Raiders come out flat this week and give the Eagles an opportunity to steal on in the desert.

That Eagles-Raiders game, at least according to oddsmakers, might be the only watchable one of the late afternoon slate, which each of the other three being two-touchdown spreads or more. We start with the winless Lions heading into L.A. as 15.5-point dogs to face a Rams team that has just one loss this season — to the currently undefeated Cardinals. Are 15.5 points enough?

Speaking of those 6-0 Cardinals, we come to out matchup with the biggest spread of the week. Houston has lost five straight after winning the opener — which came against the Jags so let's not give them too much credit. Arizona has been rolling and this doesn't seem to be a particularly worrisome test. That being said, spreads this large always scare me. A final of 31-14 sounds like a blowout, but guess what, it's not a cover.

The 3-3 Bears might not be as mediocre as their record suggests. I admittedly haven't watched a ton of them because they often play at the same time as the Eagles, but they do have wins over the Bengals and Raiders (plus the Lions) and their losses have all come against good teams, like the Rams and Browns on the road and most recently on Sunday to the Packers at home. Still, the Bucs are the defending champs, have the best QB to ever play the game, and have had a long week to rest and prepare. Oh, and they're playing at home.

Carson Wentz gets another primetime performance after his team gave up a big lead two weeks ago on a MNF loss to the Ravens. After a win on Sunday over the Texans, they'll travel to California to visit the 2-3 49ers, who will be coming off a bye week following three straight losses. The good news for the Niners? They should be getting Jimmy Garoppolo back for this one.

Russell Wilson remains out for Seattle, who will have to take on a Saints team coming off a bye and getting an extra day on top of that. New Orleans does have some bad losses on its schedule, including at home to the lowly Giants and a 19-point loss to the Panthers, but they should be well rested and prepared for a Geno Smith-led Seahawks team.