The Philadelphia Eagles were idle on Sunday, after dropping a Thursday night home game to the reigning champion Tampa Bay Buccaneers. As such, Eagles fans weren't subjected to Eagles football, and could merely watch the rest of the NFL's slate of games, stress-free.

Around the league, there were some good results for the Eagles, and some bad ones. After six weeks of the 2021 NFL season, the Eagles' place within the NFC hierarchy is becoming clearer.

Let's start with the bad.

The Cowboys found a way to win in overtime on the road in New England on a day in which they didn't have their "A-game." At 5-1, they are running away with the NFC East, as they have at least a three-game advantage over every other team in the division.

FiveThirtyEight.com has the Cowboys as 88 percent likely to win the division. That feels like a low projection. This is not 2019 or 2020, when you could be bad for the better part of the season, and an NFC East title was always still within reach. The Cowboys have a legitimately good team in 2021, and could realistically have the division wrapped up by Thanksgiving.

Otherwise, if you take out the division leaders — the Cardinals, Packers, Buccaneers, and Cowboys — the Eagles are ninth in the wildcard hunt.

If you're an optimist, you might make the point that the Eagles are only one game out of the race for the third wildcard spot, with a bunch of crappy opponents on the horizon. You might also be of the belief that the experience of making the playoffs — even if only to get stomped in the first round of the playoffs by the No. 2 seed — would be better than maximizing the value of team's own first round pick in the 2022 NFL Draft.

If you're a pessimist and/or a realist, it's pretty easy to identify this this team can't hang with the top 5 teams — the Cardinals, Packers, Buccaneers, Cowboys, and Rams — in the NFC.

After Howie Roseman traded Zach Ertz to the 6-0 Cardinals, he was asked if other older players might be dealt at the trade deadline if the season continues to go south.

"I don't view us as being sellers," Roseman said. "I view us as still having an opportunity in the next 11 games to show what kind of team we are."

Certainly, Roseman wasn't going to answer that question by saying, "Yep, this season is toast. It's fire sale time." That's a message that would not be received well by the players, especially with 11 games to go, and would do nothing to preserve the illusion of leverage to other teams potentially interested in available players.

The Eagles have a very small number of good, older players that don't have bad or immovable contracts, so the Eagles can't be heavy sellers, but they should very clearly be willing to explore trading off aging and/or underutilized players to further bolster their draft capital.

And now, the good.

With the Miami Dolphins' loss to the the previously winless Jacksonville Jaguars on Sunday, the Eagles — who own the Dolphins' first-round pick in the 2022 NFL Draft — may have themselves an extremely valuable asset.

The Dolphins have looked like one of the worst teams in the NFL through the first six weeks of the season, and they were lifeless at times against Jacksonville, who had lost 20 straight games heading into that matchup. That Dolphins pick is looking very likely to land in the top 5 of the 2022 NFL Draft, and it's not out of the question that it could be as high as No. 1 overall.

Meanwhile, as you're no doubt aware, the Eagles also own the Colts' second round pick in the 2022 draft, which can become a first-round pick if Carson Wentz either plays 75 percent of the Colts' offensive snaps, or he plays 70 percent of their snaps and they make the playoffs.

To date, the injury-prone Wentz has only missed five snaps the entire season, and the Colts have been slow getting out of the gates this season, starting 2-4. For the Eagles' purposes, the Colts are right in the sweet spot of mostly looking bad so far this season, while also staying in the hunt in the AFC South, because their biggest competition  — the Tennessee Titans — have not yet pulled away from them.

Because Wentz has played reasonably well enough, and because the Colts are still in the hunt despite their 2-4 record, the likelihood that the Colts will pull Wentz at some point in order to preserve their first round pick feels low.

If the season ended today (it doesn't), the Eagles would own the third, eighth, and ninth overall picks in the 2022 NFL Draft. Via Tankathon: 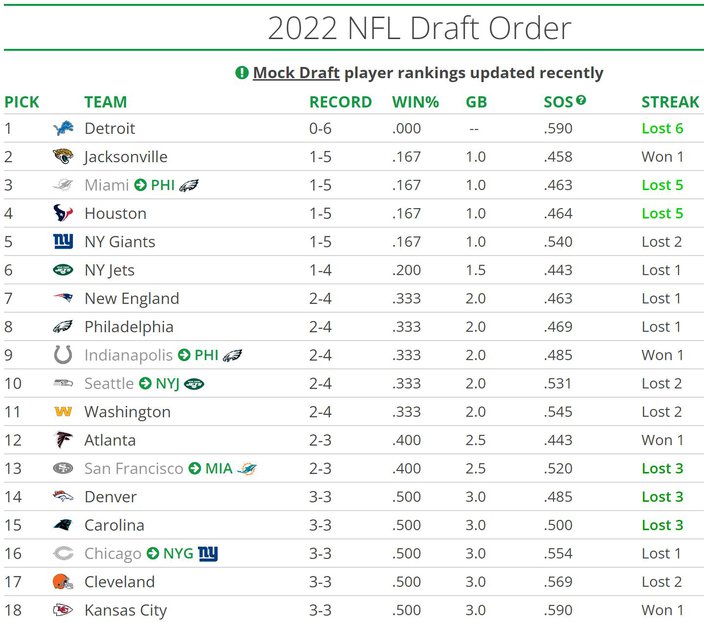 There's a long way to go in the 2021 season, but the Eagles would have all sorts of opportunities in the 2022 NFL Draft — whether that be trading up, trading back, trading for established players, or "sticking and picking" — if they had three picks land in the top half of the first round.

The 2021 season could be frustrating to watch the rest of the way, because of what we sort of already knew this roster to be, which is old, expensive, and not very good. But the potential for a promising future lies ahead.