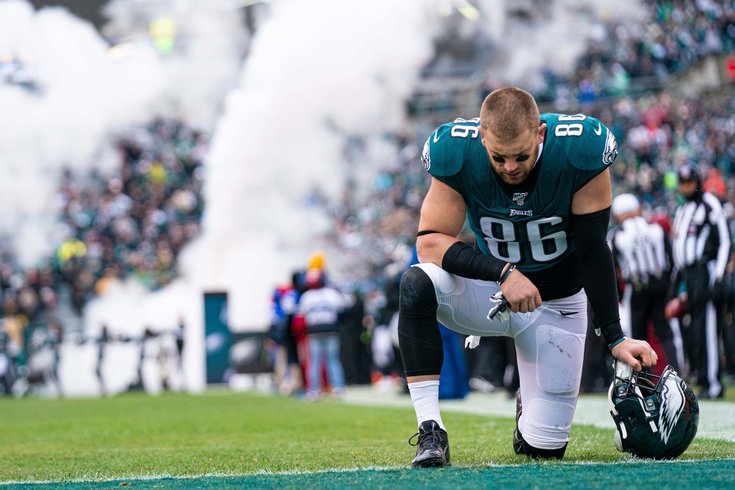 It seemed all but certain this offseason that Zach Ertz was no longer going to be a tight end anymore for the Philadelphia Eagles, but Ertz unexpectedly remained on the roster through the first six games of the season. On Friday, Ertz was finally dealt, to the Arizona Cardinals, for a fifth-round pick and CB Tay Gowan, who was a sixth-round pick of the Cardinals in the 2021 NFL Draft.

Ertz will go down as perhaps the best tight end in Eagles history, as he racked up 579 receptions for 6,267 yards and 38 TDs over eight-plus seasons in Philly. His career numbers:

Here is where Ertz ranks in franchise history in receptions, receiving yards, and receiving TDs.

But perhaps more than his regular season numbers, Ertz will be known for plays he made in the Eagles' lone Super Bowl championship, as Nick Foles looked Ertz's way in a pair of crucial situations. The first was on fourth down on the Eagles' go-ahead drive in the fourth quarter. The second was the lead-changing score on that same drive. In that game, he caught seven passes for 67 yards, and his clutch TD. A highlight reel:

Ertz led the Eagles in receiving in four of the five years during the Doug Pederson-Carson Wentz era. The exception was 2020, when Ertz missed five games and produced career lows in receptions (36), yards (335), yards per catch (9.3), yards per target (4.7), and TDs (1). He also had five drops, for a drop percentage of 12.2 percent, the worst of his career.

While the Eagles' offense was disjointed just generally speaking, Ertz still unquestionably underperformed relative to the standards he had set over the bulk of his career as an Eagle. In 2021, he was seeking to prove that 2020 was a one-year aberration, and not some sort of evidence that he is in decline. The reality probably lies somewhere in between, as he was more effective — but still not the same player he once was — in six games in 2021.

Ertz was emotional after the Eagles' Thursday night loss to the Buccaneers, seemingly aware that he had just played his last game as an Eagle.

Zach Ertz very emotional as he enters the lockeroom pic.twitter.com/vemnkBihXs

A fifth-round pick and a depth corner is reasonable compensation for Ertz, who will turn 31 in November, and who is in the final year of his contract. The Eagles will also shed the unpaid portion of his $8.5 million salary.

With Ertz moving on, Dallas Goedert will be the unquestioned starting tight end. Goedert is also in the final year of his contract, but is now more likely to sign a contract extension in Philadelphia.

Ertz and the Cardinals could be a good match, as Arizona lost starting TE Maxx Williams to a season-ending knee injury last week. In five games, Williams had 16 catches on 17 targets for 193 yards and a TD. No other tight end has caught a pass for the Cardinals this season. With a record of 5-0, the Cards were in a position to be buyers, and tight end was a glaring need.