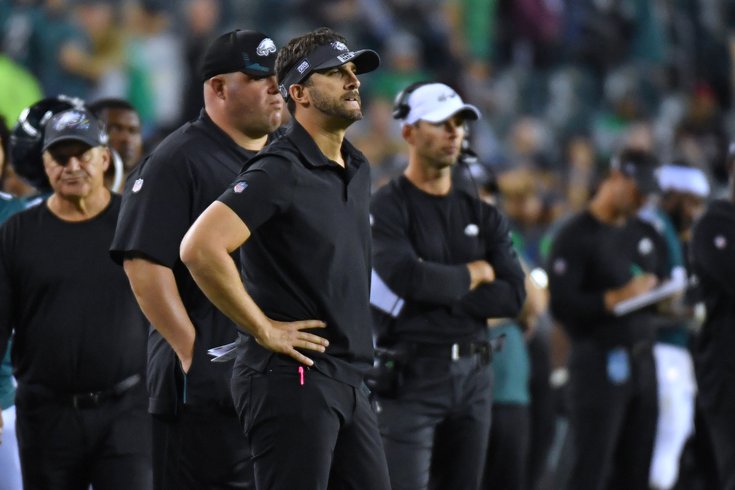 Every NFL pressbox has a seating chart and mixed in among the reporters and team personnel is a group of advanced scouts getting a first-hand look at an upcoming opponent.

For the Eagles that meant teams like Las Vegas and Detroit were on hand to get up-close and personal with Philadelphia's personnel during a 28-22 setback to the reigning Super Bowl champion Tampa Bay Buccaneers on Thursday night.

When it comes to Jalen Hurts, I was half-expecting a member of The Groundlings or Second City to head to South Philadelphia to take a look at the Eagles' quarterback.

For those of you who aren’t fans of sketch comedy or “Saturday Night Live,” the Los Angeles-based Groundlings and the Chicago-housed Second City are the schools when it comes to improvisation — and improv happens to be the staple of Hurts’ game right now as a second-year signal-caller fresh off his 10th professional start.

Hurts wasn’t very good against the Bucs' 32nd-ranked pass defense, which was down its two typical starting cornerbacks coming in and then lost Richard Sherman to a hamstring injury early in the night. Despite those positive signs, Hurts finished 12-of-26 for a paltry 115 yards with a touchdown and an interception with a dismal 55.8 pass rating. The running aspect of his dual-threat ability was much better with 44 yards on 10 carries and two scores.

Bucs coach Bruce Arians wasn’t pulling any punches when it came to the young quarterback.

"They popped a couple runs late when we were playing pass-defense," said the once-upon-a-time Temple coach. "Just [Hurts] traveling, him getting out of the pocket, improvising. I liked the way we handled all the design plays, [it's] those improvised plays that are tough."

The improvised plays are tough and for the second time in four days, Hurts was able to do just enough to put the Eagles in shouting distance late in the game they shouldn't have been in because of a poor offensive performances overall.

Against Carolina this past Sunday, it was enough. When the competition ticked up to Tom Brady and Co., it was not.

For Eagles coach Nick Sirianni, Hurts’ improv skills are a luxury but he wants those skills to be secondary to a more classically-trained approach.

Think of it as an improv class helping a trained actor get that much better at his craft.

In Sirianni’s mind, you can’t build a consistent offense on the foundation of something that by its very nature is inconsistent.

"Yeah, definitely," Sirianni answered when asked by PhillyVoice if the Eagles' offense is too reliant on Hurts' impromptu abilities right now. "Again, that's what we're talking about with we want to be able to make some plays in the pocket, and there are too many of those.

"We're trying get it down from whatever percentage it is. We want to get into that 35%, 40% area of unscripted plays. I'm definitely thinking tonight we were higher than that, and that's got to change."

"That’s got to change" is a pretty strong stance from a rookie mentor taking a lot of hits to his reputation for trying to mask the pocket deficiencies of an inexperienced QB.

Sirianni likely also understands how difficult it is to hang your hat on an offense at this level based solely on RPOs, bubble screens, slip screens, swing passes, and the occasional deep shot.

That's because it only gets tougher from here. Bucs defensive coordinator Todd Bowles laid bare a blueprint for the rest of the league when it comes to blitzing Hurts. The athletic trigger man might escape the sack as he did often on Thursday, but too often the possibilities of the play from a progression standpoint are over as long as you have an athletic linebacker spying Hurts as the Bucs had with Devin White.

"You look at this game and this past game that we played in and we started off slow. This whole year, we kind of shot ourselves in the foot and we know, and we believe. I have unwavering faith in the guys on this football team and everybody on this field and that we have everything we need."

For the first time, you get a distinct feeling that Sirianni doesn’t agree.

"We just need to hone in on being able to make some throws in the pocket first and then be able to escape," Sirianni admitted. "So, we’re always going to be talking about that with Jalen. ... He did a good job of escaping and making some plays. But, again, we're always going to be thinking about how do we get him to be the passer first and then the secondary part of it to be the runner."