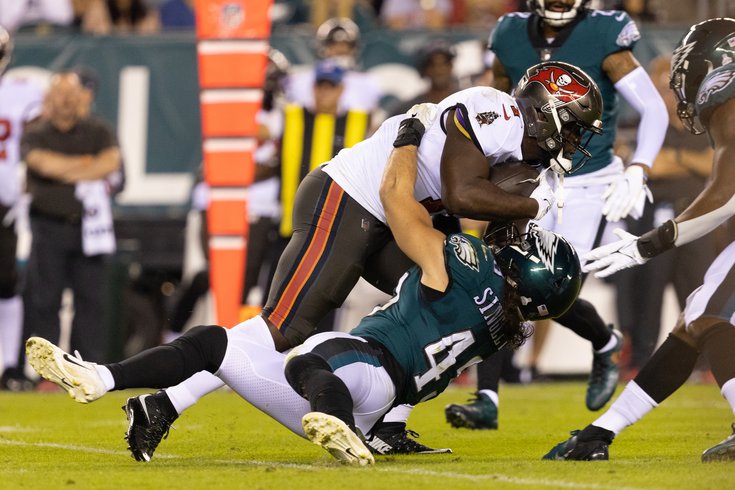 The Eagles made it interesting in the second half, but Tampa Bay emerged victorious in the end, outlasting Philadelphia 28-22. Improvement in the second half was not enough to pull another one out of the fire.

• Can you put a drive in the good that relies on a pass interference call to do most of the heavy lifting? That's the question you have to answer for yourself about both of Philadelphia's touchdown drives on Thursday night. In the end, Philadelphia was able to punch it into the endzone on a fourth-down run from Jalen Hurts, so you call this possession a win no matter what it took to get there:

I felt bad for the poor security guy on this one, who did nothing to earn Hurts' scorn, for the record.

• On the odd occasion where he was able to get the ball, Miles Sanders looked pretty good in spite of how good Tampa is up front. Perhaps you could use this as a reason to give him the ball more each week, but I'm admittedly not an NFL head coach.

In a case of too little, too late, the offense finally came to life as soon as Sanders took on a sizable role within the offense. You don't normally expect a team trailing by multiple scores to get back into it by keeping it on the ground and running clock, but Sanders had fresh legs in the fourth quarter and it showed, with the Penn State product bouncing to the outside and even picking up some tough, physical yards up the middle, bringing the Eagles into scoring territory basically by himself.

Once there, it was up to Hurts to call his own number once again, and in spite of all his issues through the air, Hurts delivered on the ground once again, bringing the Eagles within a touchdown in improbable fashion:

A @JalenHurts flex and it's a one score game! #FlyEaglesFly

Maybe it's not improbable if they're going to do this basically every week. A discussion for another day, I think.

Credit to Hurts for this much — the throw on the two-point conversion to Quez Watkins was right on the money, the second consecutive week where he came up with a big play on the extra point in a critical spot. For all the concerns about the velocity on his throws, he got this one in there when they needed it most:

• The defense had their own issues for most of this game, getting run through like swiss cheese at times, but it did feel like Jonathan Gannon's group held onto the rope and tried to give the offense a chance to climb back into this game. The Bucs looked to be on track for a 40+ point game against the Eagles on Thursday, but the defense was able to put enough pressure on Tom Brady to take Tampa out of rhythm from time to time, so it's hard to get overly worked up about their performance on the night.

Not a lot of guys that I think are worth spotlighting for this group, though. Maybe Avonte Maddox, who made a couple of impact plays and has been putting together a decent season somewhat in the background. But you can't hand out many gold stars given the overall complexion of the game.

• If Nick Sirianni was a perfect (or even above average) play-caller, we'd probably be talking a lot less about Jalen Hurts' limitations as a starting quarterback. But like it or not, those limitations have been on full display this season, and they were again on Thursday night.

The thing that's probably most disheartening at this stage is not his arm or the misses, but his overall awareness in the pocket. Too often, Hurts is standing in a clean pocket and makes the decision to take off anyway, and while there are moments of brilliance when he hits the open field as a runner, they can't come at the cost of surveying the field and looking for one of his playmakers. There are moments, like there have been for many players this season, where you wonder exactly what he's thinking. Good example from Thursday night — Hurts sliding for a one-yard loss while way outside of the pocket instead of simply throwing the ball away. It only makes a yard's difference, but it says a lot about his ability to process the game.

You could chalk that up to inexperience, and I'm receptive to that line of thinking, but it's not like this is the first time Hurts' decision-making has been questioned. And frankly, you could live with questionable awareness and pocket presence if there were plus tools as a thrower to fall back on, but there are question marks there as well. Hurts has to make progression on several different fronts to get into legitimate franchise QB territory. That's not a good place to be in for any prospect.

It's unfair to compare Hurts to the GOAT quarterback, but look at the style of offense Tampa Bay succeeded with on Thursday night. Brady dinked and dunked the Eagles to death, hitting screens and slants and short throws all damn night, succeeding by getting rid of the ball and reading the game quicker than anybody else on the field. For all the consternation about play calls and such, and we'll get there ourselves, you can have a great offense without doing much downfield attacking if your quarterback strikes quick.

He doesn't hit the open man enough, he's often late throwing the ball, he doesn't have great velocity, and so forth. There are other issues for this team, but Hurts isn't living up to his end of the bargain. When you can't hit 100 yards of offense until the fourth quarter, you have a major problem.

• All of that being said about Hurts, Sirianni is simply hanging him out to dry by refusing to run the ball, regardless of how fruitless the task would have been against an elite Bucs front. To invoke the Brady comparison again — in spite of the fact that he is the best ever at his position, the Bucs absolutely hammered the Eagles with early runs all night, as Leonard Fournette made them feel him in the trenches. No one is above being set up

The Eagles don't have a bruising, power back in the style of a Fournette, but you don't need to have a guy like that in order to play power football and benefit from running the ball. I can absolutely understand wanting to attack a porous secondary, but even terrible defenses can come to life if they know what to expect on basically every single play.

We've said this week after week, but the Eagles are getting all of the downsides of hiring a young coaching staff (the team is undisciplined and prone to stupid mistakes) without any of the upsides. This is a group that should be pulling out gadget plays and experimenting and trying to beat teams with creativity and confusion, knowing they're at a talent deficit and that it would be acceptable to try and fail with wacky stuff. We've seen basically none of that. You can't be a vanilla team and predictable on top of that. Sirianni's offense has somehow managed that, which is the biggest indictment of his tenure so far.

What makes it even worse is that Sirianni has had a pretty cowardly approach even as a near-constant underdog week-to-week. Down two touchdowns in the fourth quarter and placed at Tampa's 28-yard-line, Sirianni had the choice to go for it on fourth-and long or to kick it. In spite of the fact that his team had gotten their asses kicked up and down the field most of the night, he opted to try a field goal attempt, and Jake Elliott gave him the reward the choice deserved: a miss to the right. For a guy who has gone out of the way to indicate he's embracing the city and this opportunity, he sure doesn't get how to coach like an underdog. Bruce Arians had more balls on fourth down while up two touchdowns in the fourth quarter!

With each passing week, we get closer to the moment where Hurts throws an interception on a screen pass because the opponent already knows it is coming. There were two separate plays in the second half where the Bucs almost made a house call because of a telegraphed screen pass. And that's an error that will ultimately fall on the coaching staff, who keeps going back to the same dry wells over and over again. They have as much or more to prove than the quarterback the rest of this season.

• I honestly feel a bit bad picking on poor Alex Singleton, who at least got himself into a position to make plays throughout the game, which is more than you could say about the vast majority of his teammates. Unfortunately, his lack of size and talent let him down once he got there, with poor Singleton getting absolutely bulldozed by Fournette most of this game.

On a good team, he's probably a special teams player. This isn't a good team, so he's one of their most "productive" players in the stat book and a constant source of agony as more talented players make him look silly. Not his fault, but a symptom of their very real problems.

• The quarterback decisions and horrible gameplan will give some cover to an offensive line that simply wasn't good enough in their own right. Perhaps finding a way to get Andre Dillard on the field is not worth unsettling the left tackle you paid a ton a money to who looked good in that role prior to getting injured.

• Do the Eagles understand how much easier they'd make it on themselves if they ran a QB sneak when they're inside the one-yard line? It seems like something they should be aware of.

• The no-call pass interference on Quez Watkins in the back of the end zone was absolutely ridiculous. Good example of how NFL officials let good teams get away with murder as it suits them.

If you can contact a guy before the ball gets there, never turn to face the play, and still ultimately get bailed out in the end, there's no reason to have pass interference penalties in the first place.

• Watching Javon Hargrave march to the medical tent was one of the saddest sights in a game full of those. It was a short stay, but they can't deal with basically any more injuries without the wheels falling off.

• You guys know I love to pile on this team for stupid penalties, but the taunting penalty Genard Avery picked up late in the fourth quarter is absolutely ridiculous. Guys not being able to show a little emotion after a big play goes against what makes this sport fun to watch in the first place. Hard to know if it would have ultimately made the difference in the game, but it was a huge call in a big spot and it allowed the officials to have a larger impact on the outcome than they should. That's not what anybody buys a ticket or turns the TV on for.