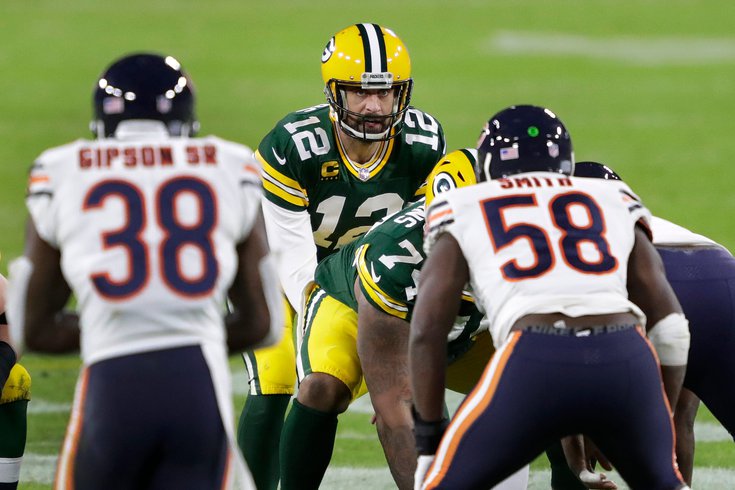 Aaron Rodgers and the Packers face the Bears in Week 6.

For the gambling enthusiasts, here are my Week 6 NFL picks. To note, the team logos indicate who I think will win the game, not cover the spread. At the end of the picks, I'll note a few teams that I like based on the spread — with all lines coming via Sidelines.io.

Buccaneers (-6.5) at Eagles: The Eagles have had to face a pair of the league's elite offenses already this season in the Dallas Cowboys and the Kansas City Chiefs. In those two games, not including kneeldowns, the Birds allowed 11 TDs in just 18 possessions, and the Cowboys and Chiefs made it look easy.

They'll face another elite offense on Thursday night. The Buccaneers employ the best player in NFL history, the best set of wide receivers in the NFL, and a very good offensive line. Unlike the Cowboys and the Chiefs, however, Tampa also has a suffocating run defense.

There are good feelings in Philly once again after the Eagles were able to steal a win on the road against the banged-up Carolina Panthers, but reality will once again set in that the Eagles cannot hang with the best teams in the NFL.

Dolphins (-3.5) at Jaguars: For the second week in a row, the London game (9:30 a.m. EST) is the worst game on the schedule. The Dolphins have the worst point differential in the NFL, at -75, while the Jags are -59. However, it does have meaning to Eagles fans, since the Birds own Miami's first round pick in 2022. If the Dolphins were to lose to the winless Jaguars, it'll be reasonable to start believing that the Dolphins pick could land somewhere in the top 3.

Tua Tagovailoa was bad to start the season before suffering broken ribs against the Bills. Jacoby Brissett replaced him and was worse. Tagovailoa should be back for this game.

Trevor Lawrence is beginning to play better, and the Jags are used to doing this trip overseas. I'll take them, I guess, with no confidence whatsoever.

Packers (-4.5) at Bears: Aaron Rodgers is 20-5 over his career against the Bears, with 55 TDs and 10 INTs. He has also won his last four games against them, all by at least 7 points, and by an average of 12.5 points. I believe that Justin Fields will eventually become a good quarterback, but I don't trust him yet in front of a crap offensive line.

Bengals (-3.5) at Lions: If you're in a survivor pool, I'd be careful about picking teams playing the Lions. They should have a win over the Ravens if not for a missed delay of game call, and they've played other teams very tough this season. And now you have their head coach openly crying after a tough loss because of the great effort his players gave.

I love that Dan Campbell cried for his team. Such a Football Guy. pic.twitter.com/CIcs9Li8bL

They're eventually going to beat a good team and knock out half the survivor pool. Don't go down with those other chumps.

Texans at Colts (-10): I like the Colts as a survivor pool play this week. They're 1-4, and in desperate need to get back in the win column against a bad divisional opponent.

Carson Wentz is never going to be the player he was in 2017 ever again, and he is still showing some glimpses of the bad habits that made him the worst starting quarterback in the NFL in 2020. However, he has at least been functional under Frank Reich, and this Colts roster surrounding him is better than their 1-4 record would indicate. Reich can also remind his players that Indy started 1-5 in 2018, but eventually finished 10-6, and even won a playoff game.

Rams (-9.5) at Giants: It's only Week 6, and the Giants are already dead. They were bad to begin with, but now they're also extremely banged up. They have a couple of starting interior offensive linemen — plus LB Blake Martinez — on IR, and the following players didn't practice on Wednesday:

When the Chiefs were 1-2 and heading into Philly in urgent need of a win, they got one with relative ease, as Patrick Mahomes and the Chiefs' offense dominated. At 2-3 heading into Maryland, I suspect Mahomes will once again easily pick apart what has been a surprisingly awful WFT defense. Add in all the continued off the field distractions that this garbage franchise is involved in, and they're ripe for a blowout loss.

Vikings (-1) at Panthers: I think that most will view this game in terms of the respective availabilities of Christian McCaffrey and Dalvin Cook. To me, this matchup is about the Vikings' awful OL vs. Haasan Reddick and Brian Burns (9.5 combined sacks), and the Panthers' awful OL vs. Danielle Hunter and Everson Griffen (10 combined sacks). I like Kirk Cousins' chances of performing under duress than Sam Darnold, which doesn't say much for Darnold.

Chargers at Ravens (-3): The Chargers and Ravens have both been involved in some wild games this season. This is a possible playoff matchup in the AFC. The Ravens have been a little too erratic this season for my tastes, nearly losing to the Lions and the Colts, while the Chargers have been more consistently good against much better competition. Give me the Bolts.

Cardinals at Browns (-3): Again, like the Chargers and Ravens above, the Cardinals and Browns have played in some crazy games this season. Even though the Cards are the lone remaining undefeated team, I'm not quite ready to buy into them as Super Bowl contenders. This would be a statement game. I don't see it. Give me the Browns.

Raiders at Broncos (-3.5): This will be a fascinating game in terms of how the Raiders' players respond in the wake of Jon Gruden resigning in disgrace this week. I wouldn't be surprised if their season falls apart. We'll see.

Cowboys (-3.5) at Patri*ts: This line feels curiously low, as if it's only 3.5 points because people are still pretending like the Patri*ts are a good football team. They're not. The party is over, and it's worth noting that their home dominance is gone, too. 0-3 at Gillette so far this season, soon to be 0-4.

Seahawks at Steelers (-5.5): The Steelers have gone 17 years without having a losing season. The Seahawks have gone nine. They own the two longest current winning season streaks in the NFL:

years since posting a losing record

With Geno Smith at quarterback for the next couple of months, and a cooked Ben Roethlisberger at the helm for the rest of the Steelers' season, both of those streaks are in serious danger.