Eytan Shander: How the Eagles can beat the Bucs; Simmons drama just getting started 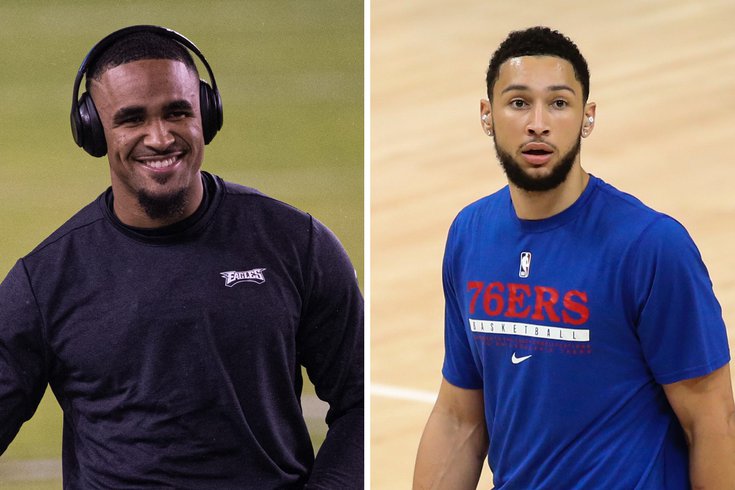 A quick turnaround after the biggest emotional victory in this young Eagles season could spell disaster on Thursday night. The good news is that it’s a home game and Tom Brady hates everything about us and the team we represent. Kind of like Ben Simmons.

As for the Eagles, I was blown away at how composed the offense was in last week’s second half, especially after being the main culprit in the first half. Before this week's game against the Bucs, let’s look at the two most likely scenarios and how they get there – I’ve eliminated the tie if that’s ok with you.

HOW THE EAGLES WIN

Jalen Hurts must be perfect. Maybe close to perfect is better. Yes, the Bucs secondary is putrid, but their front seven (even without Lavonte David) is menacing. It’s just tough to run against this unit, including from the QB position. Make throws and don’t miss any opportunities. He won’t be locked in a shootout right away like with the Chiefs, but you know it’s coming with Brady at some point. Stock up on points like chips and prepare for the eventual barrage.

The defense needs to take a page out of New England’s book and confuse ten out of eleven players on the field. Nobody is going to rattle Tom Brady, but you can get to a bunch of the other guys out there. Put pressure up front and disguise blitzes and coverages. Make Mike Evans and Cameron Brate outthink themselves as opposed to going after Brady. Finally, someone put a body on Antonio Brown because this dude is a problem and a half.

How the Eagles Lose

Nick Sirianni. It’s really that simple. I’ll give you the perfect microcosm of what’s gone wrong with this Eagles offense. Consider it streamlining for you (or me) so we don’t’ have to comb over the more important details. We leave that for the Jimmy Kempskis of the world.

The play calling gets ahead of itself all the time. Every week. The team has a major issue from Week 1 through Week 5 in the RedZone, and recently taking points off the board. We still see the same mistakes because nothing gets corrected. Nothing gets corrected because players continue to get put in positions to fail. Jalen Hurts hasn’t practiced enough or can’t grasp the timing yet of when to release the ball during an RPO. It’s causing penalties with lineman downfield. Yet we still see this, even with a coach who refuses to call designed run plays.

The Greg Ward penalty was on Ward and the coach. It was the latest example of play calling getting too cute in the one area where you can’t afford to do that. You must use your speed and spacing guys, use your big TE targets, hell, use your dual-threat QB. Don’t ask guys to think more than just executing routes. That’s how they lose.

Ben Simmons made a business decision.

The Sixers have no choice but to bring him back if they want to trade him – anywhere. Nobody won any power struggle, nor is this thing over by any means. Simmons needed to go through basic protocol – including showing up for a COVID test – just to be reinstated with the team. There seems to be some schoolyard social media element to this story, like Simmons took some major loss. He lost money, but that was part of the initial sacrifice.

The bigger issue for me will always be what happens when Simmons leaves. We are in the infancy stages of that with Carson Wentz, but it doesn’t seem too promising in that we will be full of remorse. Not "we" as fans who got on both for poor performances, rather "we" as fans who reflect on team and player dynamics. We look at just how bad things got between the Eagles and Wentz — or the Sixers and Simmons — and contemplate if anything could have been done to salvage that mess before it got to the point of no return.

It’s easy to look at what Simmons is – mainly what he refuses to be – and bank on it never changing, similarly to how we look at Wentz with his flaws. We saw another brutal red zone fumble by Wentz on Monday night just like we will see another scoring opportunity passed up by Simmons in Minnesota, Dallas, Brooklyn, Sacramento, wherever. It’s coming, and we are fully prepared to continue to tell the world, "We told you so!" — even if that "world" consists of people inside our own fanbase. We must remind strangers just how right we were about [insert issue here].

The jury remains out on Wentz, from draft pick to just how good he can be in the league – which is still probably not good. But what if…. what if Ben Simmons figures it out on another team? That’s hard to ignore in a star-driven league like the NBA. How do we still justify what was done in moving him? This isn’t a rhetorical question being yelled through a microphone, rather a legit question about what the barometer of success will be with the inevitable trade.

Will we reduce Simmons’ All-NBA bids and improved scoring down to a question of whether he wins a championship? That’s a tricky ledge to walk, especially if the Sixers aren’t holding up any trophies of their own. It's probably best to learn our lesson with Andy Reid – not reducing everything to winning or losing a championship – and find a better means of measurement.

I don’t know what that is because nobody knows how good Simmons can be if he ever improves in that one area. But this is the only hypothetical question worth asking right now across our entire sports landscape. Simmons could take a small leap in one aspect of his game and instantly be a top 10 player – if not better. Think about it, because it’s much, much … much closer to happening than Carson Wentz winning another Super Bowl.

This isn’t about not making any trade, nor warning about where to trade Simmons. This is a mental exercise in preparation. The young man is far from done with his NBA career and would be a gigantic “one that got away” if he ever did saddle up again with another superstar.

Consider it practice before the inevitable happens. Yea, we talking about practice.

NFL Pick of the Week

There are plenty of Week 6 games to bet on, but Chargers at Ravens is one you'll want to get in on while you can. The Chargers are coming off a ridiculous win in shootout fashion, but their offense blew away a solid Cleveland defense. The Ravens needed overtime to overcome a horrific first half by Lamar Jackson and the Baltimore offense. John Harbaugh’s team hasn’t figured out who they are – at least on offense. Brandon Staley has Justin Herbert playing like a league MVP and the defense will be consistent enough to limit the Ravens receivers. Expect the Chargers to take full advantage of the Ravens’ mistakes, something the Colts failed to do. Chargers win outright but I’ll gladly take points here.