Five over/unders for Eagles' Week 6 matchup against the Bucs 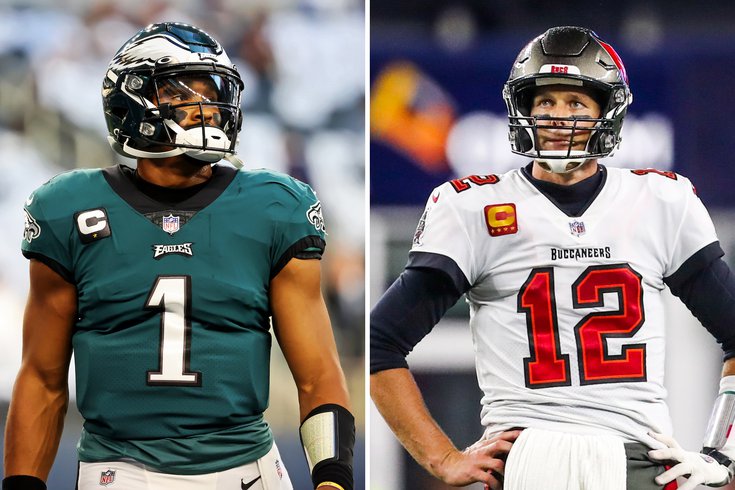 It's a short week for the Eagles, and that means it's a short week — or a long one, depending on how you slice it — for those of us in the media. So, even though it's only been a couple of days since our last batch of Eagles over/unders, it is indeed time for another round before the Eagles host the defending champion Tampa Bay Buccaneers on Thursday Night Football.

Normally we save the over/unders for the end of the week and publish our predictions and such first, but we've decided to give our writers another day to ponder their picks and instead present you with five more numbers that could be important in this week's Eagles vs. Bucs game.

[A quick reminder for those new to our over/unders: Unless explicitly stated otherwise, these are my own numbers based on how I think the players/teams will perform on Sunday — and the advice that follows is where I would put my money if I had to. This week, the first three are actual numbers I've seen at a sports book, in this case FanDuel. The other two are my own.]

This is the current total at most sports books, and if you're thinking that sounds a little high after last week's game against the Panthers finished with just 39 total points, consider the opponent. The Panthers had one of the best defenses in the NFL going into the game — and the Eagles offense looked like trash for three quarters. This week, they'll be facing a defense that while not as porous as the Chiefs, is still extremely vulnerable, especially though the air.

It's no surprise that the Bucs are again the best run defense in the league, allowing just 2.9 yards per carry and just 45 yards per game on the ground. Their passing defense, on the other hand, is dead last in yards allowed and third from the bottom with 13 passing TDs allowed in five games. That could be good news for an Eagles team that doesn't seem to have much interest in running the ball — although Nick Sirianni will likely tell you that the 50 screen passes he calls and all those RPO plays actually count as runs. Against the Bucs, they'd be wise to take their fair share of shots down the field against a depleted secondary that has given up at least 260 yards passing in each game.

In the end, this two-faced defense leaves the Bucs with a middle-of-the-road unit, checking in at 15th in yards allowed and 19th in points allowed. Of course, they balance that out by having the third best offense in the NFL. Four of Tampa's five games have hit at least 58 points, with the lone exception being their Week 4 win over the Patriots at a rainy Foxboro. Expect some points to be scored on Thursday night, even with both teams playing on short rest.

We saw what Patrick Mahomes and the Chiefs offense did to this Eagles defense back in Week 4, and it wasn't pretty. The bad news for Jonathan Gannon's defense is that this Buccaneers receiving corps is likely even more dangerous than what that KC offense brought into town. And while the Eagles defense looked better last week against Carolina, Sam Darnold is no Tom Brady — and if that was a better QB playing against the Eagles last week, the outcome very likely would've been different.

Somewhat surprisingly, however, the Eagles pass defense has actually been solid this season, not allowing more than 271 yards through the air in any game. Some of that is due to the fact that in their two biggest losses of the season (against the two best QBs they've faced), their opponents jumped out to early leads and then relied heavily on their ground game throughout the rest of the day. Still, a trio of interceptions and better performance from the defensive front against Carolina has to be a promising sign for Gannon's unit.

Whether or not Brady hits the over here depends on how long the Eagles can stay in this game. If the Bucs get out to a big lead, we may see less out of Brady than the oddsmakers are predicting. Brady's topped this number in three of his five games this season, but we have a feeling the Bucs may try to run on the Eagles more than they would against most teams, which is fair given what the Birds have put on tape this season.

That's the number currently being offered over at FanDuel, and it's a pretty intriguing one to say the least. Why? Well for starters it's not that far below his season average of 51.2 yards per game despite facing the best rushing defense in the NFL, one that actually held a whole team (the Patriots) to -1 rushing yards for an entire game. But beyond that, it's intriguing because it's almost exactly what the Bucs are giving up on average per game (45 yards) and it's not even taking into account Miles Sanders and Kenny Gainwell, which would take the Eagles up closer to 100 yards. The most the Bucs have given up all season was 76 in their lone loss to the Rams.

All of that being considered, we actually like Hurts to hit the over here. For starters, he can pick up plenty of those rushing yards on passing downs after a play breaks down, when the Bucs defense isn't expecting a run and is likely not in the ideal position to make the stop. Beyond that, the Bucs haven't yet faced a mobile quarterback this season (save for Dak Prescott in Week 1 in his return from that gruesome leg injury), and that added wrinkle will certainly make a difference in how their defense approaches the Eagles on a down-to-down basis. Couple that with the misdirection that comes from those RPOs and QB options, and you can see how this presents Tampa with a unique challenge.

We're not saying they won't be up for it, but a healthy dose of Hurts scrambles combined with a few designed QB runs — assuming Sirianni doesn't wait until the fourth quarter to let Hurts do what he does best — and it's not hard to envision Hurts hitting his season average. The Eagles running backs, on the other hand... well, that all depends if the coach actually decides to use them, which for the first time this season might not be in his best interest.

Lane Johnson will likely be out again for the Birds, complicating things along an offensive line that's already without two starters and has another playing out of position to fill in for Johnson. But that unit played pretty well against Carolina, with the only two sacks of Hurts coming on back-to-back plays at the expense of Jordan Mailata, the player tasked with switching in Johnson's absence.

If the Eagles are as pass-happy as we're expecting them to be against the Bucs, it's hard to see them keeping this under. But even keeping it at two or three sacks won't be the end of the world if Hurts is again dropping back almost every play.

Whatever it is, it won't be enough for Eagles fans.