NFL trade rumors: Are Eagles in the market for Marlon Mack? Will Ertz get dealt at deadline? 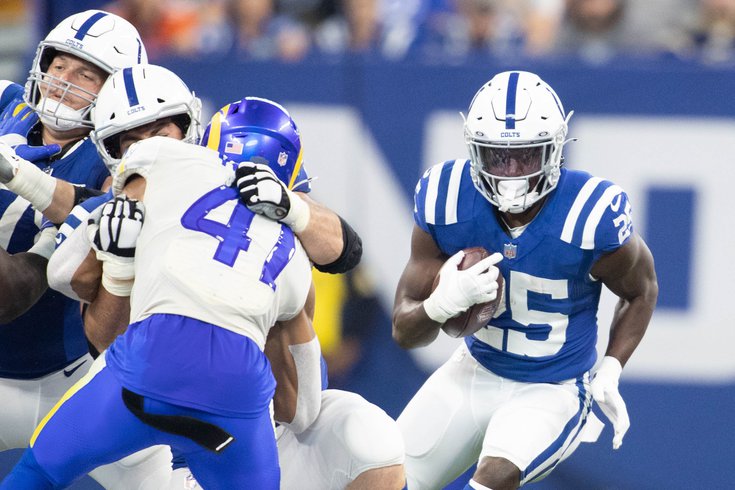 There was never any secrecy around the fact that in 2021 the Philadelphia Eagles are a team in transition. The owner admitted as much this offseason when he used that exact wording to describe a team that was re-tooling after trading away its starting quarterback and firing its coach at then end of a disastrous 4-11-1 campaign.

That re-tooling was expected to continue into the rest of the offseason — and to a certain extent it did — but there were big moves that the Eagles were expected to make, like trading Zach Ertz or possibly Fletcher Cox, clear signs that this team is moving on from whatever remains of the its Super Bowl core from 2018. But then the summer passed, and guys like Ertz, Cox, Darius Slay, Brandon Graham and other costly veterans remained on the roster, in some cases preventing the Eagles from using this transition year to evaluate the young players it has on its roster, not unlike what happened with Alshon Jeffery a season earlier.

So far, the results have been mixed for Nick Sirianni's team in Year 1. Through five games, they have bookend wins over the Falcons and Panthers sandwiched around a trio of losses, including two pretty bad ones to potential contenders in the Cowboys and Chiefs. At 2-3, it's not yet time to give up on the season, but as we've written in this space before, this season was never about the wins and losses, it was about positioning your team for next year, a fact-finding mission in which the main objective was to identify the players you want to keep beyond 2021 and develop said players so that in 2022, 2023 and beyond, you can field a competitive team. Sure, with three potential first-round picks in next spring's draft, evaluating quarterback Jalen Hurts is the biggest point of emphasis for the Eagles, but it goes well beyond that.

So, where does that leave us with three weeks until the NFL trade deadline? Could the Eagles unload some veteran contracts to both save future cap space and allow their younger players to see more of the field?

Over at ESPN, Jeremy Fowler took a look at some of the players who could be on the move ahead of the Nov. 2 deadline, and unsurprisingly, an Eagles player was among those listed. Here's what he had to say on the chances that Ertz gets dealt...

You can't ever sleep on the Philadelphia Eagles potentially unloading a player or two at the deadline. Sources say tight end Zach Ertz thought he was getting traded at least twice in the offseason before things calmed down, and the Minnesota Vikings inquired about the Eagles' other tight end, Dallas Goedert, before eventually landing on Chris Herndon in an August deal with the New York Jets.

Contentious contract talks turned sour for Ertz during the offseason, and the Eagles appeared to be moving on with Goedert. But the Eagles convinced themselves that they would be good, so they kept the roster mostly intact. And Ertz developed a strong relationship with new head coach Nick Sirianni. A win over Carolina puts the Eagles at 2-3, just competitive enough but not the kind of statement that dissuades trading away players. And so, Ertz's name could resurface, though he's probably not willing to take a pay cut at this point. He is playing well in a contract year, with 14 catches for 160 yards and a touchdown.

As for where Ertz could go, league execs have long pegged Buffalo and Indianapolis as potential landing spots.  [espn.com]

That's not surprising, given that it was a total shock that Ertz is back this season in the first place. He's said multiple times how much playing in this city means to him and how he now wants to retire here, but the NFL is also a business. And the only reason he wasn't dealt before the season is because no one offered Howie Roseman enough to make him willing to part with the veteran tight end. That could change as teams jockey for position during the season and begin to realize, you know what, a veteran tight end is exactly what we need.

With Indy currently sitting at 1-4 and them already potentially owing the Eagles a first-round pick for Wentz, it's hard to see them aggressively pursuing Ertz. But the Bills, who look like one of the best teams in the NFL, maybe they circle back around and decide that adding Ertz is the right move, even with Dawson Knox balling out. It's definitely a situation worth monitoring, especially with the Eagles having Dallas Goedert waiting to emerge as the official TE1.

And then there's this one, that completely came out of left field and made me do a double take.

Could the Eagles actually be deadline buyers? And if so, would they really be looking to bring in a running back, the one position that Sirianni's offense utilizes the least? Fowler seems to think Sirianni's familiarity with one of his former players coupled with a relatively low asking price could be enough to entice the Eagles.

The feeling around Indianapolis is the Colts want to do right by running back Marlon Mack, who has requested a trade, but there is not much interest just yet. Things could pick up closer to the deadline, and a conditional late-round pick probably gets it done.

The Eagles' Sirianni was Indy's offensive coordinator when Mack produced a 1,000-yard season in 2019. With the Eagles' tailback identity still in flux -- quarterback Jalen Hurts has 42 more rushing yards than any Eagles back through the season's first five weeks -- a change-of-pace player could help. Miles Sanders (48 carries for 214 yards) remains terribly underused in that offense, and backup Kenneth Gainwell has 21 carries for 100 yards.

Meanwhile, the Kansas City Chiefs have looked into Mack, too. Clyde Edwards-Helaire is expected to miss extended time because of a knee injury suffered Sunday, so perhaps they add Mack to pair with Darrel Williams and Jerick McKinnon.  [espn.com]

That ... makes no sense whatsoever. For starters, the Eagles only have two running backs dress on Sunday — and they barely use the ones they have. Sure, it might only cost a conditional pick, but why would Roseman give that up when his coach is allergic to running the ball. Plus, adding Mack (and actually using him) means taking whatever little carries there are away from Miles Sanders and Kenny Gainwell, when you can easily make the argument that those two need the ball in their hands much more often. I'm not sure why adding a running back to this situation would help. They already have Jordan Howard and Boston Scott on the practice squad.

I understand Sirianni's connection to Mack and get that he's only 25 years old, but bringing in another running back — and trading away a pick, even if it's a conditional one — just makes no sense for this team.

The only way I could this happening — and we're really connecting some dots on this one — would be the Eagles trading Ertz to the Colts for Mack and a pick. Maybe that player-kicker helps Roseman get over the low offers he's gotten so far when shopping Ertz. Hey, crazier things have happened...