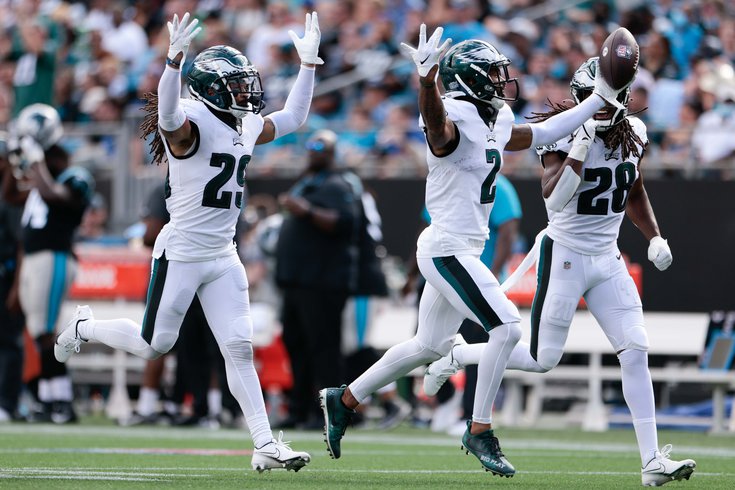 Darius Slay had his best game as an Eagle.

In their Week 5 win over the Carolina Panthers, the Philadelphia Eagles played 67 snaps on offense, and 71 on defense. Let's just get right to the snap counts, and some notes.

Analysis: For the better part of this game, Hurts didn't play well, but he and his teammates kept fighting, and there's something to be said for that. There were times during the 2020 season in which Carson Wentz had a bad first half, and the team as a whole just went into the tank.

You have to like what Hurts brings to the table as a competitor and a leader, but there's still quite a bit to be cleaned up. He's got 12 games to make improvements and show more consistency.

Analysis: Sanders just isn't seeing the game well right now. He's missing some pretty obvious openings, and I don't think I've ever seen a running back go out of bounds in clock draining mode TWICE in one game. It wouldn't surprise me if he began losing some snaps to Gainwell.

Analysis: Watkins finally passed Reagor on the snap count list, and he rewarded the Eagles with a 53-yard reception that led to a TD. He should clearly be the No. 2.

It's not a great sign for Arcega-Whiteside that he couldn't even play in a game in which Nick Sirianni called like 300 screens.

Analysis: The timeframe for Tyree Jackson's recovery is coming up, so it'll be interesting to see how the Eagles use him initially, and then if he can do anything to earn more playing time.

Analysis: Dickerson went down with an injury, and did not return, so that's a development worth monitoring.

Mailata gave up sacks on consecutive plays, but the second one didn't seem to be a product of him having to move from LT to RT. There seemed to be some confusion on the timing of the snap. In other words, just because he will be dinged for two sacks, I don't think he necessarily played badly. I'll be curious to check him out on the re-watch.

I'm kind of shocked by how Dillard has played. If you had told me coming out of training camp that Dillard would have to start three games because of a bunch of injuries, I would guess that those games would have gone badly for him. But he's been good.

Analysis: The defensive line as a whole played well Week 1 against Atlanta, and then a bunch of guys not named Javon Hargrave went invisible for a few weeks, before they put together a solid group effort against (let's be honest) a terrible Panthers offensive line.

Analysis: Taylor got his most action of the season Week 5. I'll be curious to see if he played well on the re-watch. I'd still like to see Shaun Bradley get some snaps too, but, baby steps.

Analysis: Like the defensive line, the secondary had its best game of the season since Week 1. Slay picked off two passes, and Nelson grabbed one. The Eagles played more man defensive on Sunday, which accentuated Slay's skill set.

McLeod also had a big hit on the receiver on Slay's first pick.