Breaking down the Eagles' punt block vs. the Panthers, with gifs and stuff

With four minutes left and the Eagles down by five on Sunday against the Panthers, T.J. Edwards blocked a punt that set up the go-ahead score. It was probably the biggest play of the game in the Eagles' temporarily season-saving win.

First, let's show the punt block, and then we'll show how that play was schemed up as a result of trial and error.

On this punt block scheme, which is a stunt run by Edwards (57, yellow arrow below) and Shaun Bradley (red arrow below), it's Bradley's job to occupy two blockers. At the snap, Bradley is going to get a piece of the long snapper, knocking him off balance before forcing Panthers personal protector Sean Chandler (34) to block him. Edwards will then loop around the long snapper behind Bradley, cutting the corner as tightly as possible to give him time to get to the punter. 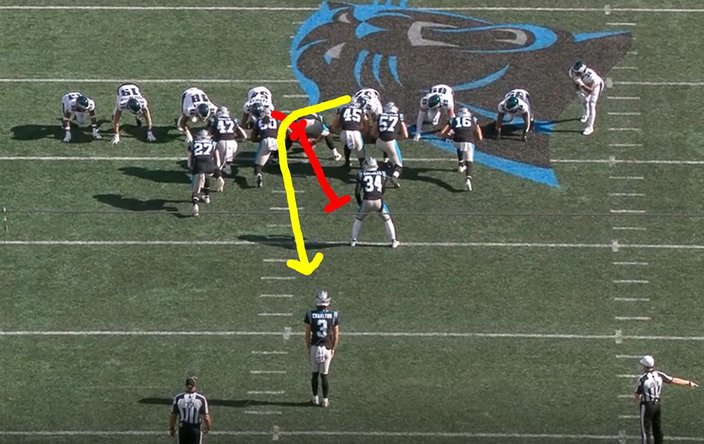 Here's how it unfolded:

The punt block was a result of communication during the game. Special teams coordinator Michael Clay had their regular rush when they got particular look from the Panthers' punt team, and a check to the stunt that could be called on the field.

Earlier in the game, the Panthers showed the same look, here:

As you can see, the personal protector picks up Bradley, and the long snapper blocks Edwards. After that punt, both Edwards and Bradley suggested to Clay that if they got that same look later in the game that a check to the stunt might work.

“It was something we worked on all week," Edwards said. "We knew that if we got a certain look from them, if they blocked it a certain way, we could switch it and go to a different kind of rush. It worked out perfectly."

Clay is always looking for feedback from his players on the field.

"These guys have been outstanding in terms of understanding what we're trying to do, accomplish on the return games, our coverage games, so the more communication I think, the better for us, and just the more trust we have to say, ‘Hey, go out and play. Go make a play.’"

The punt block on Sunday was also partly a result of a lesson learned on a near punt block against the Falcons Week 1. It was a similar scheme, except it's K'Von Wallace (42) who was looping in behind Bradley, who again, was able to clear two blockers. This punt block was unsuccessful because Wallace ran into Bradley's back on the way to the punter.

The Eagles made a subtle adjustment. On Sunday in Carolina, Bradley didn't just occupy the block of the personal protector, Chandler (34). He also made sure that he crossed Chandler's face, so that when he was blocked, he would also be cleared out of the way of Edwards, who was following directly behind him. Watch as Bradley makes a clear, purposeful move to his left (our right) to clear out of the way, unlike in Week 1 when Wallace didn't have a clear path to the punter:

Had Bradley tried to plow forward directly into Chandler like he did Week 1, it might have simply caused a logjam once again, and the punter might have gotten the punt off.

Clay turned 30 in August, and he is the youngest coordinator in the NFL. The early returns on his hire are encouraging.