Embiid, Sixers teammates prepare for Simmons' return: 'It doesn't need to be awkward' 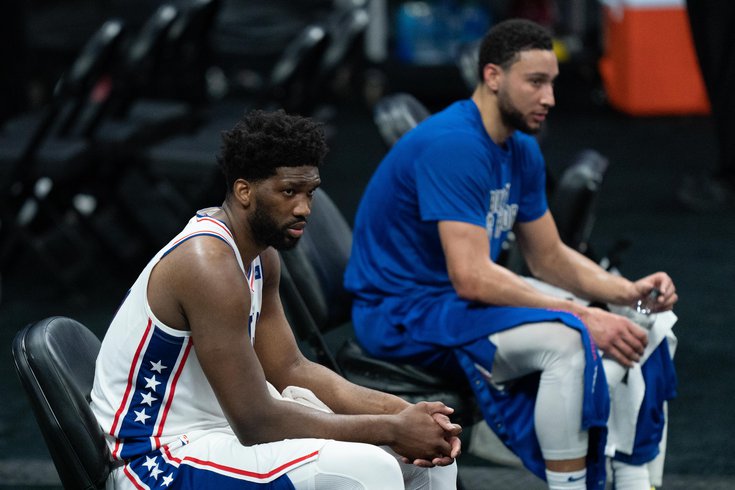 Has Ben Simmons been a distraction? Are the Sixers prepared to accept him back into the locker room? Can you know the answers to these questions when he hasn't spoken to certain power players in the organization since the season ended? Fair questions to ask, especially when Joel Embiid is one of the people who has been boxed out, as he admitted himself on Monday night.

"I personally haven't talked to him since the season ended. Obviously, I tried, but it wasn't successful as a lot of my teammates have. It's unfortunate the whole situation happened, but we're a better team with him on the floor. I think there are going to be some adjustments, but it doesn't need to be awkward," Embiid said. "We are professionals, we want to win. I want to win. He gives me the best chance to win, so that's what I'm going to go with."

Save for Embiid's extended rant on how the team has catered to Simmons with their roster-building moves, the Sixers' players have said all the right things about welcoming Simmons back. There has been no mystery about their stance — the players have stated firmly that Simmons coming back is good for the organization and gives them a better chance to win than if he spends the season sitting in his new L.A. home.

There is some mystery to, well, exactly how this is all going to play out. A lot of that comes down to Simmons himself rather than the team, Simmons' agent, or the other interested parties involved here. Word broke late Monday about Simmons arriving in Philadelphia to take a COVID-19 test, one of the first steps he needs to take in order to be cleared to play. Things accelerated quickly after reports circulated Monday that he was close to returning — so quickly, in fact, that Simmons appeared disconnected from both his agent in the team in the process of returning.

Sources: Sixers were unaware Simmons was flying into Philadelphia today. The organization was in constant contact with agent Rich Paul, but Simmons simply showed up at arena to take his Covid test prior to Sixers-Nets tip -- and that's when team officials knew he was in town. https://t.co/j3cGnC6mgG

This sort of thing likely matters to the people at the higher office levels trying to make sense of all this. It's a bit simpler for the guys on the bench and playing on the hardwood, who have tried to keep themselves focused on what they control, rather than the overarching soap opera the team is involved in.

"I'm trying to keep everybody focused. I'm focused on basketball. I'm focused on whatever we have here, whatever we've been building. Guys that come in, there's going to be adjustments and stuff, but everybody has to buy in, because if one or two people don't buy in, you have no chance," Embiid said Monday. "We just need to buy in and believe that we have a chance to win, which I believe with the group that we have, and you know obviously him being back, I believe we have a chance to win."

The big guy's relationship with Simmons is sure to be a topic of intense scrutiny in the days and weeks to come, in spite of Embiid's insistence on social media over the summer that things are better than the media has made them out to be. After an offseason of no talk, Embiid's pointed comments recently, and the leaks regarding Simmons' thoughts on their fit, combustibility is high heading into the season.

Role players naturally have a different sort of relationship with Simmons, especially the team's shooters, who take and make a lot of threes that Simmons creates with his pace and power. To some degree, guys like Isaiah Joe believe they can simply pick up where they left off.

"I don't have any bad blood with anybody. Ben is a great guy, he's still a friend of mine, so whenever we do see him, I'm going to greet him like anybody else would," Joe said Monday. "Hopefully we can get him back on the floor, because we are a better team with him on there."

"The most important thing is just for us to stay close with each other. This whole process has made us [come together] a lot better between each other...this just shows we can't be spread out on islands, we have to be together and be one unit. I think it shows even on the court that we've learned to adapt."

With one preseason game left to play before they open the season in New Orleans on October 20th, there isn't exactly a lot of time to figure out how to move forward in this uncertain reality. Doc Rivers was optimistic about Simmons' ability to get up to speed quickly when he discussed the pending return prior to Monday's game vs. Brooklyn, but admitted he ultimately hasn't seen him and won't be able to judge until everyone meets and puts their heads together.

The longstanding point guard of the team and de facto controller of the offense should be able to find the flow relatively quickly, assuming he hasn't grown complacent over the last month or so. But he should come in knowing that this group is happy with how they're playing early in the preseason, the man in the middle most of all.

"You can see by the way we're playing. The ball is moving, it's not sticking, everybody is touching the ball," Embiid said Monday. "It's either threes or layups, which is a good way to think about it. We were really just focused on the guys that are here. We don't worry about outside and what's going on, that's more the front office's job. We get paid to just be basketball players and win games. The other part, we never really focused on that."

In other words — welcome back, Ben, but you're still just one guy that's part of a larger collective.