Joel Embiid responds to latest Ben Simmons reports: 'Our teams have always been built around his needs' 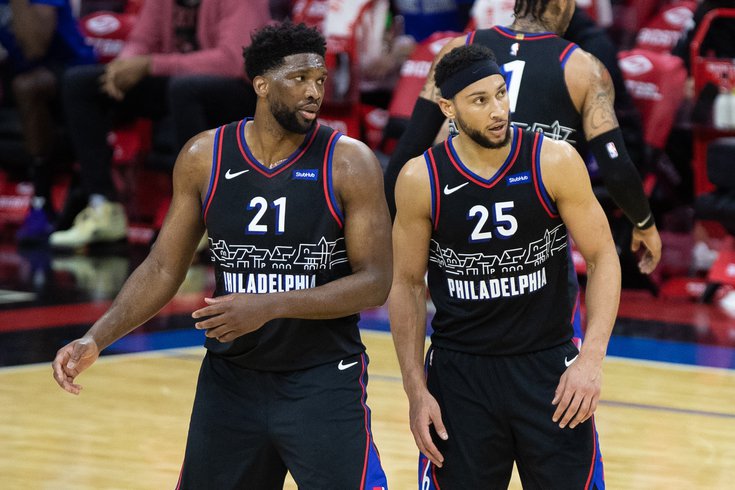 Earlier this week, a report from The Athletic suggested Ben Simmons (or people around Ben Simmons) believed the partnership with Joel Embiid had run its course. On Thursday, Joel Embiid had a chance to weigh in on the report, and in classic Embiid fashion, he expressed his disappointment in the situation while noting they are better with Simmons in the fold.

For those playing catch-up, Sam Amick of The Athletic reported Tuesday that in spite of Philadelphia's best intentions at media day, there was no chance Simmons was going to be NBA Aaron Rodgers and show up to the place he has stated he doesn't want to be. At the top of the list of his issues, according to Amick's reporting, is the idea that he and Embiid have exhausted themselves as a partnership.

When it comes to understanding Simmons’ hardline stance, one that could become quite costly soon if he starts missing games, it’s all so layered at this point that it’s hard to know where to begin. He’s clearly hurt by the way he was, in his eyes, scapegoated after his widely criticized finish against the Hawks and how that blame-game tone remains. But the issues between Simmons and the Sixers started long before then.

Yet of all the problem areas to explore, there’s none more unyielding and impossible to ignore than this: People who have intimate knowledge of how he sees this situation continue to insist that he’s done playing with Embiid. There’s nothing personal about this choice, it seems, but the 25-year-old Simmons has clearly decided that his career is better off without Embiid blocking the runways in the paint that he so badly needs to succeed.  [The Athletic]

Speaking for the first time with the media since that report dropped, Joel Embiid was asked for his response. And in a wide-ranging answer, he tried his best to assert that they're better off with Simmons on the floor while unloading a clip of grievances in the process:

REPORTER: What was your reaction to the report where Ben said the relationship apparently with you has run its course?

EMBIID: I saw it. I’m not sure. I don’t know if it came from him or whatever, but over the past few months stuff has been put out there, looking at the reaction of him not being here. I feel like it’s fair to assume it’s coming from whether it’s his agent or his people or whatever.

I feel like over the years the way our team has been built around, you look at last year, the whole starting lineup shot — I was the worst three-point shooter in the starting lineup, and I shot 38 percent from three. We’ve always had shooters, and I feel like I can really play with anybody. I can make anybody better on the court. I don’t necessarily need shooters, but I feel like over the years, you look like when we signed Al, it’s because we needed a stretch five, just to make sure that was [there]. Most of my career, I’ve had to kind of step out to the three-point line, which I don’t mind. I like to be a basketball player, I like to do everything on the basketball court.

But I feel like our teams have been built, whether it’s the shooting needed or stretch five and all that stuff, I feel like he’s always had it here. And we still have it. Seth, one of the best three point shooters ever. Danny Green, Tobias is a 40 percent three point shooter. Furkan coming off of the bench. At times Shake, I think he can be a better shooter, but you know, he can get hot. We just added George. So I feel like, our teams have always been built around his needs.

It was kind of surprising to see. We’ll say that, even going back to, I mean, the reason we signed Al. We got rid of Jimmy, which I still think it was a mistake, just to make sure he needed the ball in his hands, and that’s the decision they made. Like I said, it is surprising.

But I’m really focused on the guys that are here. The situation is disappointing, borderline kind of disrespectful to all the guys that are out here fighting for their lives. Some guys rely on the team being successful to stay in the league and make money somehow. Because if you’re on a winning team, you’re always going to have a spot in the league, just because you’re on a winning team and you contributed.

We are a better team with him, there’s no question about it. We still hope he changes his mind, but I kind of owe it to these guys to worry about what we have here. That’s the fun of the job. To kind of figure out what’s going to happen, that’s not my job, I’m not the GM, I’m not an owner, so that’s none of my business, honestly.

Even by Embiid's standards, that was a doozy, roughly four minutes of him talking that ended in diplomatic fashion after roughly three-and-a-half minutes of body blows to Simmons. It's a level of honesty that, frankly, he has refrained from when addressing Simmons and the team construction over the years.

Frankly, it's hard to find much wrong in what he said. As we noted in our coverage of Philadelphia's second-round implosion earlier this year, several different regimes have now made an effort to build out around Simmons and account for his hyper-specific style, all the while making attempts to hedge their bets that have left the point guard and the franchise center working from a yearly reset.

Reading between the lines of the quotes Sixers figureheads have delivered over the last few weeks, they seem to be contradicting their own message that they want Simmons back. Doc Rivers has lobbied to get him back, and then compared him and his camp unfavorably to 2020 election deniers. Embiid has repeatedly said they want him back and are better with him, and then steps up to the mic to deliver a borderline State of the Union address on why claims from Simmons' camp are bogus. Everyone already appears to be fed up with the situation, and we haven't even reached October yet, nor has Simmons made the appearance many with the team have insisted will come at some point.

Until he does — or until the Sixers make a move — Embiid and the guys who are in camp with him will continue moving along and trying to find a way without him. At practice Thursday, Embiid spoke of the need to bring along young guard Tyrese Maxey, who is tasked with becoming a true point guard after primarily honing his scoring skills at lower levels.

"He's been taught how to score the ball and he's a really good scorer, but he has to be a point guard. He has to get guys in their spots, he has to call plays, at times we've lacked that a lot in the past," Embiid said. "One thing I tell him, one thing we might miss quite a bit is the pace. He's just got to push the ball every single time he has it. He has to push the ball, he can attack and he's going to get to the free-throw line and make them, or he's going to find guys...we need that pace, and he needs to be able to get to the paint, finish, and find other guys."

As one point guard sits out, another is molded, and the Simmons saga continues to grow more dramatic by the day.