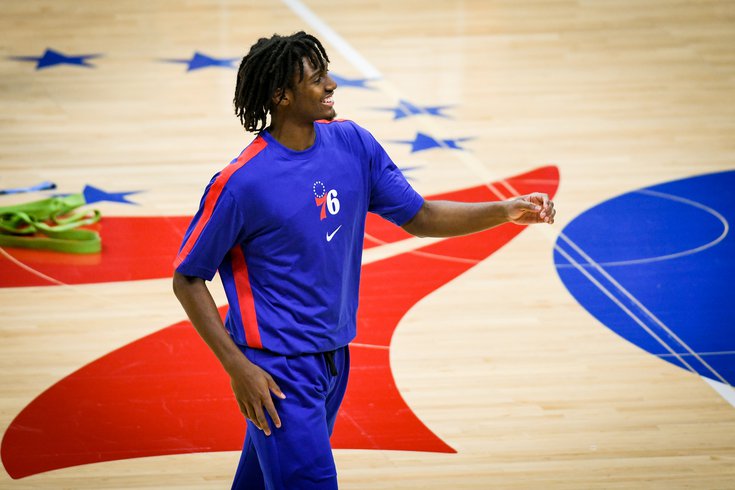 It is easy for those of us on the sideline — or more accurately, sitting behind the people on the sideline — to suggest the Sixers should take a hardline stance with Ben Simmons. Fine him the maximum amount allowed? Sure thing. Let him rot in obscurity rather than trading him to satisfy his request? Sounds good to a lot of people! For the Sixers, though, every action related to Simmons has consequences. And the most obvious ones will be felt on the basketball court, where they hardly have a like-for-like replacement lined up behind him.

"The team is kind of in a weird spot," Tobias Harris said at media day. "I think that PG position is one of the most important positions in the NBA. And so him not being here, it is disappointing. But I said to guys on the team, to all of us, he's still part of our team. Ben's still part of our team. He's got 15 guys in that locker room, probably seven or eight of them that played with him last year, that's still his brother, he's still our brother as well."

But what does moving on look like? Whatever you think of Simmons as an anchor for a contender, he does a lot of things for this basketball team. He sets their pace, he moves around the defensive chessboard, he hits open shooters, and yes, he opts out of the offense in most crunch-time situations. A trade that returns a readymade, high-level contributor looks to be near impossible in the short term — that's a big reason they are making public and private pleas to get him back in the mix to begin with.

If the Sixers' stated conviction to ride this out is authentic, if they are really going to hold on tight until they can kiss and make up or just ship him out for a price they feel is fair, they are going to have to get creative.

That will start with the man who many Simmons supporters believe has gotten off easy this offseason: Doc Rivers. Fresh off of a media tour in which he addressed the Simmons situation many times over, sometimes to his own detriment, he is now tasked with trying to plot a course for an incomplete team. And Rivers is a head coach who believes expectation-setting is a core component of his job, which Sixers players even commented on last year. Rivers made clear the world would revolve around Embiid, who he in turn expected to show up in elite shape and ready to lead on and off the floor.

It would appear to be a bit trickier to go through that process with Simmons refusing to even show up. But Rivers insists he'll have no trouble, focusing on what he can control rather than what he can't.

"Clearly not the easiest situation, but individually it's easy. I look at the young guys we have, it's amazing," Rivers said. "Individually it's easy to set their goals and their needs for where we need them to be for us to take the next step. We're going to focus on who's here, we're going to try build our team out to who's here right now, with hopes that we do have Ben at some point. But right now, that can't be our focus. Our focus, I can only touch the people who are in front of me, and so that's my goal right now is to get their mindsets right about moving forward."

"He's special, and I'm sure everybody can see that. If he continues to do what he does, he's going to be a really special player in this league." —Danny Green on Tyrese Maxey

As President of Basketball Ops Daryl Morey was happy to add on afterward, Philadelphia's roster is on the younger side this year, with players they hope are all on the upswing. Last season, Doc Rivers and his staff absolutely raved about the work ethic of their low-minute group, with Tyrese Maxey and Paul Reed leading the way. In Reed's case, the Sixers still probably have a small role in mind for him at best, with Andre Drummond in the fold and more competition for minutes in the frontcourt this year. But Maxey looks primed for a potential breakout this year, with or without No. 25 in the mix.

Even the Sixers can hardly withhold their excitement assessing Maxey, a personable kid who has been said to basically be lapping the competition in practice reps since joining the program. Danny Green, now the team's elder statesman, sees big things in Maxey's short and long-term future.

"He's special, and I'm sure everybody can see that. If he continues to do what he does, he's going to be a really special player in this league. He carries himself like a star, and I believe one day he will be a star," Green said. "He's very mature for his age, smart, understands the game, and he has a good group around that can help him, and Doc. Can't do it alone, obviously we have to help him, but Doc has coached some pretty good point guards and [will] teach him how to run the ship."

The question of how much to put on Maxey's plate is one we've discussed plenty this offseason, and Rivers is certainly not naming starters or setting things in stone on media day, other than to say the Kentucky product would have a big role this year regardless of whether Simmons is back. Based on how he finished the year, everyone should probably scale it back a little bit — Maxey was a part-time player with real warts last year — but he has absolutely earned a chance to prove himself in a big role this season.

To prepare for that, Maxey has been consistent with his goal for the offseason: "getting one percent better every single day." It comes up in every interview he has done since Philadelphia flamed out of the playoffs, and now we're close to seeing what the results look like. But there are more practical, tangible things Maxey worked on while striving for that overarching goal. The second-year guard spent part of his offseason digging in on film study, trying to improve his pre-game routine so that he's best prepared to attack an opposing defense or make reads on the defensive end of the floor. Less sexy than improvement as an off-the-dribble shooter, naturally, but a critical part of Maxey becoming a fixture in the rotation.

Having a former point guard as his head coach should help Maxey, who was not in much of a position to lead as a player or person last year, especially in an unprecedented and strange season for rookies in particular. Rivers believe Maxey has benefitted from simply being in the heat of a playoff series with this group, cognizant now of what he'll face from his own teammates when he's back there.

"Game seven was a great example, we've talked a lot about that, him and I. He wasn't prepared in some ways for the other guys in those games [to say], 'Give me the ball,'" Rivers said. "I had this with [Rajon] Rondo all of the time because Rondo had Kevin Garnett, Paul Pierce, and Ray Allen, who were hot every play in their minds. And I said, 'No is going to be a really important word for you.' The same thing will happen for Tyrese as well."

Rivers, ever the salesman, made an effort to dress up last year's eventual flameout as an opportunity the Sixers were never expected to have, an overcoming of tepid preseason expectations to climb to the No. 1 seed. No one wants to hear that, and we certainly aren't going to pretend the second-round loss is acceptable because of what beat writers predicted before the year. But Rivers made an important point on Monday that will help everyone, not just young guys like Maxey — they're no longer teaching a new system, simply refining what they already have in place.

"I just think being together the second year makes us a better team," Rivers said. "Joel was asking what we're going to do tomorrow [at practice], and I just said pick up where we left off. We don't have to teach for three hours of practice with no conditioning, which we had to do last year. I think that will be an advantage."

"Coach had to work hard to put the number one defense on the floor last year," Daryl Morey added. "And in my discussions with him and Dan Burke and the rest of the staff, now we have that foundation and they can work on the next thing and the next thing."

Devil's advocate — the Sixers have never really had a defensive problem since Embiid and Simmons took the floor, and their offense still remained a level below where it needs to get in order for Philly to join the inner circle of contenders. Without Simmons, the question will be if they can march toward that offensive goal without their defensive identity falling to pieces, a real concern even with Embiid anchoring the back end. This is a team with a lot of potential targets for opponents to attack, and without their roaming amoeba to work with at the moment.

In any case, the Sixers march onward, telling their version of this story as Simmons and his camp lurk in the background. The dynamic has been fascinating so far, with the Sixers publicly and privately insisting they never really wanted to move Simmons in the first place, pinning the responsibility on him even as they attempt (perhaps futilely) to bring him back into the fold. Emboldened by the length of the contract he has left and the unprecedented nature of NBA holdouts, the Sixers maintain this won't distract them, that their group will only focus on basketball.

Ultimately, they are realists. There's no such thing as a halfway crook. And if push comes to shove, they will leave him behind if it's what the situation calls for.

"We hope the situation could get resolved. If it doesn't, we move on and we get this thing going," Harris said Monday. "Because at the end of the day, the other 29 teams that have to play against us do not care. They come in and kick our butt and we need to be ready. That’s the reality of it, really.”